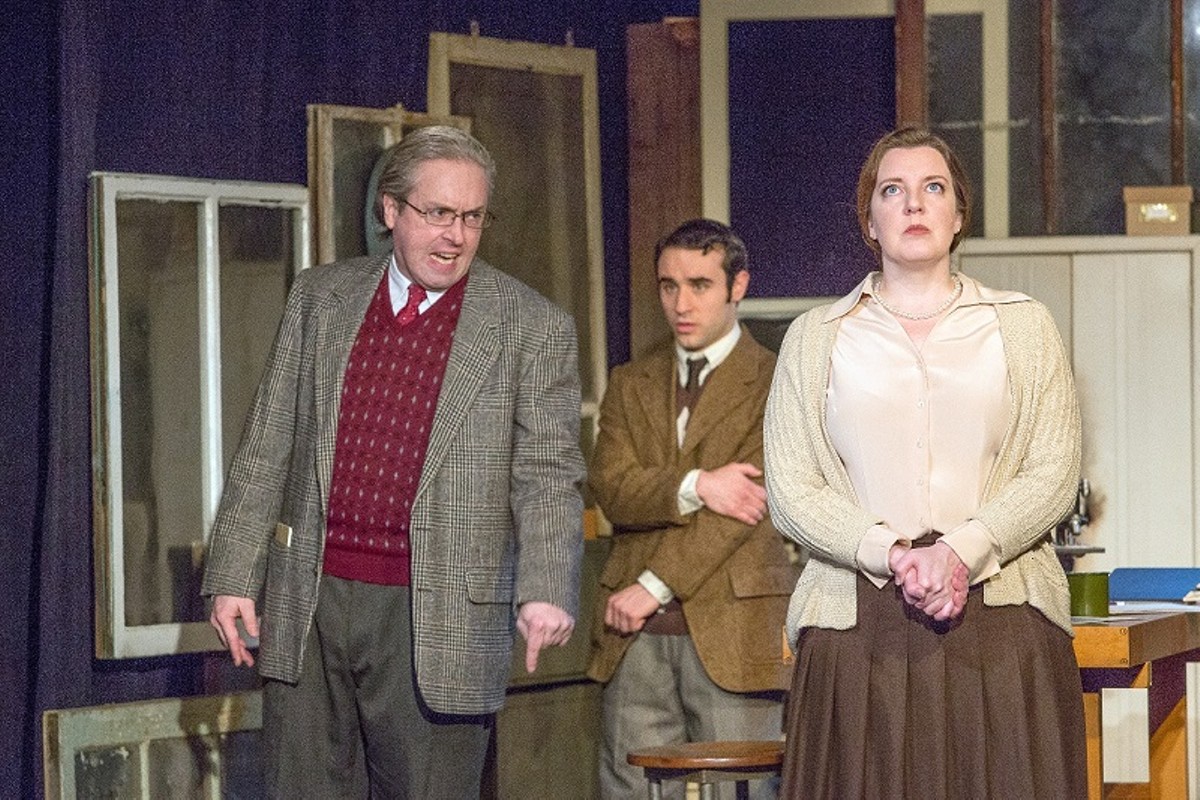 You don't go to a play about scientists expecting poetry, and yet it's a constant presence in Anna Ziegler's historical drama Photograph 51. A lightly fictionalized account of the search for the structure and inner workings of DNA, Photograph 51 follows two groups of scientists as they struggle with faulty equipment, develop new techniques and maintain grueling hours to answer the big questions about life and genetics. Mounted by the West End Players Guild and directed with scientific precision by Ellie Schwetye, the current production of the 2015 play is a beautifully told story about how life flourishes and fades away, and about how death is not the end of anything really. Little bits of all of us remain in the people we leave behind, like fingerprints on an empty glass.

Dr. Rosalind Franklin (Nicole Angeli) is the rare woman scientist in post-war Europe who moves to King's College in London on a fellowship. She's got the credentials to justify a leading position, yet she learns upon arrival that she's meant to be an assistant to Dr. Maurice Wilkins (Ben Ritchie) and not in charge of a project, as she'd believed. She'll also supervise Wilkins' Ph. D candidate, Ray Gosling (Ryan Lawson-Maeske).

Angeli stares down the very proper Wilkins with an unnervingly direct gaze as she tells him what work she'll do and what she won't, while he gasps and stammers and physically recoils from the power of her personality. He reluctantly agrees to be partners, and then sets Franklin loose to use her magnificent brain and camera skills to discover what the structure of DNA looks like and how it functions.

The structure of the play mirrors that of DNA, with the two teams of two working side by side on stage in two labs separated by a wall. Watson and Crick drink and kibbutz and periodically go to London to sniff around Wilkins' lab to see if they can glean any helpful data. Wilkins and Franklin work in an uncomfortable detente, rarely speaking or keeping the same hours.

The play's dual narrators further the helical structure. Gosling explains the work and the small leaps forward, while American Don Caspar (Alex Fyles) exchanges exuberant letters with Franklin about her work and the breathtaking images she captures through her mastery of X-ray crystallography; these letters reveal something of her inner life and thoughts on her own work.

Wilkins and Franklin are similar people in many ways, or perhaps reflections of one another. Ritchie plays Wilkins as so stiff that he's almost frozen; he rarely moves, weighed down by interlocking layers of formality and indirectness that he wears like cast-iron armor. Wilkins is a crushingly lonely man devastated by the abandonment of his wife and the loss of his child, and he starts to believe Franklin might be the right woman for him. Several times he attempts to start over with his silent lab partner, as if better manners or a more politely contorted language will bring them closer.

As good as Ritchie — and really the entire male cast — is, it is Angeli's Franklin who fires your imagination. She's a self-contained woman, also solitary, but by choice: Her work is all that matters to her. She often stands in the center of her lab, eyes scanning the most minute details of photographic plates, and a small smile of satisfaction tugs at her mouth when she pins a fact in place. You don't expect scientific discovery to be so enthralling, but Angeli shows the real satisfaction that comes with seeing something no human being has ever witnessed. Her Franklin is a singular figure in the male world of science, set even further apart by the rigor of her work, her thought, her commitment to proving — never hypothesizing, only proving — the structure of DNA and how it replicates.

Photograph 51 also demonstrates the differences in how men and women work. To the Cambridge team, the DNA puzzle is a race to win so they can reap the rewards of fame, fortune and women. For Franklin, it's a personal struggle with a problem that will benefit all humanity. "When I was a girl, I prided myself on being right — because I was always right," she says at one point. It's being right, not being first, that matters.

When Wilkins, in his shortsightedness, shows Franklin's perfect image of DNA — the eponymous photograph 51 — to Crick and Watson, he guarantees that she will not be the first, and a Nobel Prize is lost even as another is won. Franklin is right, though: History will forget her for quite a few years in the rush to praise two men.

Franklin and Wilkins talk about that too, albeit obliquely. Twice they discuss a production they saw of A Winter's Tale. Wilkins offers his pet theory that because Hermione named her daughter, she was able to live rather than die. Franklin replies that she doesn't recall who played Hermione; "she simply didn't stand out." With Photograph 51, Anna Ziegler gives Rosalind Franklin a name again, and Nicole Angeli makes her stand out — her Franklin is as remarkable, as miraculous as life itself.