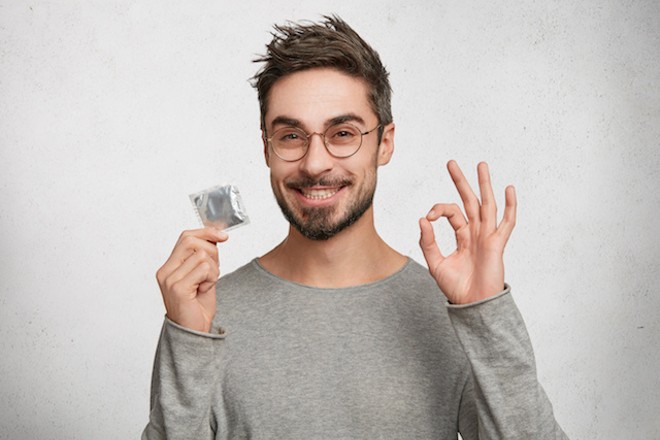 SHUTTERSTOCK/WAYHOME STUDIO
If someone hands you a condom tonight, take it.
Some seemingly counter-intuitive advice from your pals at RFT: Don't be alarmed if a stranger approaches you in a St. Louis bar and tries to give you a condom tonight. No, it's not just some creep — it's simply a volunteer from Planned Parenthood trying to help you (safely) get laid.

The effort is part of the organization's annual "Condom Crawl" in recognition of World AIDS day. The goal is to get bar patrons to practice safer sex, as well as to encourage regular testing for sexually transmitted infections.

“The Condom Crawl is an opportunity for volunteers and staff to engage with the community, share our services, and enjoy a fun night out,” Mark Halastik, development officer at Planned Parenthood of the St. Louis region, says in a statement. “We are excited to be working with such a diverse group of volunteers. We look forward to reaching a wider group of people, many of whom will choose to visit one of our health centers for testing, treatment, or other services.”

The group expects to distribute some 5,000 "safer sex kits" in the St. Louis area tonight. In addition to the condoms, those kits will include lubricant and STI/HIV testing information. In tandem with the Condom Crawl, Planned Parenthood will be offering free testing to those under 25 at all local locations.

According to a press release, there are more than 6,000 individuals living with HIV/AIDS in the St. Louis area, with more than 200 new cases each year. Additionally, St. Louis has some of the highest rates of chlamydia and gonorrhea in the country.

In other words, free condoms from strangers is a pretty damn good idea. Check out the list below of the neighborhoods Planned Parenthood will be, starting at 9 p.m. tonight — and stay safe out there.