Walking into a construction zone that is the future Puttshack at City Foundry STL is about what you’d expect. The space is extremely raw with exposed beams, unpainted cement and a steady stream of neon-shirted workers wearing hardhats bringing a minigolf course to life.

But look to the right, and you’ll find something unexpected: a woman with spray cans set against an open wall. This is Indie 184 — a world-renowned graffiti artist who is hard at work transforming that blank wall into what will be a vibrant mural celebrating street art, St. Louis and, of course, the forthcoming Puttshack.

Indie began painting the mural last Thursday and will wrap up the work at a later date.

“It’s thrilling to say the least,” she says, “and I guess that’s what graffiti is all about, like that rush. … I’m up for the challenge, and I’m going to do my best.”

The project came about as a collaboration between Puttshack — a contemporary reimagining of minigolf that includes music, drinks and world cuisines — and CASS Contemporary, a Tampa, Florida, gallery that also facilitates larger-scale projects between businesses and artists. The gallery previously coordinated a mural by German artist Case Maclaim that runs alongside the main drag of City Foundry.

“We’ve worked with her in the past, and her work is just really cool,” says Tobin Green, CASS project manager. “It’s very bright and colorful, a lot of cool mixed media, and it’s approachable. People really like to engage with it.”

Indie worked with Puttshack to come up with the design for the mural, which incorporates its brand colors, her trademark bubble letters and subtle St. Louis imagery, such as the fleur de lis. “I heard that the City Foundry was filled with graffiti before, and I think they wanted to return to that essence like the graffiti culture,” Indie says. 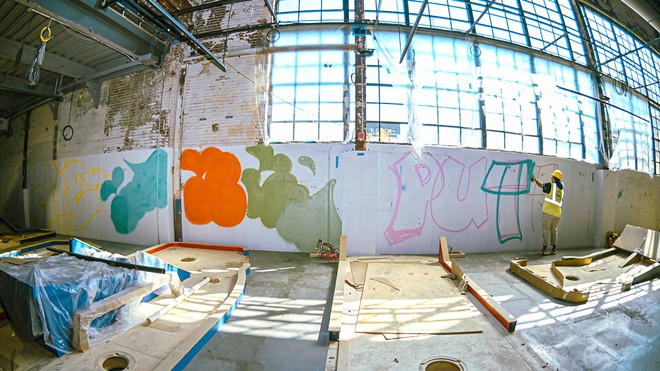 Indie 184, a.k.a. Soraya Marquez, first learned about street art and graffiti culture growing up in New York City. Taking the subway or riding the bus, she’d notice the graffiti, thinking of it as a kind of secret society within the city. Then, when she was 11, she read two landmark books about graffiti — Subway Art by Martha Cooper and Henry Chalfant and Spraycan Art by Chalfant.

They changed the trajectory of her life. But the effects weren’t immediate.

In her early 20s, Indie was working as an administrative assistant at a nonprofit, which was working with B boys, graffiti artists and other creative people. She connected with other artists and learned about the culture, starting to paint herself in the process.

As her work evolved, she transitioned to also painting on canvas out of a desire to leave a permanent mark. Indie mixes graffiti, graphic design, photography and other media together when creating her paintings. She often features strong women such as Frida Kahlo and Ruth Bader Ginsburg.

“I think that happened, me doing that, subconsciously,” Indie says. “I grew up in a single-mom household. So, to me, women, I paint a lot of icons, because I feel like they just resonate more with me, and I love each individual story, and what it took for them to persevere. And I kind of saw that in my mom.”

But despite her evolution toward smaller-scale works, Indie says that she always finds herself “returning to the essence of graffiti.” That’s clearly evident in her dynamic and playful lettering and colors.

The large-scale projects such as this mural, though, are important to Indie. Her murals can be found across the world in locations as diverse as the South Bronx and Paris.

“It’s like the heart and soul, if you will, of my practice,” she says, “because that’s how I started. I started painting in the street. The fact that I am getting paid to do that now is amazing, and I get to collaborate with all these great clients and companies.”

The date that Indie 184’s mural will be open to the public is TBD. But St. Louisans can purchase a limited-edition print by the artist at Procure by The Women’s Creative (3730 Foundry Way Unit 137, shopprocure.com).