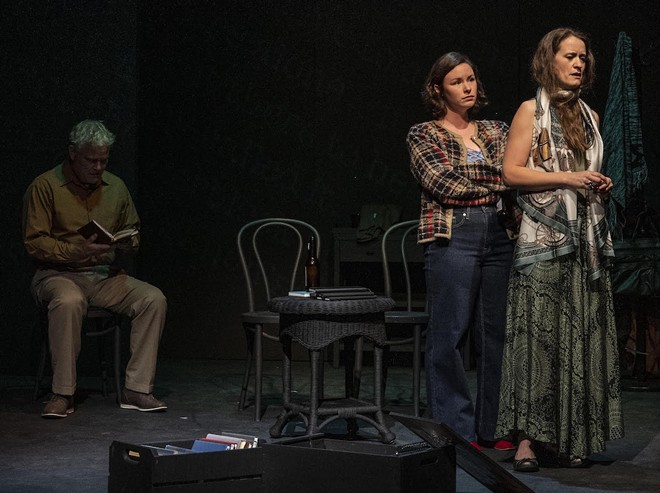 Plays about love and death generally require reflection, and Steven Dietz’s weighty Fiction, now at St. Louis Actors’ Studio, is no exception to the rule. Solid performances and clear-sighted direction by Wayne Salomon ensure a production that’s compelling to watch, though the story, much like the nearly all black non-descript set, left me somewhat cold.

After first meeting by chance at a café in Paris, Linda and Michael Waterman have been married for 20 years. Both are writers, though he’s more commercially successful. She, after a less well-received sophomore effort, has become a creative writing professor. The two recently learned that Linda has a brain tumor, diagnosed as malignant, and leaving her with about three weeks. 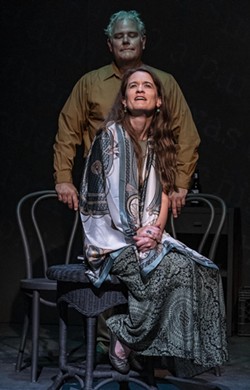 A funny, offhand comment about the purpose of diaries leads to Linda giving Michael permission to read her diaries after she passes. Which leads to Michael agreeing to let Linda read his diaries now, after mysteriously ripping out a single page. Like secrets kept under lock and key, the story tumbles out rather quickly thereafter.

The permission to read each other’s diaries feels nervy and more than a little dangerous. As a result, the sense that these memories are so distant as to barely affect the characters left me wanting more. Flashes of desire briefly fly from Michael’s fingertip to Abby’s collarbone. A flicker of betrayal and anger shines from Linda’s eyes when she turns back a few pages. I did not feel the exhilarating thrill and raw, aching pain of discovery.

As Linda and Michael, Lizi Watt and William Roth are interestingly well-matched if somewhat distant and emotionally taciturn, giving us a sense that the relationship has gone a bit stale. They can, and frequently do, disagree, with an impressive variety of hyperbole and adjectives. Yet the framing, including their opening argument over the greatest vocal performance in rock, feels somewhat performative rather than lived. Even Linda’s seeming friendship and Michael’s dalliances with Bryn McLaughlin’s Abby Drake inhabit that same grey area between personal memory and observed history.

Part memory play, part confessional, and clearly not all factual, Dietz’s play is intriguing. The story arc is interesting; it simply feels externalized. And the question of what to believe in the story unfolding in front of you, while intentional, may frustrate or disinterest some audience members. Others will undoubtedly be riveted, looking for the slightest glance or throwaway line to confirm their story choices. I found the experience less cathartic. I wanted to see more emotional connection and impact from the leads.

Though much is exposed and truths are brought to question, Dietz’s untidy play may leave you with more questions than answers. Still, the script is strong, director Solomon fills the gaps with intention, and the performances are satisfying. While not exactly a “choose your own adventure,” the purposefully open-to-interpretation nature of Fiction, continuing through October 23 at the Gaslight Theater, makes the show a compelling choice for adventurous theatergoers.