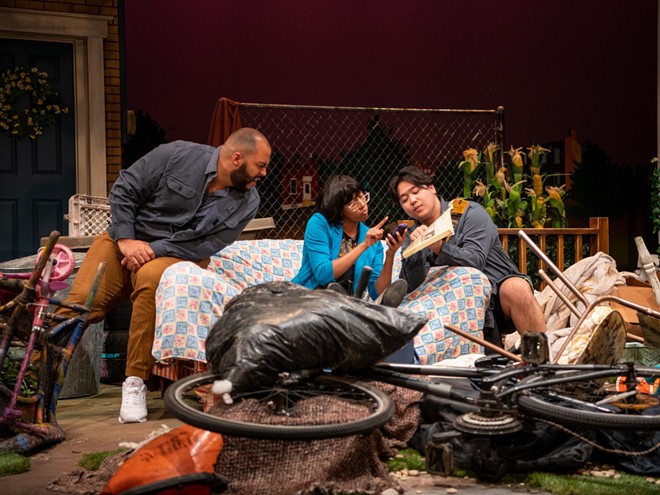 The St. Louis region is fortunate to have multiple theaters that produce shows for, and often with, younger audiences. Since the early 1970s, none have done so more regularly or consistently than Metro Theater Company, which celebrates 50 years this season. The company is among the longest running professional theater companies dedicated to art, education and developing cultural curiosity for the next generation.

Playwright Paul Fleischman’s Seedfolks, continuing at the Grandel Theater (3610 Grandel Square) through Sunday, November 6, is a tale of hope and possibility centered on the idea of meaningful urban revitalization. One of the company’s productions for all audiences, the show delivers messages about building community and restoring urban neighborhoods. This story intentionally focuses on poorer neighborhoods that frequently attract new immigrants and older residents who cannot afford to live anywhere else.

It opens with a young boy from Vietnam whose father died before he was born and who immigrated to St. Louis with his mother and sibling. He’s cleaning up a spot in a trash-filled urban lot on Delmar near his home to plant some beans in memory of his farmer father. A neighbor watching from nearby suspects he’s up to no good until she comes to see what he’s done. Though physically limited, she becomes invested in the plant’s survival and, as others join in, the garden. The young boy’s small act, which seems like it’s certain to fail, becomes the spark that slowly but steadily connects people of all races and backgrounds who live near the lot. 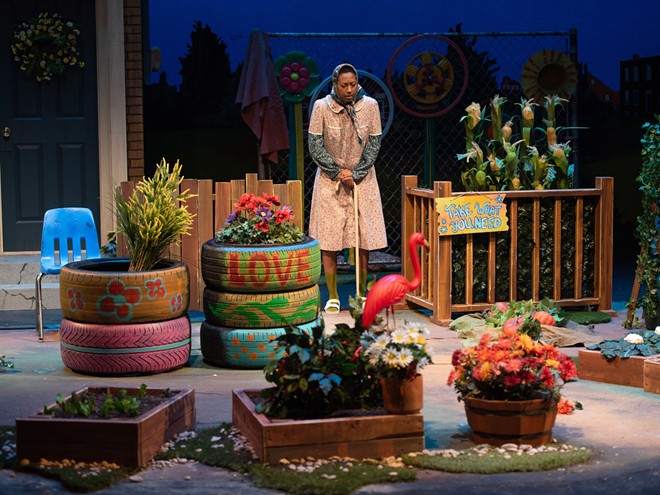 Jennifer A. Lin
Performer Tyler White, surveys the community garden in a former abandoned lot as one of the characters in Paul Fleischman’s Seedfolks.

The inspiring show features the character-creating talents of cast members Joshua Mayfield, Michael Thanh Tran and Tyler White. Each portrays a variety of genders, religions, races and nationalities by creating unique, quickly recognizable people rather than leaning into tropes or stereotypes. Dialect coach Leah Gabriel and director Jess Shoemaker show an attention to detail and intent that helps audiences of all ages follow the uplifting show. Margery and Peter Spack’s garbage- and detritus-filled set evolves into the thriving community garden with smart, purposeful changes and clever stagecraft, which is augmented by scenic artist Cristie Johnston’s vibrant work.

The show isn’t all sunshine and roses, either. One neighbor reminds another of the racial slur they hurled before they knew each other. A young Black man is treated as suspicious when he initially shows up to help. Language barriers create misunderstanding but also provide room for growth. More than simply acceptance, the common purpose and joy of the garden becomes a space of welcome in Fleischman’s well-structured script.

Of note:
To celebrate its 50th season, the company is featuring a wide range of shows, including its popular touring show, which visits local schools. Written by local playwright Mariah L. Richardson, Bold, Brave, Curious! celebrates friendship through the eyes of 9-year old best friends Delilah (Naomi Blair), Stanley (Mason Brown), and Lupe (Hailey Medrano). Though they have differences they sometimes struggle with, their “can do” spirit and willingness to accept each other, faults and all, delivers its message about friendship and acceptance with a gentle touch of magic, humor and optimism.