Review: The Rep's House of Joy Is Equal Parts Dazzling and Puzzling 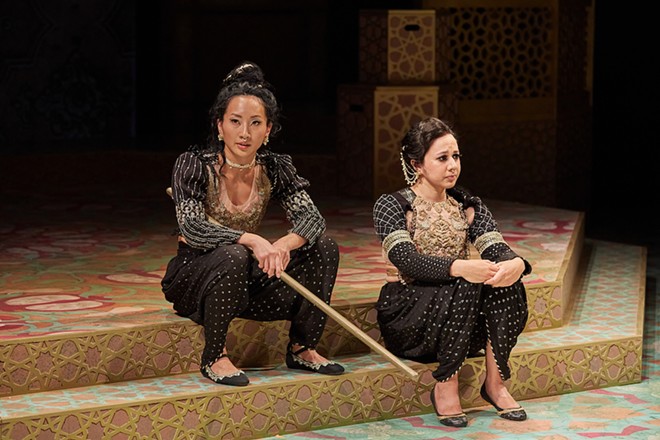 COURTESY THE REP
The friendship between Hamida (Sumi Yu) and Roshni (Tina Munoz Pandya) is a central element of House of Joy.

House of Joy, a new play at the Repertory Theatre of St. Louis by Madhuri Shekar, seems to be throwing everything at the wall to see what sticks: a ghost story, a love story, political intrigue, fantasy, bawdy jokes, fight sequences, an assassination. As you can imagine, with that many different plot points, not much sticks.

The play opens on Roshni (played by Tina Muñoz Pandya), who recently beat a man to death when he tried to hurt her sister. She’s approached by Salima (Omer Abbas Salem) about becoming a harem guard in the House of Joy, an all-female cloister where the empire’s royal women live.

Roshni agrees and discovers the magical house will let women enter but not leave and won’t let men enter at all, except the emperor. The only other person who is free to come and go as they wish is Salima, who is both boy and girl and the steward of the house. Hmm, a house you can’t leave. That seems sinister.

Then, when Roshni meets Gulal (played by Miriam A. Laube), the head of the guards, she says that Roshni can keep her name, implying that other harem guards are made to change them. Roshni also soon learns that harem guards are typically much younger than she when they begin training.

Erased identities? Kids being brainwashed? The sinister cult vibes are officially locked and loaded. But instead of this becoming an escape narrative, the play veers in a completely different direction with Roshni falling in love with the emperor’s young, new bride Mariyam (Emily Marso).

OK, I’m on board. This will show how evil this place is because this love affair is certainly going to piss off the emperor and put lives in danger. Well, not quite: While everyone does find out about the affair, the reaction is mostly a shrug.

But Roshni keeps seeing ghosts, and sometimes when she opens a door in the palace, she will be transported to a magical lake and mountains. In this fantasy world, she and Mariyam can get frisky (and they do), and surely figuring out what this world is, who these ghosts are, is going to be critical to the story? Wrong again.

In the end, the story is mainly about Noorah, the emperor’s daughter. She is actually running the kingdom behind her father’s back. She wants to step out from her father’s shadow and plans a coup. The only hiccup is that Mariyam, the emperor’s young wife, just gave birth to a boy — who will inherit the throne.

Hmm, OK. I’m still on board, but the political intrigue is probably the least interesting thread to follow in all of this. We are inside the House of Joy, following the friendships; the fights; the games of fuck, marry, kill. So introducing a political intrigue about the wider kingdom that we’ve only been made vaguely aware of seems like a waste of all the storylines within the house itself. The emperor isn’t even a physical character in the play, and while stories about him aren’t positive, he’s hardly a menacing specter, especially when he has no reaction to his wife’s affair.

Still, the show is an interesting watch, benefiting from a beautiful set (from Dahlia Al-Habieli) — which cleverly transitions through the many scene changes with only the use of video display and a few well-placed props — and beautiful costumes (from Oona Natesan).

Plus, in developing relationships — between friends, between master and servant, between lovers — is where Shekar really shines. Salima clearly thinks they know better than Noorah, whose emotions often get the best of her, but as a servant to the princess, Salima has to navigate when to hold their tongue. Mariyam, an ingenue, has to figure out what she wants and how to assert herself in an increasingly unstable home. While Roshni, a little more street-wise, has to figure out if she can get what she wants (Mariyam) and keep what she has (her job and her life). But the central relationship of the play is Roshni’s friendship with Hamida (Sumi Yu), which begins with a joyful, playful chemistry, but becomes strained and distant as Roshni spends more time with Mariyam and Hamida gets pulled into Noorah’s political intrigue.

So it makes sense that the play ends with Hamida facing a terrible choice between kingdom and friendship as the House of Joy crumbles around her.

House of Joy was written by Madhuri Shekar and directed by Lavina Jadhwani. It is showing at the Repertory Theatre of St. Louis (Loretto-Hilton Center for the Performing Arts, 130 Edgar Road, Webster Groves; 314-968-4925, repstl.org) through Sunday, September 18. Showtimes vary. Tickets are $23 to $92.