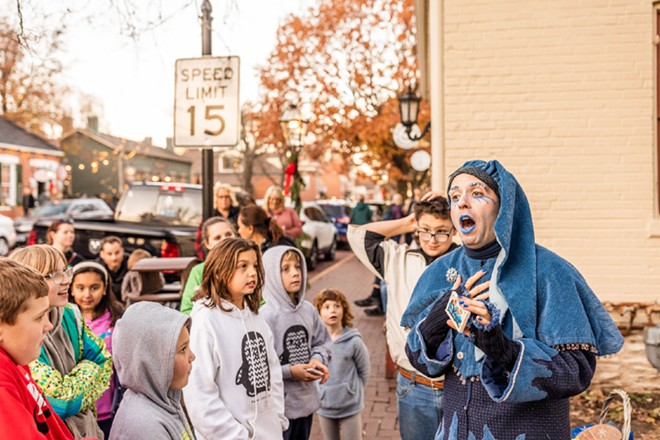 It’s like stepping straight into a Hallmark movie, circa the 1850s. A horse-drawn carriage brushes past, clippety-clop, clippety-clop. The smell of roasted chestnuts fills the air. The cobblestone is hard under your feet, and shops made entirely of brick are all you can see for miles. Women walk by in bonnets, and men in top hats.

The scene is from St. Charles' Historic Main Street, and the only thing that gives away that it’s actually the 21st century are the Christmas lights hung in trees and people snapping pictures from their phones. Efforts from the St. Charles Convention and Visitors Bureau staff have morphed the street for the holiday season, and Christmas Traditions is born once more.

We talked to Ryan Cooper, the director of Christmas Traditions, for RFT Asks. He's been involved with the program since 2006, making this year his 17th consecutive season. We dug into the characters — Cooper plays Jack Frost — what goes into putting on the season-long event, and more.

What is your favorite part about Christmas Traditions?

History-wise, we have a couple characters from the different eras of Christmas — they can share about how the holidays have remained the same or remain different over the years. But then we also have some little historic exhibits. So we have one exhibit by the Sugar Plum Fairy, and it's all about the origin of classic Christmas and holiday foods. So you can learn about how fruitcake really came about and the origins of the candy cane.

And then in the historic train depot where Santa is, we have an exhibit that's all about the evolution of the Christmas tree. So how they started very simply and they were a very churchy type thing, and then you get to how lights were added to it, and how decor trends changed over the decades. So that's how we kind of deal with history.

For the international aspect of it, we have our global gift givers from around the world and they kind of share a little bit about how Christmas is different in Europe and in Japan. We also have storytellers to tell the story of Hanukkah and Kwanzaa, just so that people can get a little taste of how different holidays are celebrated [in] different places. 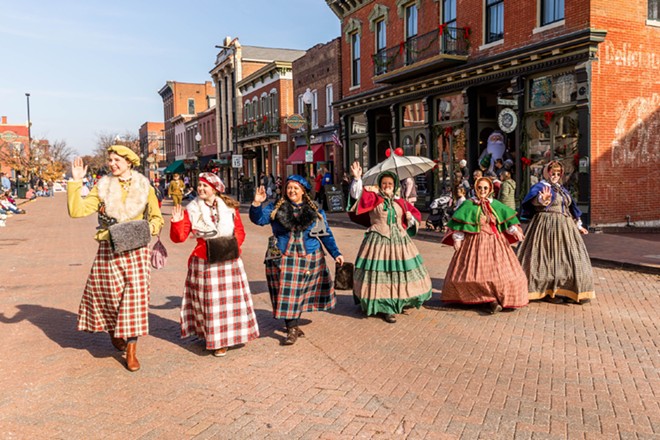 What goes into organizing an event like this? When do you guys start, and how much labor do you think it is?

So the first thing we do is in late January, the production staff of the festival will get together and have what we call a post-mortem meeting. So we'll talk about things that really went well in the season and things that we want to see in the future and little changes we want to make. So that starts in January. The big heavy lifting comes in March, so that's when we set what characters we're looking for and what our aesthetic for the year is going to be. Auditions are held at the end of May.

And then from there, it's getting everything out of storage, getting costumes all repaired, getting new costumes made, painting set pieces — and then opening day comes real quick.

What's your favorite memory you have from Christmas Traditions?

I think my favorite memory from a personal aspect was seeing so many families who really make this their tradition and you get to know them over the years. And you see them connect with the characters really well. It's hard to pick a favorite one. 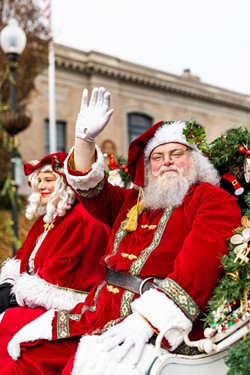 Photos courtesy of the Greater Saint Charles Convention & Visitors Bureau
Santa Claus waving to the crowd.
But for instance, we had just this past weekend something that was a favorite of mine. We have a deaf girl who has been coming for years and years and years, and she's nonverbal. And her mother left a little post on our Facebook page and said [the daughter is] getting older now, so she's starting to realize that she's different more than she had been before. So that kind of makes her a little sad and lonely sometimes. And she went to see Santa. And she's been using more and more sign language. And she said, “Merry Christmas” to Santa. And Santa signed back to her “Merry Christmas to you, Santa loves you”. And her mother said she just melted and got so excited.

So, that's just one of like a million different things like that. But it's the little moments from the guests where you see an impact being made with them as they interact with the characters and create memories with them. That makes us all remember why we do what we do.

What would you say is your number one tip to get into the holiday spirit?

My number one tip is to just throw yourself into it.

I always like to say the Christmas Traditions is sort of like a Christmas Renaissance Festival because you come here and we create this immersive experience of the past. I always tell people we hit on all the senses — you smell the live pine greenery, you hear the carols in the air, you can taste the flavor of hot roasted chestnuts. So I just encourage people that this is an event that celebrates getting away from the hustle and bustle that everyone experiences in the stress during the Christmas season. And to really go out there and have fun when you see a caroling group, sing along at the top of your lungs. When you see a character dancing in the street, dance with them. You know, we have the best of the best in terms of characters, and the more you interact with them, the more memories you're going to make. 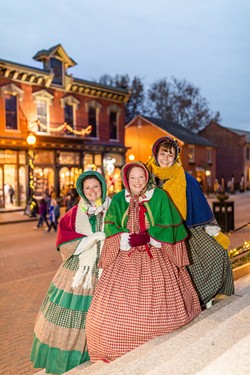 Photos courtesy of the Greater Saint Charles Convention & Visitors Bureau
Some of the characters you'll see at Historic Main Street.

How do you guys stay warm out there? Do you have a secret stash of hot chocolate, or what goes on?

We do have a hot chocolate and tea bar behind the scenes. But really, the veteran performers will tell you that it's all about layering, layering, layering. Having multiple socks, having warm shoes and having waterproof shoes is very important. Hand warmers are a godsend. But also bringing extra layers to add to your original layers once the sun goes down, and that will keep you nice and toasty.

Christmas Traditions runs until December 24 on Historic Main Street in St. Charles, from noon to 8:30 p.m. Find more information on their website.