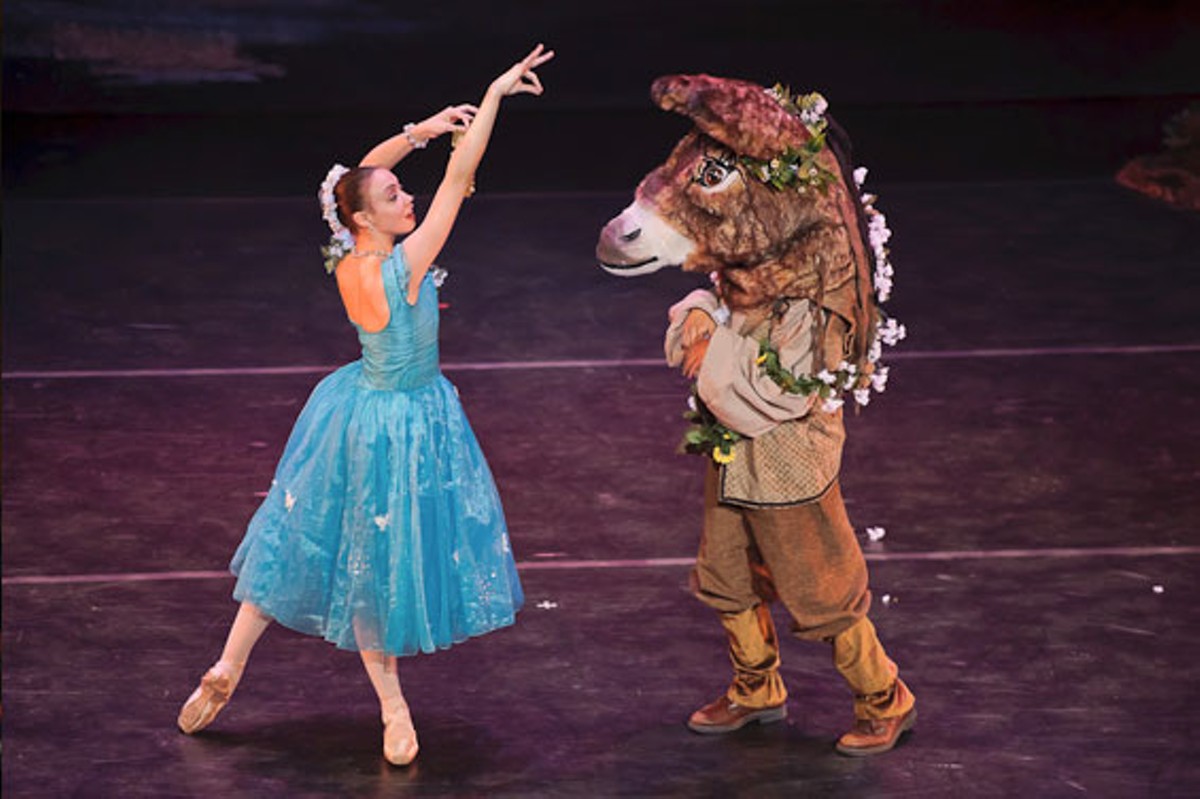 Dance Through the World

For fourteen years Dances of India has hosted, programmed and produced the St. Louis Dance Festival Showcase, featuring performances from a plethora of St. Louis companies. Though the lineup changes each year, expect bright showings from perennial participants the Slaughter Project, St. Louis Cultural Flamenco, Saint Louis Ballet and the dance program in the Performing Arts Department at Washington University, among others. With two lineups spread across two nights, the festival unfurls a menagerie of global music and dance such as Spanish flamenco, Cuban salsa and American clogging. Performances are held at 7:30 p.m. on Friday and Saturday (May 10 and 11) at Washington University's Edison Theatre (6445 Forsyth Boulevard). Call 314-534-1111 or visit www.metrotix.com to purchase tickets, and visit www.dancesofindiastlouis.org for a listing of participating companies.

Italian composer Gioachino Rossini's last opera, William Tell, opens with an instrumental that's one of his most well-known pieces of music: "The William Tell Overture." The song has appeared in media as far-flung as the climactic orgy scene in Stanley Kubrick's A Clockwork Orange to acting as the theme song of 1950s television show The Lone Ranger — just to name a few iconic pop-culture appropriations. As part of Saint Louis Ballet's spring repertory program, New Works: Contemporary Choreographer's Series, the company presents a comedic duet set to "The William Tell Overture" choreographed by Michael Uthoff of Dance St. Louis. In addition to that special performance, New Works features a mix of fresh, new dance from artist Christopher d'Amboise and the ballet's artistic director Gen Horiuchi highlighting the company's artistry and technique. New Works is performed at 8 p.m. Friday and Saturday (May 10 and 11) at the Touhill Performing Arts Center on the University of Missouri-St. Louis campus (1 University Drive at Natural Bridge Road). Tickets cost $27 to $47. For more information, call 636-537-1998 or visit www.stlouisballet.org.

Dance aficionados are already well aware that St. Louis is both home to and host of a year-round cycle of dance performances. But if your schedule is tight, or you just want to cram that year's worth of entertainment into one weekend, mark your calendar now for the Spring to Dance Festival, which returns Thursday through Saturday (May 23 to 25). The brainchild of Dance St. Louis artistic director Michael Uthoff, Spring to Dance features 30 companies converging on St. Louis for three jam-packed nights that showcase talented artists from New York to San Francisco — and all points inbetween. Each evening begins at 5:30 p.m. with a series of free performances by local dance troupes in the Terrace Lobby of the Touhill Performing Arts Center on University of Missouri-St. Louis' campus (1 University Drive at Natural Bridge Road; 314-534-6622 or www.dancestlouis.org). Mainstage performances cost $15 per evening and begin at 7:30 p.m, and feature ten different professional companies each night. More than half of this year's guests are new to the festival, which means even if you're a perennial attendee, you're going to see something new and amazing each night — whether that's a kinetic narrative courtesy of Stuart Pimsler Dance & Theater or Eddie Madril's modern approach to Native American hoop dancing (Saturday).

Filled with thwarted lovers, identity crises, magic, dreams and the most mischievous fairy in all of Elizabethan theater, A Midsummer Night's Dream remains one of William Shakespeare's most popular works. The play unfolds three interconnected stories that include amateur actors and various mismatched lovers, all linked by the upcoming marriage of Theseus, the Duke of Athens, and his bride Hippolyta, Queen of the Amazons. Like marionettes on strings, characters are manipulated by the meddling fairy king and queen, Oberon and Titania; sometimes with good intentions, sometimes merely for their own amusement. But lest you think life is easier for charmed fairies, they too struggle with challenges and strained relationships — unless, of course, it's all nothing more than a dream. The Missouri Ballet Theatre translates Shakespeare's classic comedy into dance with its interpretation of A Midsummer Night's Dream at 2 and 7:30 p.m. Saturday, June 1, at Washington University's Edison Theatre (6445 Forsyth Boulevard). For more information, call 314-226-1965 or visit www.missouriballettheatre.org.

Despite popular perceptions, the St. Louis-Chicago relationship isn't formed along a one-way highway, with St. Louisans always leaving town to call the Windy City home — just ask Paula Young David, the artistic director of the Big Muddy Dance Company (www.thebigmuddydanceco.org). This talented dancer has performed with various companies throughout her career, including Hubbard Street Dance Chicago, and she founded a successful dance studio in Chi-town, all before eventually finding her way to St. Louis, where she's helping to bring professional jazz dance performances to stages here. With Invigorate, the Big Muddy Dance Company's summer concert at the Touhill Performing Arts Center on the University of Missouri-St. Louis campus (1 University Drive at Natural Bridge Road), expect to get a little Chicago flavor — thanks in no small part to performances of "Georgia" and "The '40s," pieces choreographed by Hubbard Street's founder, Lou Conte — mixed in with St. Louis' rich jazz history for a style that's all the company's own. Invigorate is presented at 8 p.m. Thursday through Saturday (June 20 to 22), and tickets cost $22; call 314-516-4949 or visit www.touhill.org to make a purchase.