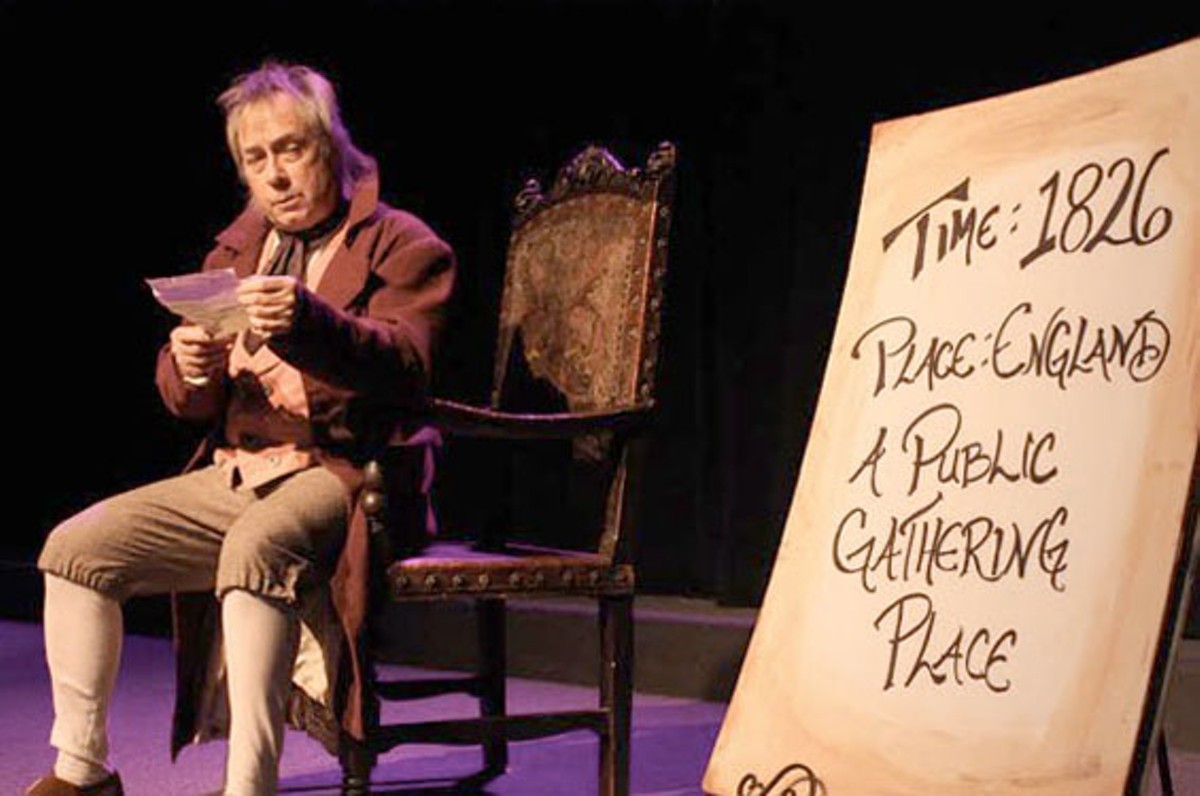 Theater is the art of embellished storytelling. An event unfolds, but to relate it properly to an audience you need costumes, lights, a stage and at least one actor to better handle the emotional moments. But what if your story is so good that it needs no such embellishments?

What he did is forge a trunkful of papers, poems and a play under the name "William Shakespeare." Why he did it is in equal measure a tale of hope and of human weakness.

Unloved by his vindictive mother (a woman scorned, and all that) and ignored by his distant in-house father, young William-Henry's only joy comes from the thrice-a-week family reading sessions, at which he and his siblings recite the great works of the English language under Mr. Ireland's direction. Shakespeare is Mr. Ireland's passion, while William-Henry loves Sir Herbert Croft's Love and Madness, a fictionalized account of the real-life forger of medieval poetry, Thomas Chatterton. It seems inevitable that the interests of father and son will become tangled in the near future, at least as William-Henry tells it.

Hanrahan creates all of these other characters through posture and voice, giving each an identifiable mannerism so that it's always clear who is speaking. As William-Henry, Hanrahan gives a dazzling performance. There's a barely concealed chuckle in his voice as he relates his misadventure, as if even he can't believe how he became the greatest literary hoaxer of his age. As the details of his crime flow forth, his eyes belie what he says to great effect. Revealing that Mr. Ireland calls him "Sam," after William-Henry's dead twin brother, he blithely claims he doesn't mind being referred to as the dead twin he never met, but his eyes dim with unspoken pain.

That his family, such as it is, spurs him to make brash pronouncements while also being the source of his discontent is the prosaic truth nestled in the heart of Solemn Mockeries. Unloved and unwanted at home, William-Henry realizes, "If I wanted good fortune, I would have to manufacture it." That he did, repeatedly and in blatant defiance of the law and common sense. But his intention was simply to please his father, who had a mania to possess something with William Shakespeare's signature on it. That this desire culminated in the full production of Vortigern, Shakepeare's "lost" play, with the finest actors of the day on London's grandest stage, is insane and patently unbelievable — and yet it all happened.

Of course, to hear William-Henry Ireland tell it, it was simply a matter of embellishment writ large. The best theater always is. 