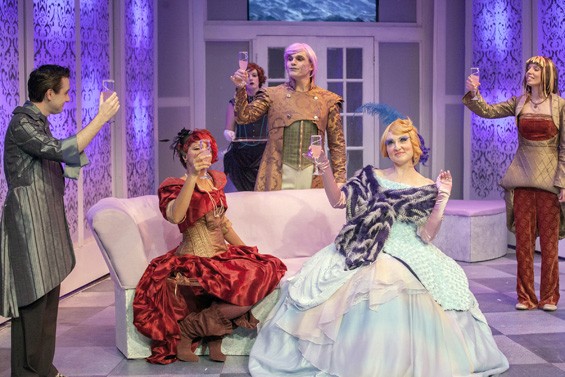 Local playwright Shualee Cook credits Oscar Wilde's witty repartee as the inspiration for her comedy of manners, An Invitation Out. Futurist William Gibson's vision of the Internet as a realm of virtual reality that humans will one day plug into also deserves some credit, as the entirety of the play occurs in digital simulacrum brought to life in this premiere by Mark Wilson's fantastic set. The Fine Arts Theatre's shallow stage is set inside a massive computer screen made of a scrim stretched across a proscenium framework. Forced perspective and Michael Sullivan's lighting design enhances the effect, and Chris Jent's sound and visual projections complete the illusion of digital reality.

Cook's future is one in which people sell their ideas or their personalities to an adoring public, and the proceeds allow them to transform the digital space they occupy into anything they fancy or can imagine. Wridget (Bob Thibaut) is a designer of custom avatars (the body worn while plugged in), who is considering getting offline for a while. This horrifies both his friend Xluci (Justin Ivan Brown in Act One and Nicole Angeli in Act Two), a foppish dandy who loves a scandal, and his Aunt Scandalicious (Alicia Revé Like), a digital diva whose avatar appears to be one-third her actual age. The pair throw around bon mots and cutting remarks with abandon as they criticize Wridget's stated desire to take a break. What does the real world have to offer that compares to their company?

Plenty, actually. Wridget's sister Buttercup (Julie Venegoni) has a new baby, and Wridget has unplugged for short trips to hold the child. This has awakened in him a desire for "something that's too big to be contained in the 'Net." His feelings are further scrambled by the presence of Raskin (Ellie Schwetye), Buttercup's guide to operating in the real world, who encourages him in his plans. Will he or won't he take a break from the Internet? As a staunch hater of the digital world and all social media, I had a hard time sympathizing with Wridget's conflict -- a constant online presence is my idea of hell. Cook's version of the future is chirpy flash and dazzle, with none of the misogyny, racism or ignorance you currently encounter in present-day comment sections. Not that it's missed, by any means, but the constant quips become exhausting, despite very good performances from the principles. This future world is nothing but surface thoughts and put-downs, and it wears you down as much as any Twitter feed.

The second act is more serious, as Wridget drills down into his failures, and Thibaut and Angeli share a very nice scene about what exactly Xluci gets out of his/her life online. It's as close as Cook comes to arguing for the Internet. Sure, it's pretty and the people are pretty and everyone has a rapier wit. But when everything is over-the-top, there is nothing holding up that top. I'm not certain that Cook intended to leave me with an overwhelming sense of emptiness, or whether that's my fault because of my admitted prejudices. The number of phones that were immediately switched on after the lights came up make me think that the hollow feeling is a personal defect.

An Invitation Out Written by Shualee Cook. Directed by Deanna Jent. Through May 3 at Fontbonne University Fine Arts Theatre, 6800 Wydown Boulevard. Tickets are $25 to $30. Call 314-719-8060 or click here.