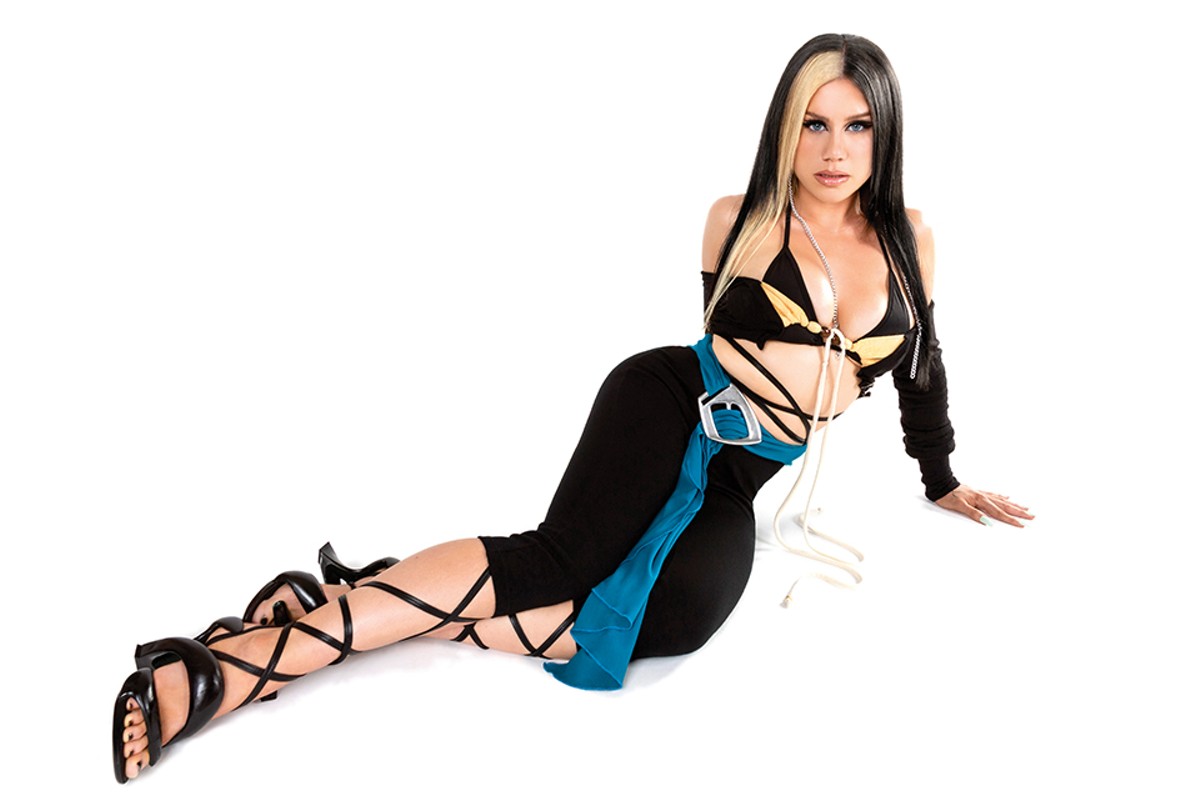 Slayyyter may be a rising star, living in Los Angeles, but she's still a Imo's-loving St. Louisan at heart. PROVIDED

Slayyyter looks downright intimidating online. The pop singer has an immense following on Twitter, which is a place that makes it hard to see where an artist's persona starts and their authentic self ends. Add in a popular new album and an international tour on the calendar, and you might guess the rising start had all but left us commoners behind.

Originally from Kirkwood, Slayyyter got her start producing music on her laptop during her sole year attending Mizzou. She was first noticed when a short clip of her track "Mine" went viral on Twitter, amassing over 200,000 views. The title track from her new album has hit over 2 million streams on Spotify. Now, living in Los Angeles, she describes her music as "Y2K-influenced dance-pop," but it's that and so much more. The songs on her new album, Troubled Paradise, are sometimes funny, but others are heartbreaking. She has a song called "Throatzilla," about, well, you can probably guess. That all feels so overwhelming and distressing. Turns out, though, Slayyyter is still a Midwesterner at heart, loves her hometown and is a joy to talk to.

RFT: I was concerned you might not want to talk about St. Louis at all.

Slayyyter: No, oh my gosh, I have way too much hometown pride for my own good, so I'm very 0x000Aexcited.

You grew up in Kirkwood. What was that like for you?

It was a very suburban upbringing. My family has lived in the same house my whole life, in a little suburb of Kirkwood. Me and my sister did the classic St. Louis Catholic school thing for grade school, and then I ended up going to Kirkwood High for high school. I feel like being from such a suburban place and not a major city made me really crave pop culture and things that kind of led me to doing music later on.

Do you have a favorite neighborhood to hang out in when you're in town?

I think downtown Kirkwood is such a cute little area, but when I turned 21 and started to drink, I started going to the Grove quite a bit with friends. I think if I would have stayed living in St. Louis, I probably would have lived in the Tower Grove area because I think all the apartments and everything is so cute over there.

Is there anywhere else in town you like going to?

I feel very nerdy to be proud of the history of St. Louis. I think the whole 1904 World's Fair thing is so cool. My grandparents took us to the Muny a lot, and I always loved the paddle boats. I spent a lot of time going to the art museum in high school. I feel like the Forest Park area is just so beautiful. People don't get it, but I feel like as soon as you get some Imo's Pizza in their mouths, they're like, "Oh, this place is pretty damn cool," you know?

I feel like I'm just naming off these businesses, but growing up around it they're so integral to my childhood. The Custard Station was a nice family spot. I have such funny memories of being a little kid, getting a swirl cone and watching the train go by. It kind of makes me feel sad even when I talk about all of it. Oh my gosh, I haven't been home in so long.

Your sound is really big, and I didn't imagine something like this would have come out of St. Louis.

Honestly, it's funny. I feel like when I started my music project, I was really shy about doing live shows. There are definitely music scenes that go on in St. Louis, but I feel like when I started my little project, I didn't know how to perform it live. I didn't have someone that could DJ it for me. I really just grew it online, and I missed out on the whole underground live music scene just because I was too shy to get into it and kept it to myself. I felt like pop music was not going to be people's thing they wanted to listen to when they're going out at night.

I was such a pop music nerd and fan. I'm very particular about the way I wanna do things. I was like, "I don't wanna do a show until I can have a balloon drop and I can do all this crazy stuff," and that's exactly what I did. I waited until there was enough interest, and I could have a crystal costume and do a full pop music show. I feel like I didn't really pay my dues in a way like every band and artists or rapper or R&B artist. You play small clubs, and then you work your way up, but I wanted to skip all that so I could have a major debut moment.

Going back to food, are there any favorites that you have to have because you can't find them anywhere else?

One of my favorite bars and food places is the Gramophone. I swear, the Red Hot Riplets mac and cheese ... I think about that so much. The food culture in St. Louis has come up, and there's so many amazing restaurants. The chefs in St. Louis really know their shit. Like, Seoul Taco is something I crave all the time. I'm obsessed with the hot salami sandwich from Gioia's Deli. I'm obsessed with Imo's Pizza and, of course, toasted ravioli. And I think Rooster is one of my favorite breakfast places.

Are there any St. Louis traditions you miss?

I feel like Midwest culture is different. The food and the family and the music and everything and hearing the cicadas chirping in summertime. There's something really special about all of it that I get super homesick for. Fourth of July is like probably one of my favorite holidays from childhood just because the Forest Park firework display was so beautiful, so, definitely will miss that.

Are you happy to have left St. Louis?

I never really had full plans to move [to LA] just because I was like, "If I can live rent-free at my mom's house and have all my friends in the same place, why would I ever go anywhere?"

I came out here in February of 2020 for a writing trip, then COVID happened, and I had no idea I would get locked here in one place. Then I ended up just moving. I was very much in the mindset of "I'll never leave St. Louis." I feel like I have so many friends who couldn't wait to get out of the small-town kind of thing, but I always [was] the opposite. I always wanted to be the biggest pop star still living in St. Louis, still doing my thing, and it feels kind of like you're a small fish in a big pond coming to LA. Everything with music is out here for sure, but nothing beats certain things about being home and going to Cardinals games with my sister and all that.

Is there anyone that you want to work with that you haven't gotten to yet?

Um, I promise I'm not just saying this because I'm talking to you today, this is something I've been telling like everyone on my team, but I want to do a Nelly collab as like a funny ... I think because I love Y2K pop culture and him being one of the biggest artists of the Y2K times and also from St. Louis, I feel like it is the most perfect collab idea. So hopefully I can make a song that will maybe spark his interest, and we will see, but that is probably my dream collab.