Slightly Askew’s Doctor Faustus Shows the Descent of a Woman 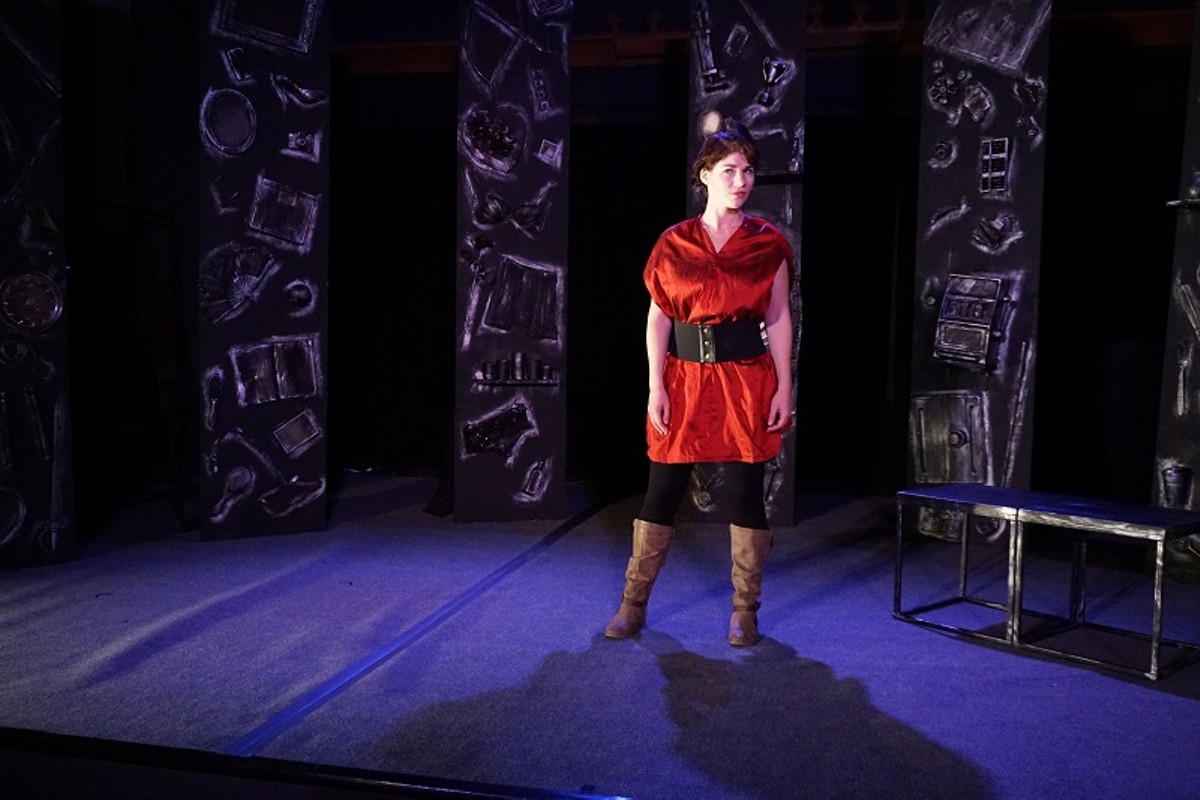 Faustus (Ashley Bauman) does it all for the ladies. JOEY RUMPELL

Doctor Faustus, or The Modern Prometheus

Written by John Wolbers and Kit Marlowe. Directed by Ellie Schwetye. Presented by Slightly Askew Theatre Ensemble through November 17 at the Chapel (6238 Alexander Drive; www.slightlyoff.org). Tickets are $15 to $20.

Would you exchange something you don't value to remake the world as a kinder, more equitable place? It seems like a better-than-even trade, but as the title character of Slightly Askew Theatre Ensemble's Doctor Faustus discovers, one doesn't remake the world without being remade in turn. Liberally adapted from Christopher Marlowe's original drama by local playwright John Wolbers, this Dr. Faustus is a woman who sells her soul to the Devil for the power to elevate all of womankind to the same first-class citizenship enjoyed by men. Driven by smart writing and quality performances from star Ashley Bauman and the cast, director Ellie Schwetye's production is a thought-provoking, engrossing play that examines modern problems through the lens of the seventeenth century's cosmology.

Faustus (Ashley Bauman) is a doctor of both medicine and philosophy who has far surpassed what's expected of women, yet is frustrated by a sense of inadequacy. She may be famous for her golden achievements, but that doesn't stop men from sexually harassing her on the street. Her relationship with women is just as fraught, as her friend Val (Lex Ronan) resents her overachieving ways. Only her beau Wagner (Michael Pierce) accepts and values her, but even he sulks when she chooses to spend time studying instead of with him.

Under pressure from all sides, Faustus agrees to join Val's coven of witches and discovers in a scene enhanced by simple but chilling practical effects that she can summon demons. Being a woman of science she dismisses the inherent value of her soul ("I trust in Faustus," she boldly declares) and strikes a quick bargain with Mephistophilis, the henchman of the Devil: She will be granted infernal powers with which she plans to smash the current social-political system, freeing women everywhere to become whatever they wish. Aided by Mephistophilis and the personification of the seven deadly sins (Nicole Angeli), Faustus plans to bring about a golden age for the ladies.

Unfortunately hell is essentially a bureaucracy and her new powers can't undo whole system in the blink of an eye — although they can be used to castrate her harassers. Faustus' world is one where people dress in seventeenth-century fashion but carry cellphones; her first act of vengeance is disseminated on YouTube. Emboldened by violence, she makes bloody-handed changes — a far cry from the bridge she'd imagined to a better, more woman-centric future.

Wolbers' script plays with the language and imagery of Marlowe's original, which sparks several interesting wrinkles in the play. Angeli's The Seven speaks like a disaffected teenager, a foodie and a tyrant, depending on which sin she represents at any given moment. It's a brilliant performance enhanced by her stark makeup, which makes her face not quite human.

Meanwhile, Mephistophilis is a shapeshifter in Marlowe's work, and so here is played by every member of the cast except Bauman and Angeli. Lex Ronan plays Mephistophilis hidden behind the face of a dead-eyed Helen of Troy to eerie effect, while Joe Hanrahan is a sullen Mephistophilis caught in the shabby clothes of a beggar. Faustus' world becomes more claustrophobic as everyone in her life proves to be a disguised servant of hell. These hollow faces cajole her into increasing brutality and carnality, soiling her once-shining humanity. Is it too much to call Mephistophilis "the internet made flesh?" Perhaps. But what else would you call it?

The great coup of Wolbers' and Marlowe's work is that Faustus recognizes everything she's lost in the bargain, and regrets it. Her soul, which she thought a lie told by religion, aches at the despair she's brought to the world. She realizes that souls encompass many elements: compassion, empathy and love — all of which she gave away.

In a play fairly littered with remarkable performances, Bauman's silent despair at this moment is eloquently manifested. The Faust story, whether Marlowe's, Wolbers' or any other retelling, is fungible enough to allow you to choose your ending. Will she escape eternity in hell? It depends on how kindly you view a woman who strives for greatness and is tripped up by human frailty.