Neil and Veronica Putz dig into the stories of some of St. Louis' oldest houses 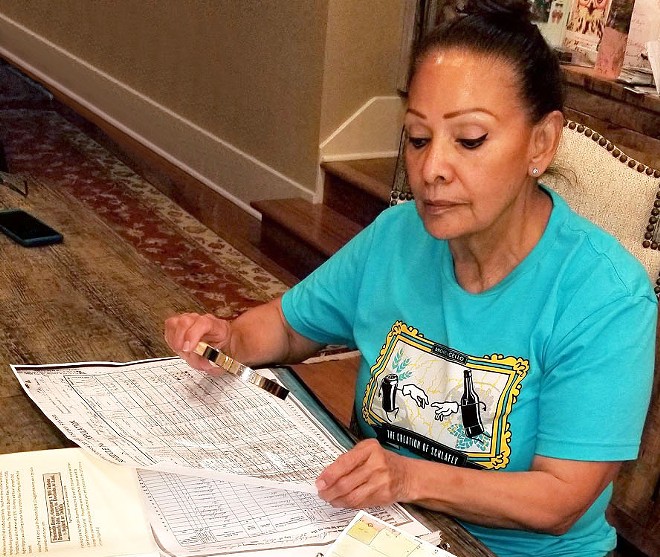 VIA NEIL AND VERONICA PUTZ
Veronica Putz looks at historical records with a magnifying glass.

On a recent Friday, Neil Putz took the day off from work.

But he didn’t spend it relaxing at his century-old Soulard home. He and his wife, Veronica, went on a date to St. Louis City Hall, where they scoured the record of deeds.

It was July, nearly five months before the Soulard parlour tours begin, but the Putzes were already getting started. As members of the Soulard Restoration Group Historical Committee, they had a lot of history to dig up about their neighborhood homes.

“This is like walking out and turning over a rock,” Neil says. “You don't know what you're going to find. But it can be so exciting.”

Since 2016, Neil and Veronica have helped to lead, and discover hidden histories, for the Soulard Restoration Group parlour tours.

But the Putzes put a different spin on these tours. They don’t see them as open house events.

They see them as history tours.

They do months of research to uncover the lives of the homes. They’ve turned up houses that once held a dancehall and a bowling alley. They’ve learned about people who immigrated through Ellis Island from Bavaria and eventually made their way to St. Louis. They’ve found the neighborhood “lamplighter,” who woke up every morning before dawn and lit the street gas candles. They share stories about Marie-Thérèse Bourgeois Chouteau, who played a role in the founding of St. Louis, and “Little Charlie,” as they call him, who died in World War I gas attack.

“There are indicators all around us,” Neil says. “When we start to investigate those things, all of a sudden it fits together.” VIA NEIL AND VERONICA PUTZ
Neil and Veronica Putz take a break from the parlor tours one year to snap a photo. Neil, whose family is from Austria, says likes to dress up in Austrian-German clothes for the tours.

Veronica and Neil first started researching houses in 2015, when they were asked to show their home on the tour.

They agreed, but they weren’t sure how to prepare.

“We didn't know what to say or what to do,” Veronica says. “Are they just coming through? Walking in and leaving? What is it?”

So they decided to learn the history of their home. They weren’t professional historians by any means. Neil spent 26 years in the military and Veronica was a director of sales in the hospitality industry.

But they spiraled down the rabbit hole of historical research. They looked at census records and visited the Missouri Historical Society. They learned that people had lived in their house since 1865 and at one point, 27 people and seven separate families lived in their home.

They did 42 tours in two days, bringing over 1,000 people into their home. And as the Putzes told the story of their home and the people who lived there, visitors wouldn’t leave. They stayed, listened and asked questions. The Putzes slowed down the entire tour with their history, they joke.

Shortly afterward, the Soulard Restoration Group asked them to unearth the history of every home on these yearly tours.

Since then, the Putzes have turned themselves into Soulard historians. Each year, they research the seven houses and one commercial property on the tour, which takes place in early December. They then write a synopsis of the history and collect historical documents for homeowners to share with visitors.

At this point, they've developed a whole science. They start by running through property records at city hall, where they’ll find the first owners and any structural changes. They’ll secure fire insurance maps and census records from the 1800s. They find yearbook photos of former residents. In the end, they’ll have a full portrait of the home –– who lived there, where they worked, what changes they made to the house, who came after them and what it all says about the neighborhood.

Their work has led them to start a historical committee within the Soulard Restoration Group. They hope to teach other residents in Soulard how to research their homes.

“How could you ever be pleased with brand new construction out in the county somewhere?” Neil says. “Yes, you might have a nice home and a swimming pool in the back and all that. But how can you be happy with that, when you've lived in a home that has such a deep history?”

Neil and Veronica don’t get paid. This is just how they spend their free time — their vacation days, evenings and weekends — squinting at census records, huddled in the city hall records, trying to unearth the secrets of Soulard homes. They spend so much doing research that the workers at the Missouri Historical Society know them personally.

“We walk in, and they say, ‘Oh, here's the Soulard people,’” Neil says. “They know us because they're always kicking us out at closing time because we’re there researching our little hearts out.”