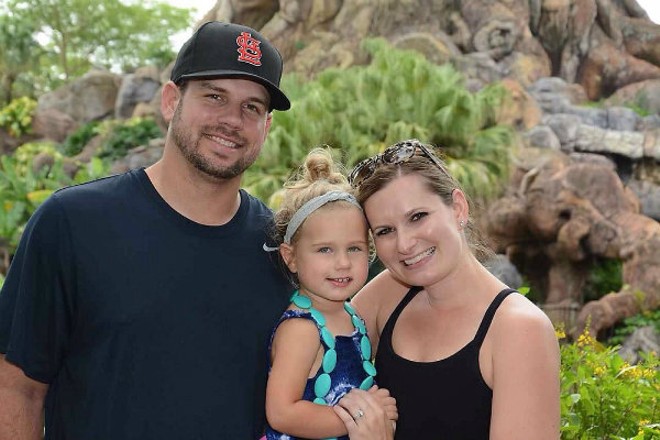 Photo courtesy of Kyle Jones.
Kyle, Piper and Emily Jones at Disney's Animal Kingdom.
When Kyle and Emily Jones learned in 2015 that their daughter Piper, now three and a half, had a genetic mutation called STXBP1 that affects one in 29.6 million people, their lives changed completely. Suddenly they were facing not only doctors, therapists and long phone calls with insurance companies, but also trying to seize the day for Piper — which led to two trips to Disney World last year alone.

"Our doctor was like, 'This is probably the good times. Enjoy life,'" says Kyle Jones of his daughter's diagnosis, which can lead to intellectual delays, tremors, seizures and even the inability to walk or talk. The symptoms vary across a spectrum and can begin or worsen over time. Only about 250 cases are currently known worldwide.
Now the Ballwin couple is raising money so families affected by the extremely rare disorder can have that Disney experience — and feel a little less alone — with an STXBP1 Meet and Greet in Orlando, Florida.

"We went once in May to try it out and she had a blast, so we decided to go back in September for her birthday, and on the last trip we realized that we didn’t have to worry about the doctor visits, we didn’t have to worry about calling the insurance and arguing with them. We just had a week to enjoy. She was happy as can be," Jones says. Other families facing STXBP1, he realized, could use that time away, too. 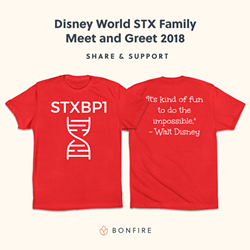 Photo courtesy of Bonfire / Kyle Jones.
The Joneses are selling t-shirts for a limited time to raise money for the STXBP1 Meet and Greet at Disney World.
GoFundMe campaign for a STXBP1 Family Meet and Greet at a conference center adjacent to Disney Coronado Springs Resort, complete with breakfast, two Disney characters, a pool party and a Disney photographer to capture all the action. Thanks to a “Parents of Kids with STXBP1” Facebook page, the guest list has grown to sixty families from all around the world, including Canada, Europe and even Australia. The event is slated for May 2018.

Jones wants to make sure that the meet and greet comes with no extra cost to the families coming.

"A lot of the kids are in wheelchairs, so people are raising money to convert their vans, or my daughter needs an iPad to talk, so people raise money for that. So there's always medical expenses that people need," he says. "Everybody is doing their best to save up for the trip, so I was trying to make sure we can cover the cost so it's not an added expense."

To date, they've raised $5,939 through shirt sales, which will continue for another week. The GoFundMe campaign, which will last for another six months, has raised $2,495 of its $10,000 goal.

The Joneses are looking forward to bringing STXBP1 families together. On the fundraiser pages, Jones' wife describes the kids as often loving characters and rides, and Jones says a love of both water and music seems to be a common trait as well.

"They're just really happy kids. They're always in a good mood," he says.

He adds, "The future is not really known, so we're just trying to enjoy what we have for now."

What better place to do that than the happiest place on earth?