After the pandemic dried up her freelance gigs, she pivoted to art full time 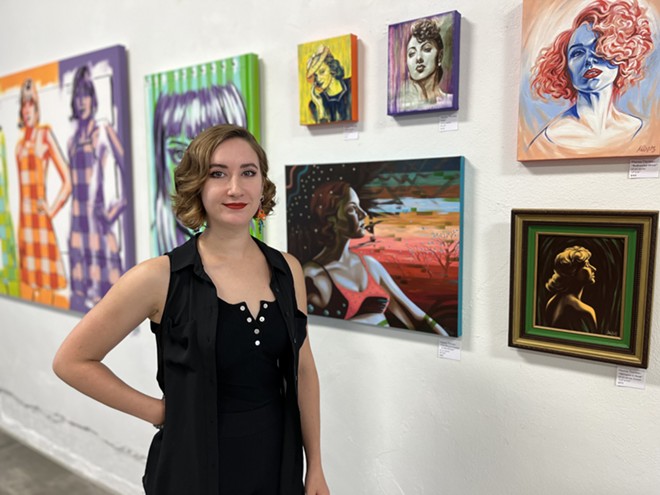 Jessica Rogen
Maxine Thirteen became a full-time artist during the pandemic and now serves as art director for 31Art Gallery.

Everything locked down during Maxine Thirteen’s 25th year — but she kept painting.

One of her first works during that time was a self-portrait on a large, 25-by-25 inch canvas. Instead of filling the space with one continuous painting, she broke it into small, three-dimensional painted cubes that evoke pixels. Each box holds part of a face and is separated from its neighbor by a swath of negative space.

That painting, “25,” became a series dubbed “Inside the Box,” a collection of minimalist portraits that used this technique. The unorthodox project came as a response to the unpredictability of the times and served as Thirteen’s method of coping with the many unknowns brought on by the COVID-19 pandemic.

“Everything was just turned on its head. I had no idea what the future was going to be,” she says. “I started focusing on random experiments in my work … [it built] into a larger series, which I then was just kind of using as an outlet during the pandemic as a way of processing various thoughts and reflections over that amount of time and kind of compartmentalizing them.”

The pandemic brought intense uncertainty into Thirteen’s life. Her freelance gigs — film production and welding — dried up, and gallery spaces closed doors, leading her to question if there’d be a way to show her work in the future.
click to enlarge 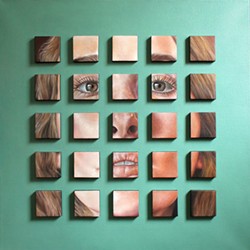 
But COVID-19 also proved to be a locus of positive change for Thirteen. She pivoted to working as an artist full-time and connected with 31Art Gallery, where she first showed work, became a resident artist and now serves as art director.

“It wasn’t my intention to become a full-time artist,” Thirteen says, noting she’d had the opportunity to pick those gigs back up as cases waned. “I think I'm just going to stick with the art … if I scale it back now, I'm going to regret doing that.”

Despite never thinking she’d take to art full-time, Thirteen has always been artistic. Growing up in the Bridgeton suburb of St. Louis, she’d find herself creating art, mostly drawing, as a child and then as a teenager.

In 2018, she began to teach herself how to use oil paints, and credits being homeschooled for helping her pick up the new skill. She turned to YouTube and Instagram tutorials as well as books and fine art.

She’d always been drawn to portraiture and, as she switched to painting, developed a distinctive style: vintage, sometimes “creepy vintage.” She draws inspiration from old movies and advertisements from the ’30s and ’40s as well as from Medieval and Renaissance portraits.
click to enlarge 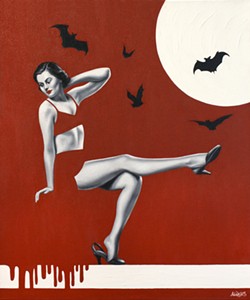 
“Certain faces are really interesting, and it's fun to kind of study them through recreating them, kind of like putting together a puzzle,” Thirteen says.

Thirteen tries to paint at least five days a week. She’ll alternate between five to 10 pieces to keep things fresh. If she doesn’t feel like painting, though, there’s plenty of other work to do: answering emails, managing her social media and “those other odd jobs” that one has to do as a self-employed artist.

When inspiration strikes Thirteen, she’ll dive full force into a painting. Which is also what happened with 31Art Gallery.

In March 2019, Thirteen stepped foot into the gallery for its first opening.

“The space is gorgeous,” she says. “It's this massive, awesome art gallery space, and the work in it is amazing. And I remember saying to my husband at the time, like quietly, I'm like, ‘If this place ever does a call for art, I want to have my stuff in here.’”

Later that year she met the owners, Jared and Amy Minnick, and became part of the gallery’s first Punk Rock Art Show that October. Like Thirteen, Jared Minnick is a self-taught painter who became “consumed by art.” He and his wife own a surveying company, and they’d decided they wanted to open a gallery, purchasing a building on Hampton Avenue so they could run both enterprises together.

“One of the hardest things was inviting artists into the gallery because the building really became like our baby, our family,” Minnick says. “I wanted people that were similar to me that really have a passion with it, and the art really means something to them. … You can tell [Thirteen] really cares about her art; she really wants to get better and better, and it really means something to her. It's more than just about making money or painting stuff — it's the art.”
click to enlarge 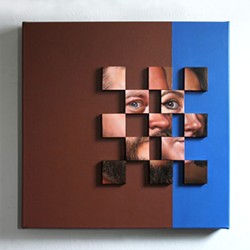 
Adding her as a resident artist seemed natural, and then when Minnick and Amy wanted to bring someone on to help out in the gallery, they asked Thirteen to serve as art director.

Now, the three of them brainstorm show ideas and think about the direction of the gallery. She also handles artist outreach as well as a plethora of different tasks as the need arises.

Thirteen says the gallery is a unique and inclusive space in St. Louis. She points to its annual Punk Rock Art Show, which features both local and nonlocal visual artists as well as bands playing “a full-on concert.” There’s a welcoming and laid-back vibe to the gallery, which is open to the public on Saturdays.

“I feel like 31Art Gallery is kind of changing the St. Louis art scene,” she says. “You walk into 31Art Gallery and there's music playing, there's a fun vibe happening, you know, somebody's going to greet you and be like, ‘Hey, do you want to drink? Like, check out the space. You have questions? What do you want to know?”