St. Louis Runner Tina Muir Quit at the Peak of Her Pro Career 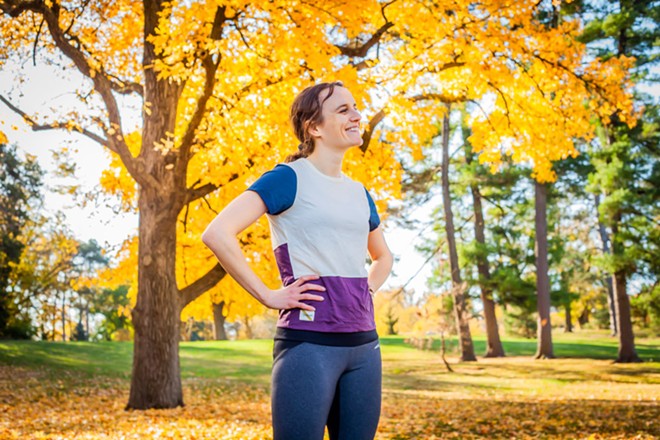 Like other runners living in St. Louis, Tina Muir has some opinions about the city.

“Forest Park speaks for itself; that’s definitely my favorite place to go,” she says. “But I do love to get out on the trails. I mean, I never would have expected such beautiful trails in a Midwestern city like St. Louis. They are just stunning.”

She points to Greensfelder and Castlewood parks, noting that life with young children often prevents her from exploring as often as she’d like. Originally from St. Albans, England, Muir and her husband relocated to St. Louis in November 2019 right before COVID-19, which has also prevented some of that exploration.

That extends to trying new places in the city, so we meet at Songbird on Chouteau Avenue after two flailing attempts to find a restaurant open on Mondays. Muir decides on Songbird’s version of French toast.

“Before, I would eat foods — kind of like what we’re eating right now,” the 33-year-old says. “I would eat these foods that were, you know, indulgent, shall we say, but it was only after I had run 10 miles that day, or a long run or whatever, when I earned them essentially.”

Feeling free to eat indulgent foods is something Muir has grown into. A former pro runner with a 2:36:39 marathon and a 1:13:21 half marathon personal records, she represented Great Britain in the 2016 Half Marathon World Championships and retired at what seemed to be the peak of her career in 2017.
click to enlarge 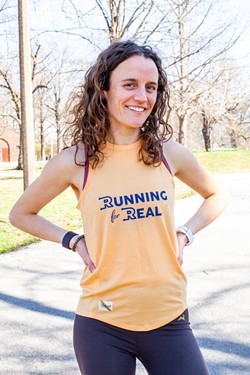 Sandy Guiterrez
Tina Muir's new “together runs" are podcast episodes made on the run that are supposed to simulate the experience of running with a friend or in a group.


Behind the scenes, Muir had been suffering from amenorrhea, the loss of menstruation, for nine years. She wanted to start a family, so she decided to do something extreme: She stopped running, totally, announcing the decision in an emotional blog post.

“I had fallen out of love with running,” Muir says.

At that moment, Muir wasn’t sure if she’d ever return to the sport. But it wasn’t the end of her running story — the same year, she launched Running for Real, a podcast that now has over 4.5 million downloads, becoming a running influencer through the process. In recent years, she’s returned to racing but with a different mindset, one that seeks balance among what she’s learned since 2017, her family and an inherent competitive drive that’s been with her throughout her whole running career.

The longer the race, the worse conditions, the more grit required, the better Muir did. On the cross-country team at Ferris State University in Michigan, Muir loved to do 17-mile training runs, regularly making a game of starting ahead of the men’s team and seeing how long she could hold them off.

“You just feel stronger and stronger,” she says of progression runs. “It’s one of my favorite feelings in the world, continuing to push that boundary, knowing that you’re pushing your limits but also still listening to the inside to know where the line is.”

Moving up in distance seemed like a natural next step, so she started training for the 2013 Philadelphia marathon. At mile 16 of the race, things fell apart.

“Towards the end, I couldn’t see straight,” Muir says. “I barely knew who I was. I was not with it at all. I think my body was just going through autopilot. And as I finished, I was almost at 90 degrees, crouched over, just because my body was totally shutting down. So that was a real humbling moment.”

Muir repeated, to a lesser degree, that crash in her next marathon. But after that she ran the London Marathon, and something about it being in her hometown allowed her to step back from some of that finish-line-focused mindset, and she had a good race.

That drive has been behind Muir’s many successes but it’s also, undeniably, been to her detriment. She recalls being in college and hearing a coach tell one of her teammates to lose weight for performance; she later asked him if she, too, should lose weight. He said yes.

“That sent me down a path,” she says. “I’ve recently, in the last few years, forgiven him for that comment because while that was harmful, it wasn’t just him. A lot of that was my own drive to be the best.”

The next year, she lost her period. Muir saw doctors who’d tell her she was healthy otherwise. But that wasn’t quite the case; Muir had insomnia and was always cold and stressed out. Ironically, it wasn’t until she had her first child that she could sleep, and she’s come to realize and talk about how she had been dealing with an eating disorder.

When Muir spoke out, she became one of the first in a string of professional runners to talk about the negative impacts of industry expectations. Her words resonated with women beyond the sport, however, and publications such as People Magazine and Glamour wrote about her.

Sharing her truth, being vulnerable and honest, she says, has always been intrinsic, and she’s used it to build connections and make friends throughout her life. It’s also the backbone of Running for Real, during which she asks guests to be as open as her. She revels in moments where she gets her interviewees to crack — like when Malcolm Gladwell took back comments on Mary Cain or when ultrarunner Dean Karnazes talked pooping behind an olive bush. But mostly, the podcast is about sharing the stories and efforts of people without big names.

It’s also about connection, something that’s perhaps best illustrated in her new “together runs,” recordings made literally while running that are supposed to simulate the experience of running with a friend. Just listening to Muir’s breath and free association as she runs in St. Louis, New York, Boston and beyond is oddly intimate, and that’s the point.

“People were feeling very lonely; we were still right in the thick of the pandemic,” she says. “What can I do to bring people in again? Everything about Running for Real is about bringing people in. How can I make people feel included?”

The Best Things To Do In St. Louis During The Week, June 23 to June 29