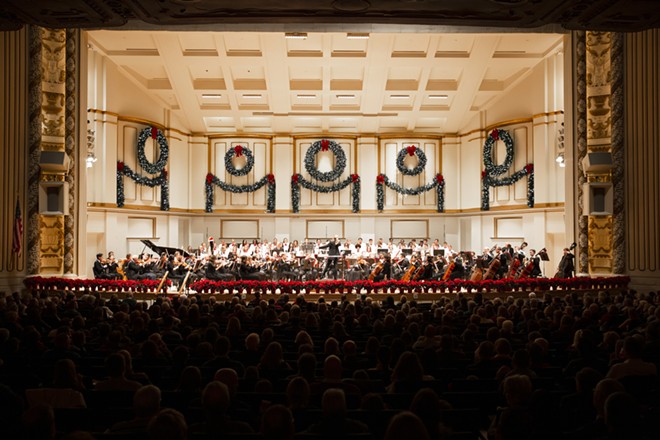 St. Louis Symphony Orchestra, or SLSO, has announced its holiday shows. These may be what will usher us into a better mood as we brace for the inevitable stress gift-giving comes with. Beginning today, tickets are on sale on SLSO's website.

A tradition for more than 25 years, the holiday concerts kick off with members of the St. Louis Symphony IN UNISON Chorus joining the SLSO for the annual Gospel Christmas concert on December 9. The IN UNISON CHORUS is a resident SLSO chorus that specializes in the performance and preservation of music of African and African American tradition. Gospel Christmas is described as “a soulful celebration of holiday spirit,” according to a press release from SLSO.

On December 11 and 12, the Muppets take the stage with Disney in Concert: The Muppet Christmas Carol while the orchestra performs the music alongside.

The Mercy Holiday Celebration concerts come next, going from December 15 to December 19. The celebration also hits the road, with the SLSO pulling a Buddy the Elf, performing loud for all to hear, for two performances at the J. Scheidegger Center for the Arts at Lindenwood University (2300 West Clay Street, St Charles, 636-949-4433) on December 15 and 16. SLSO will then return home for five performances on December 17 to 19 at Powell Hall (718 North Grand Boulevard, St. Louis, 314-534-1700). Powell Hall will even host Santa Claus for the performances.

Other than the main holiday shows, SLSO will also have a New Year’s Eve celebration. On January 2, 2022, there will be another Disney performance with Disney in Concert: Up. The movie Up will play as the orchestra performs the score to the movie.

Buy tickets at slso.org and view other performances available. Performance times range from the afternoon to the evening.