St. Louis Used to Have an Amazing Amusement Park in Dogtown 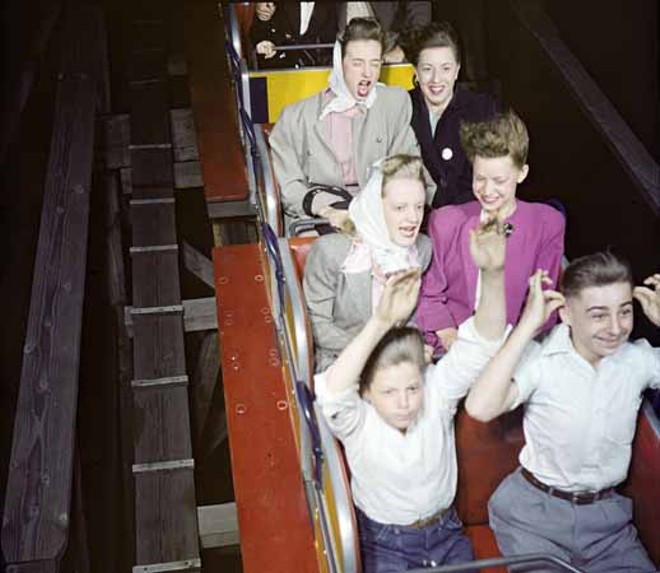 Photo courtesy of the State Historical Society of Missouri.
Forest Park Highlands visitors plunge down at hill on the Comet.
Once upon a time (OK, 1896) a theme park called Forest Park Highlands was built in Dogtown. Toting the catchy tagline, "Come on over for the time of your life," Forest Park Highlands welcomed St. Louisans of all ages to enjoy its many rides, games and events year after year. A particularly memorable ride, the 85-foot-long Comet Rollercoaster, opened to the public in May 1941 and thrilled riders with its curving break run, tunnel and dramatic dips. (Ever wonder how Comet Coffee got its name? Now you know.)

According to Doug Garner, a self-proclaimed "Forest Park Highlands addict," the fire started in the basement of a restaurant at the amusement park. Maintenance workers tried to to put out the fire in the basement below, and one even tried to chop a hole in the restaurant floor — but that led to a small explosion that only caused the flames to move faster.

Garner's website, forestparkhighlands.com, tells the story of how what started out as a restaurant fire progressively moved to the dance hall, the rocket ship ride and the Hall of Laughter. All bets were off when the fire reached the highly flammable picnic pavilion with its tar-covered roof, which made the flames speed toward the rotunda.

About 260 firefighters reported to the scene and even used water from the park's pool to put out the fire, but they lost the battle. Much of the park was destroyed — once it was quenched, only a small number of rides remained standing, one of them being the famous roller coaster. The Comet eventually was taken down during a three-day process in February 1966 and was the last part of the park to be dismantled. St. Louis Community College at Forest Park stands on the site today.

But don't worry, this little gem of St. Louis history wasn't completely lost in the ashes. Chesterfield's Faust Park is now home to the restored carousel, which you can still ride today. You can also still find the Aero Jets ride, which was sold after the fire and is now located at Knoebels amusement park in Elysburg, Pennsylvania. The same theme park also built a wooden Flying Turns ride like the one at Forest Park Highlands — you can see it in action below.

Check out these rides and more in our slideshow from the glory days of Forest Park Highlands. You can also find this and much more information on forestparkhighlands.com.