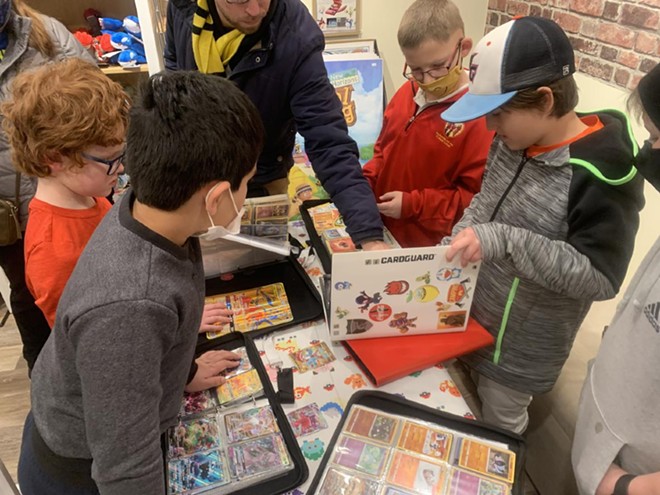 Courtesy PokeNerds
Kids at one of the trade nights PokeNerds puts on swap cards.

It was PokeNerds owner Brian Trull’s birthday when the war in Ukraine began. As he and his wife, Valeria, watched the conflict unfold, they knew they needed to do something. Valeria is from Ukraine, and after debating what to do to help, they settled on visiting Poland to deliver aid directly. The two handed out food and gave toys to children. It was just the beginning of their aid work, however, and of a piece with PokeNerds' wider aims to form community.

PokeNerds (394 Mid Rivers Mall Drive, 636-459-5093), which opened in 2019 as an e-commerce store, is on the edge of a strip mall in St. Peters. Kids are spread out through the store, debating which plush Pokémon they’ll be taking home, or which trading cards. One child is yelling out each Pokémon’s name to their sibling as they peruse the shelves, making a tough decision. Valeria and Brian are sitting behind the counter, waiting to check out the family.

The shop is popular with kids and their families, Brian explains, but they see a diverse range of ages enthusiastic about the Pokémon store. With Friday nights dedicated to trading events, the store is building a space for Pokémon lovers across the region. But they don’t stop there.

The Trulls are still fundraising for Ukraine with a jar dedicated to collecting money for a variety of organizations that help out on the ground in the country. There are pins for sale, the proceeds from which also go to Ukraine. Valeria says they’re doing everything they can to help out, and so far, they've raised thousands of dollars.

Ukrainian kids will come in and visit, eager to hang with Valeria.

“The kids think ‘They're doing stuff for Ukraine. I'm a Ukrainian kid. ' And they come by and this gives them a place where they can maybe feel connected with another Ukrainian person,” Brian explains.

The fundraising efforts have also rubbed off onto their wider community of Pokémon fans. One girl named Sophie started her own lemonade and hot dog stand, raising a whopping total of $500 for Ukraine. She came into the store to slip some of the money into the jar.

The community has found a home in the Pokémon shop, and the Trulls keep thinking of ways to continue to build on that foundation. Brian says they’re “constantly evolving,” planning to expand the shop to have a bigger space for visitors to play out Pokémon battles or host a birthday party. Another feature they want to offer is for Pokémon Go players to battle a “gym trainer,” one of their employees, on certain days and win a prize. They’re also planning a Halloween costume party and more events. The product offerings are expected to expand, as well. 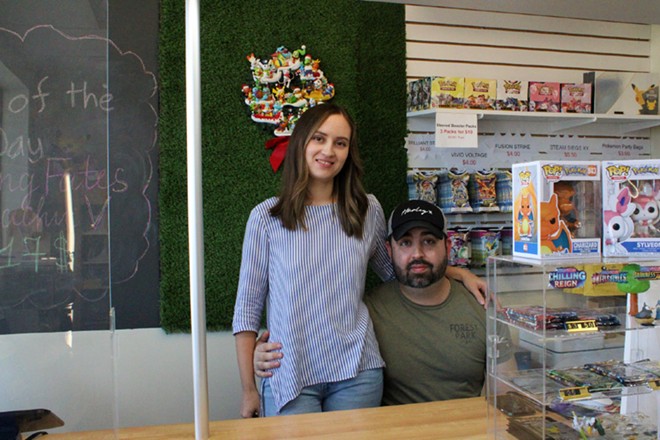 Ultimately, the Trulls want to have more locations across the country. The community they’ve built in St. Charles County is something special. They’ve been called the “Disney store of Pokémon” merchandise, Trull says. Coupled with that and the success of their e-commerce store nationwide, they have hopes they could make their destination locations work. It’s a big mission, but they want to fill the need for Pokémon fans.

“If you have a hobby, you want to go someplace where you can share a hobby and meet other people that also have that hobby and make friends, it's how you build community,” Brian says. “That's how you don't feel like you're isolated and alone. Like, ‘Oh I'm the only person who likes this thing.’ We want to open more stores and be able to provide a place of community for more people that like Pokémon.”