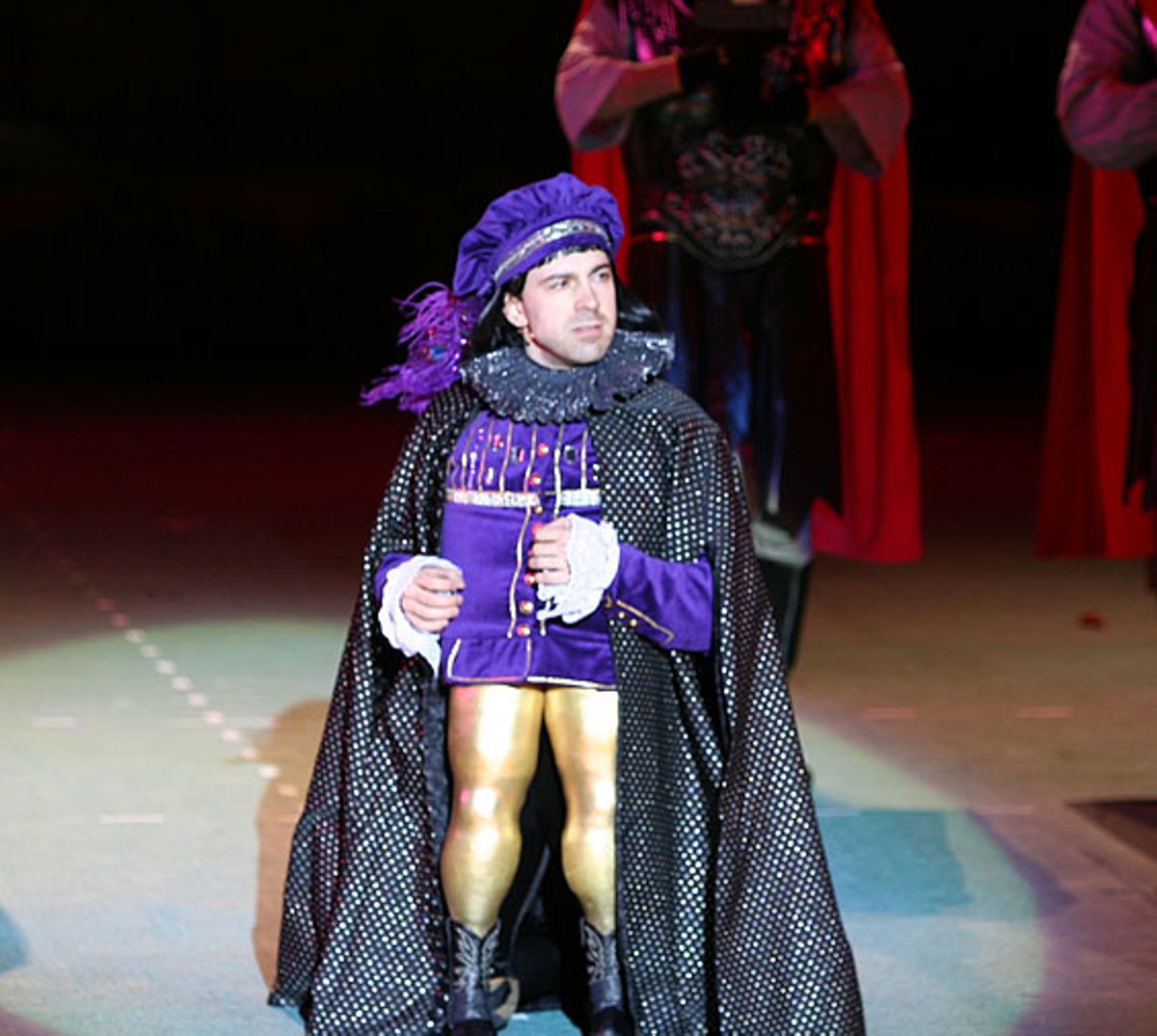 Rob McClure on stage at the Muny Larry Pry/The Muny

Rob McClure turned 31 earlier this summer, during rehearsals for Shrek at the Muny. Where did the visiting actor go to celebrate? No, not to a Central West End pub. Instead, he and the entire cast descended on the City Museum — the ideal venue for an adult who is still a kid at heart. McClure and his wife, Maggie, discovered the City Museum two summers ago when he made a charming Muny debut as Seymour in Little Shop of Horrors. Now the museum is their favorite St. Louis site.

Credit McClure's wide-eyed enthusiasm to the reassurances he received as a high school student in New Jersey. McClure aspired to be a professional golfer as a teen. But when he saw some of his pals in the school staging of Bye Bye Birdie, he got jealous.

"I was so angry that I was not in it," McClure recalls during a recent conversation at the Muny, "because it looked like so much fun." For the next three years, he acted in all his high school's musicals. The experiences turned out to be more than mere fun: "I discovered a sense of camaraderie that I wasn't finding anywhere else, not even in sports. You are choosing to come together and play make-believe. Acting exposes your vulnerabilities, and you feel silly doing it, so actors have to learn to trust each other."

McClure's career is clearly on the ascent. The actor toured with the national production of Avenue Q and later starred on Broadway as the title character in Chaplin — a role for which he received a Tony Award nomination (among other accolades) this year. Yet for all his success, McClure still appreciates the small stage, which is why he can often be found these days directing musicals at his old high school in New Jersey. It's the least he can do, he says.

"I received so much encouragement in school," McClure explains. "That level of support changed me as a person. It doesn't matter whether I'm playing Charlie Chaplin at the Barrymore Theater or performing in How to Succeed in high school, what we're striving for is exactly the same. We want to convince audiences that what's happening on the stage is real."

During his performance in Shrek last month at the Muny, McClure was tasked with convincing the audience that he was a dwarf — which for most actors would have been challenge enough. But when he wasn't strutting about the Muny stage on his knees, McClure took on double duty as the dragon's lead puppeteer. The added chore allowed him to work directly with the Muny's teenage actors. "I see myself in the teens," he says. "When you're with them, you recognize which ones are discovering a passion for theater. Theater is a tough profession, but it can be an extraordinary adventure. If I can take a student aside and say, 'You're really good at this,' if I can encourage a young person to follow his dreams, which is what my teachers did for me, I feel as if I'm fueling the future of the art form."

This week McClure is back at the Muny, eager to fly over rooftops and be bounced about like a rubber ball as Bert, the agile chimney sweep in Mary Poppins. "Maggie and I saw Mary Poppins on Broadway," he recalls. "When I completely lose myself in a show, as I did that night, she will make fun of me because my mouth will hang open. There were several moments in Mary Poppins when I found myself crying, not because of the plot, but because of the magic. Theater magic is a very real and potent thing. When those moments work, they make the hair stand up on the back of my neck. I know what I'm seeing is fake, yet Mary is flying. I know she's not really flying, but the little kid who's sitting in front of me grabbing onto his mother's arm doesn't know that."

As if embarrassed by the ardor of his reverie, McClure closes his hanging mouth, smiles a self-effacing smile and adds an understated coda: "Theater is something pretty special."