Stray Dog Theatre's Guys and Dolls Is the Musical We Need 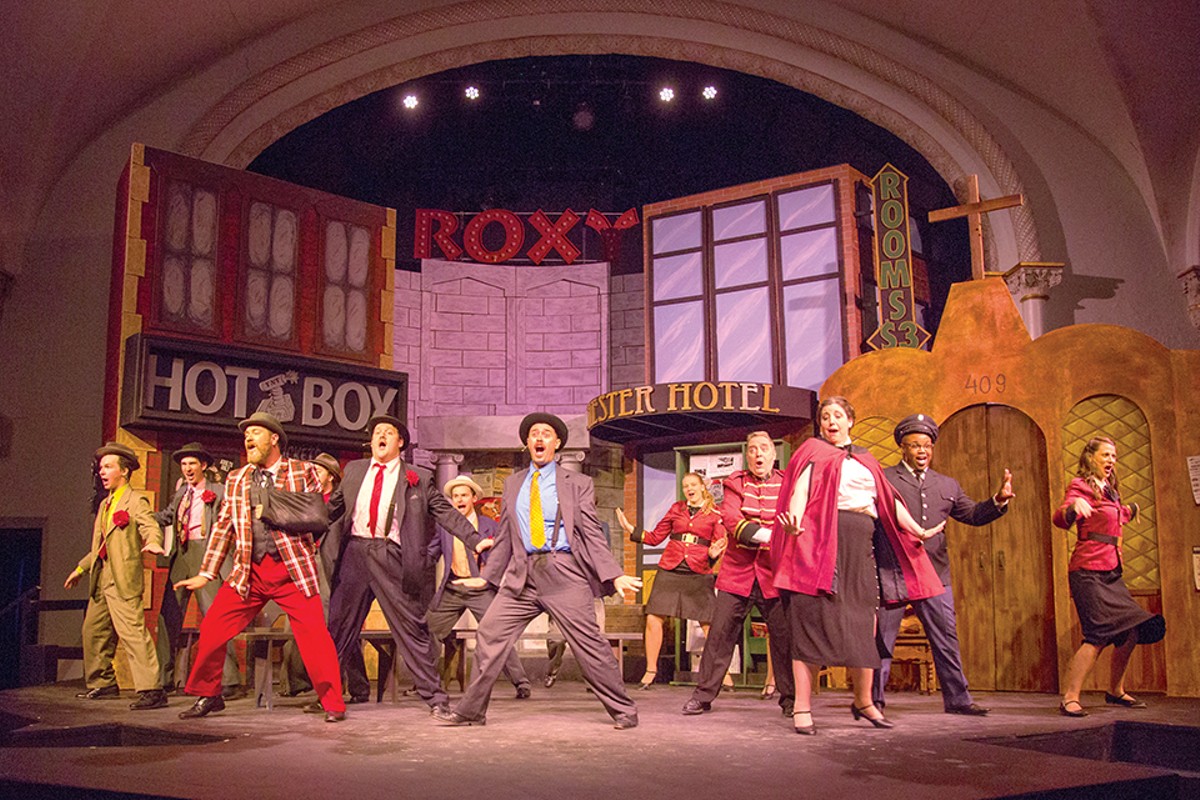 The cast of Guys and Dolls in action. JOHN LAMB

For those who have given up on reading the news, listening to your favorite music and leaving the house in favor of drinking on the couch while watching your favorite old sitcom, there are glad tidings ahead. It's time to reengage with life. The means of doing so is a 69-year-old musical about a long-gone fantasyland populated by two-bit hoods, hoochie-coochie dancers and missionaries. Guys and Dolls, never has America needed you more.

The Frank Loesser, Jo Swerling and Abe Burrows musical is a potent reminder that life doesn't wait. Stray Dog Theatre's current production of the show is lively, funny and tender. While that would normally be enough of a recommendation for any show, in director Gary F. Bell's hands, the show becomes more than the sum of its well-traveled parts. No longer is it just a fizzy good time; Bell's Guys and Dolls is a show about breaking out of ruts and betting on the future being better.

In a small corner of 1930s New York City (beautifully realized by scenic designer Josh Smith's high-climbing set), the petty gangsters gather for another night of Nathan Detroit's long-running floating craps game. Kevin O'Brien's Nathan is a big lug whose greatest gift is that he's smarter than all his underlings, but perhaps not by much. He's kept his fiancée Adelaide (Sara Rae Womack) waiting for a wedding for fourteen years, and he's lying about his craps game (she thinks it's been shut down at her request). Nathan needs a place to hold tonight's game, and in a pinch, bets inveterate gambler Sky Masterson (Jayde Mitchell) $1,000 that Sky can't take the woman of Nathan's choosing to dinner in Havana tonight. Nathan picks stern missionary Sarah Brown (Angela Bubash) as the woman, and the craps game is as good as on.

That's the bare bones of the plot, but it's the actors who make it sing. With his square frame and hint of a mustache, O'Brien makes a very Oliver Hardy-like Nathan. He huffs, and spins and lies and cajoles to great effect, creating the portrait of a very ineffectual criminal. He ain't a bad lover, though; his frequent confrontations with Adelaide typically end with him acquiescing to her. And why not? Sara Rae Womack gives her an iron spine (you can almost see it in some of her skimpier outfits), and with her hefty New York accent and naturally loud volume, she's bound to win most arguments. Whether she wins her long-delayed wedding is another story.

As for Sky and Sarah, Jayde Mitchell deploys a small arsenal of simple, direct hand gestures while speaking that hint at Sky's single-mindedness. He's a rootless gambler drifting on the wind of high-stakes games, but this bet concerning Sarah is another matter. Angela Bubash's earnest faith doesn't allow space for a shiftless man like Sky, just as his own devotion to chance forbids love with a missionary. A change of scenery could realign their laser focuses on each other, and does. Dinner in Havana is mostly drinking and dancing, which allows Bubash to romp through "If I Were a Bell."

Speaking of the songs, none of them overstay their welcome. They're all punchy, short numbers that rarely break the three-minute mark, and choreographer Mike Hodges pairs them with dances that are sharply drawn and visually lovely. Adelaide and Nathan's "Sue Me," Nicely-Nicely's (a very good Mike Wells) "Sit Down, You're Rockin' the Boat" and Sky's "Luck Be a Lady" are all worth the price of admission, but it's Adelaide and Sarah's "Marry the Man Today" that's going to stick with you long after the final curtain. Both women are done feeling sorry for themselves and sick to death of waiting for their respective boys to mature into men, and they pour all their stifled dreams and joy into a plan to get what they want. I've heard Sara Rae Womack and Angela Bubash sing many times, but there was an ebullience sparking off them during this duet that was contagious.

That's the magic of Guys and Dolls in action. At Stray Dog Theatre, this senior citizen of a show has no time for complaining, malingerers or deadbeats. You'll leave wanting to shake life by the collar until happiness and delicious Cuban cocktails rain down upon you. 0x006E