Strop in the Name of Love: Opera Theatre's Sweeney Todd thrills and kills 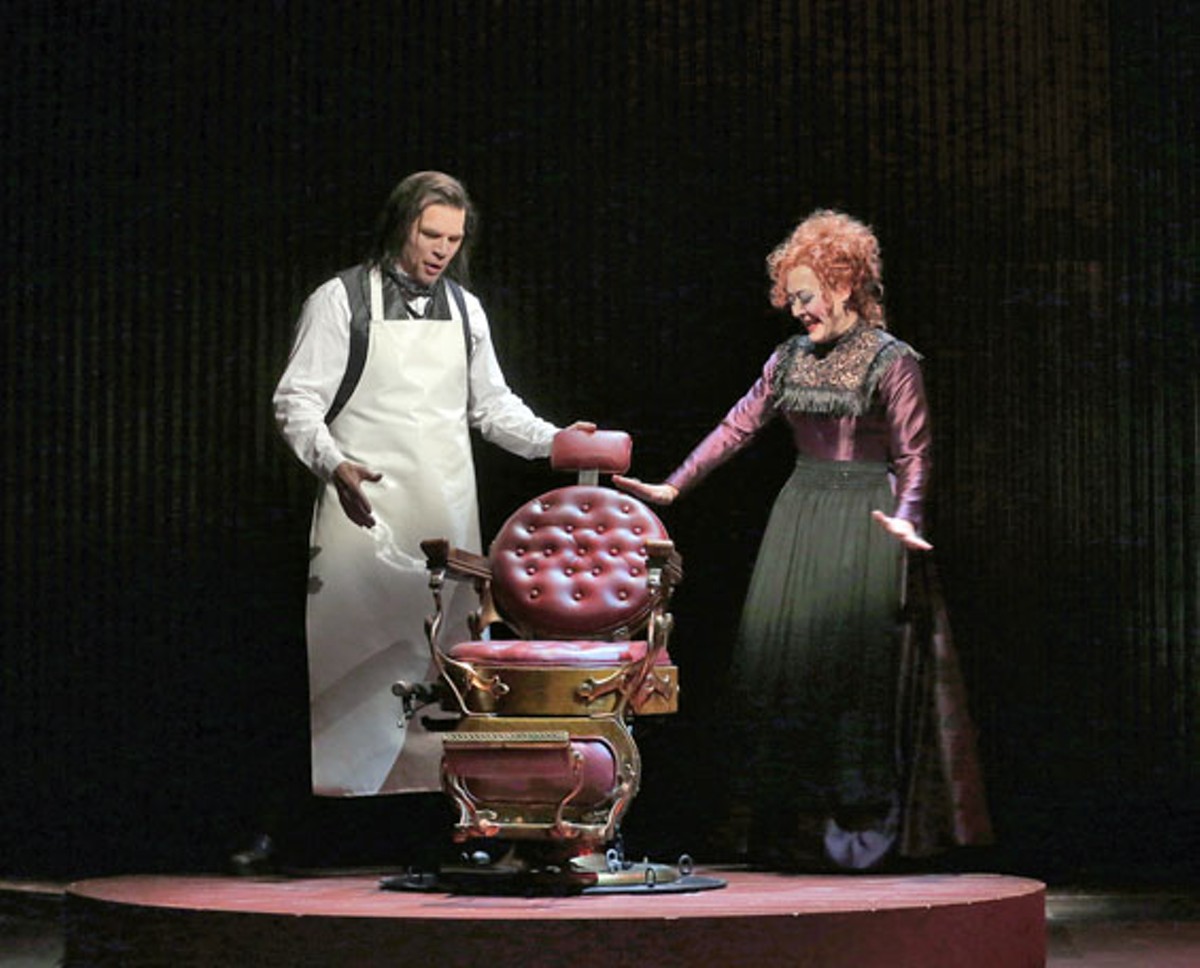 Strop in the Name of Love: Opera Theatre's Sweeney Todd thrills and kills

They are not an agreeable bunch. Almost every character in Sweeney Todd, the Demon Barber of Fleet Street, the 1979 musical thriller from Stephen Sondheim and Hugh Wheeler, is either engaged in, or drawn into, acts of deception. So how apt that in the current audacious staging at Opera Theatre of Saint Louis, director Ron Daniels begins the show on a bare stage. As the audience enters the auditorium, the quietude that hovers over the empty stage provides a deceptive calm before the proverbial storm. By evening's end so much mayhem has ensued, the stage cannot contain it all. The action spills out into the auditorium, engulfing the crowd into the fantastical bedlam that is Sweeney Todd.

It's curious that in his memoir Finishing the Hat, Sondheim should have described Sweeney Todd as "a movie for the stage." Like two other exceptional films — Orson Welles' baroque Touch of Evil and Charles Laughton's eerie parable, The Night of the Hunter — Sweeney Todd finds art in pulp fiction. Set in 19th-century London, Sweeney tells the lurid tale of a barber who was banished to Australia because an evil judge coveted his wife. Now Sweeney has returned. But when his scheme for revenge goes awry, the victim becomes the victimizer. Sweeney starts to wreak havoc on the innocent, and his prey are ground up into (apparently delicious) meat pies.

The stunning Opera Theatre staging has the feel of a show that was years in the planning. The stark, moody lighting; the blood-stained curtain; thunder that portends something ominous; wonderfully odd knee socks and colorful satin gloves that might have come straight from a harlequinade — every component works in tandem to keep the viewer (even those who know Sweeney well) surprised and enthralled. At the same time, the evening demands much of its audience. The minimalist scenic design by Riccardo Hernandez eliminates Todd's second-floor tonsorial parlor. Viewers must use their imaginations to supply what the production does not. The audience also must listen carefully. Sondheim's lyrics are so dazzling in their intricacies, at times the wall monitors tasked with printing those lyrics can barely keep up. Yet on opening night rapt viewers were impatient for songs ("The Worst Pies in London," "Green Finch and Linnet Bird") to end so that they could erupt with applause.

Sweeney's first entrance is a stunner. Looking like a refugee from Les Misérables, he cuts a mournful figure, clad from head to foot in what appears to be black leather. Rod Gilfry's commanding presence emits the brooding stillness of a samurai; his Sweeney is as close as we'll ever come to seeing Charles Bronson in a musical. Karen Ziemba has a lark cavorting through the night as Mrs. Lovett, Sweeney's amorous landlord. My guess is that her portrayal will become slightly darker at future performances. Anthony, the guileless sailor who rescues Sweeney from near-death at sea and then is drawn into his nefarious schemes, is usually sung by a tenor. Nathaniel Hackmann's appealing baritone adds a hefty timbre that I've not heard before in this role. But then, despite an abundance of gorgeous voices, not a single performer feels like an opera singer transplanted to a Broadway show (as occurred two years ago when Opera Theatre staged the Sondheim-Wheeler confection, A Little Night Music).

In both the prologue and the epilogue, we're told that "Sweeney heard music that nobody heard." He is such a cryptic figure, it's hard to know what Sweeney does and does not hear. But certainly Sondheim hears music that no one else hears. For years he was accused of writing songs without melody. But the glorious sounds that emerge from this orchestra pit, sublimely played by members of the Saint Louis Symphony Orchestra under the baton of Stephen Lord, are transporting. So too is the entire exhilarating production.