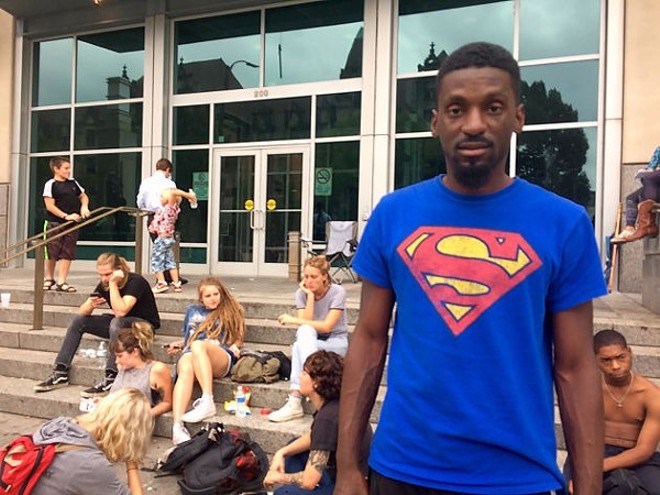 You might know Franks by one of his many superlatives: a battle rapper under the name of Ooops, a gun-violence prevention activist, a representative in the Missouri House. He’s also the subject of the recently Oscar-nominated short documentary “St. Louis Superman.”

The film follows Franks’ second attempt to pass House Concurrent Resolution 70, a bill that declared youth violence as a public health epidemic. It had already premiered at the Tribeca Film Festival when Franks resigned as a democratic legislator in the Missouri House of Representatives last May.
Franks’ resignation came as no surprise to Smriti Mundhra, who co-directed the documentary with Sami Khan.

“I was shocked but not surprised,” Mundhra says. “We knew Bruce was really struggling. We knew something had to change.”

Franks told St. Louis Public Radio he resigned to deal with anxiety and depression. He suffered severe anxiety attacks and depression after the fatal shootings of his best friend, Sylvester Hamilton, and his sixteen-year-old godson, Gerrian Green, according to the film. Hamilton and Green died within just three months of each other.

Mundrha attributes part of the film’s success to Franks' willingness to show a side of himself that was “not-so-superman.”

“We’re all in search of heroes, but it’s important to think about the sacrifices that are made by these people,” Mundhra says. “In order for Bruce to do the work that he did and be an effective leader, he had to tear open his wounds in the line of fire, literally and figuratively.”

Part of Franks’ bill proposed that June 7 be named Christopher Harris Day in honor of Franks’ older brother who was shot in 1991 at just nine-years-old while playing outside. A man used him as a human shield in a gunfight.

Mundhra and Khan talked early in the project about the importance of authenticity. They had to fight the urge to make the documentary a feel-good film about a politician passing a bill or a black man rising to political power in a white-majority legislature.

“We wanted to make something that showed the toll of what activism and politics took on Bruce, especially on his mental health,” Khan says. “The film pays witness to his struggle with mental health and is really honest about that.”

He has since relocated (he’s not sharing where at the moment) and started surrounding himself with people who “pour into him and don’t just take away.”

“It’s been amazing,” Franks says. “I’m rejuvenating and getting everything together, so life is really good.”

Mundhra said she could see Franks’ depletion from the first day of filming. On that particular day, she followed him to a protest rally, a lunch with some of his supporters, a speech at a private school in Ladue and then another one in Franklin County.

“Your story is your superpower,” Franks says. “I want people to see the importance of being your authentic self and taking everything that comes with your story, the good with the bad, and using it to push forward, save lives and empower folks.”

In the opening scene of “St. Louis Superman,” sunlight shines through the leaves of a tree on a warm day in 2018. Franks and his then four-year-old son, King Bruce Franks III, talk about his upcoming birthday on August 9.

“Something else happened on August 9 when you was born,” Franks says to his son in the film. St. Louis-based cinematographer Chris Renteria, who worked on the documentary, knew Franks before the film from his activism in Ferguson. He previously shot footage for "Whose Streets?,” a 2017 documentary about how the killing of Mike Brown by officer Darren Wilson.

Renteria was there almost every day of filming four months. He said the team wasn’t trying to tell another Ferguson story: This time, the story is really about Franks as a person.

If the 28-minute film opened his eyes to anything, Renteria says, it’s how beautiful Franks is as a person.

“He is a real St. Louis superman,” Renteria says. “The weight that he carries and the way he’s a part of the community in a way that’s unflinching — it’s mesmerizing to watch him move through a room, he’s magnetic.”

Franks’ bill passed unanimously through the Senate more than a year after he first introduced it.

Franks says so many emotions ran through him when he saw that the documentary was nominated for an Oscar. He jumped up and yelled, screamed, laughed and eventually cried.

“I’ve had a long year,” Franks says. “This is poetic justice.”

Editor's Note: This post has been updated to reflect that there are no current local showtimes for St. Louis Superman. We regret the error.