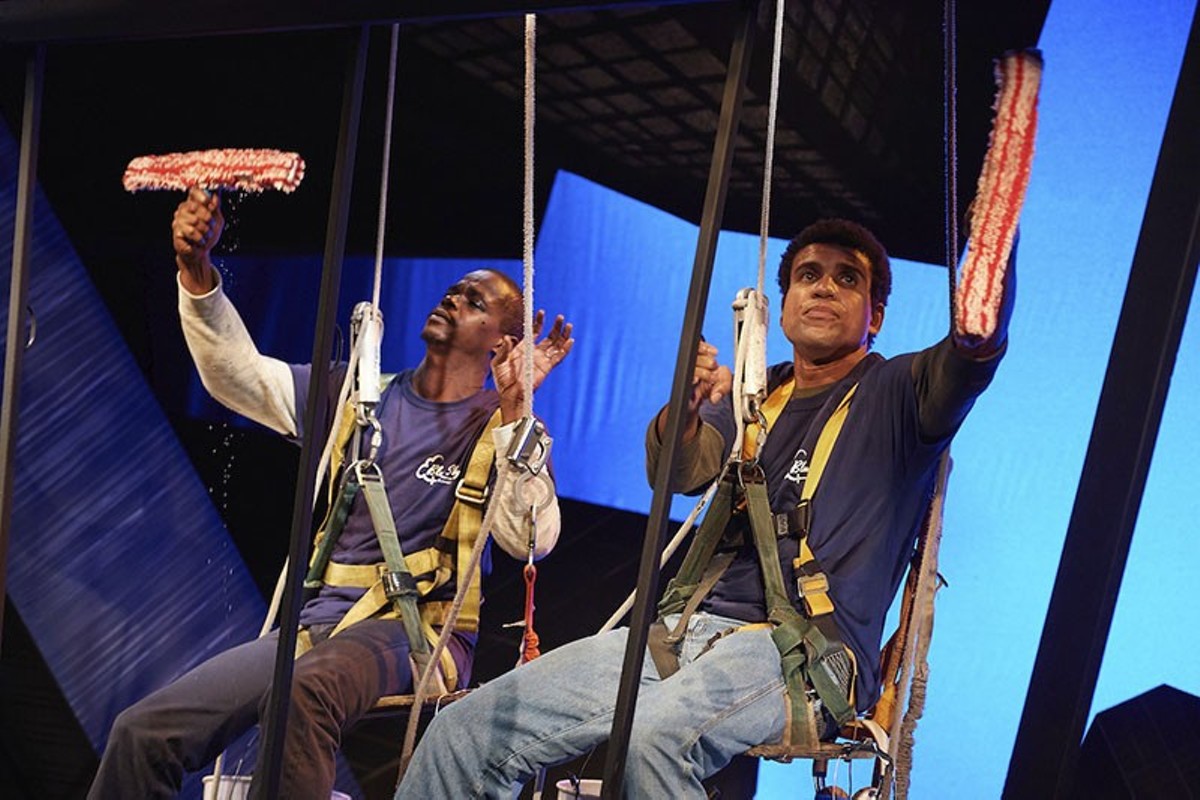 Presented by Upstream Theater through October 23 at the Kranzberg Arts Center (501 North Grand Boulevard; www.upstreamtheater.org). Tickets are $20 to $30.

There is a knife that changes hands several times in Suspended, and each appearance of the blade increases the tension. But anything other than polite conversation and stillness can't help but generate anxiety when you're dangling off the side of a building with a former friend who may have designs on killing you in order to bury his past.

Israeli playwright Maya Arad Yasur's Suspended is about the troubled reconciliation of Benjamin (Phillip C. Dixon) and Isaac (Reginald Pierre). Both men are refugees from a war-torn African nation who find themselves working together as window washers. They share a past — and just how much of a past becomes clear during the course of the play — but they may not share a future.

Arad Yasur's tense, economical script is given sharp-edged life in Upstream Theater's current production of the show, which is directed by Linda Kennedy. It's a play that requires much from its actors, not the least of which is the ability to hang from a window washer's rig for 75 slow-burning minutes. Dixon and Pierre give it their all, bringing this mystery of pregnant pauses and steadily burning anger to an expert landing. The play nevertheless cuts deeply.

Dixon's Benjamin is new in the country, only recently escaped from under the thumb of the Movement, the paramilitary organization of child soldiers and fully grown killers that terrorize his homeland. On his first day on the job, he discovers that his boss is his childhood friend, Isaac. Their joy at seeing each other is stifled by Benjamin's desire to reminisce, which is something Isaac won't do under any circumstances. He also doesn't want to talk about their uncertain status legal status: "Refugee is just my status, nothing more," Isaac cautions.

Dixon is wily as Benjamin, finding new ways to twist the conversation back to shared memories. His cheerful demeanor masks a pointed line of questioning that edges ever closer to digging out Isaac's memories.

Pierre's Isaac is entirely focsused on the future and cultural assimilation. "The secret is to make them think you can't see them," he tells Benjamin, explaining how to spend the day hanging in front of offices full of silent observers. He's also offering helpful advice about slotting into a racist society — as black men with foreign accents, they're both potential targets for all sorts of trouble.

The danger of both actors being locked into harnesses at center stage is that the play could feel static, but it doesn't. Dixon and Pierre's stillness allows you to admire scenic designer Christie Johnston's beautifully realized cityscape, which juts up behind them at crazy angles. There is also a persistent sound cue, a sort of whooshing throb that decelerates as it ends, that signals when both men are lost in their own minds.

Of course those locked-away secrets will be revealed, and the big moment comes in a jumble of murder, savagery, cruelty and callousness that is not quite unexpected. It is unstintingly horrible, and not only because of what is remembered. Hanging between the grisly past and the unknowable future in the darkness of this new world, they have only the truth as witness — those people on the other side of the glass have no idea what has transpired. It does very little to comfort either of them.