The Best Things To Do in St. Louis During the Weekend, September 16 to September 18

The weekend is all about art, natural beauty, Kill Bill, gin and more

All the best things to do this weekend seem so St. Louis. Whether you want to hit up the balloon glow, wander into the Pulitzer Art Museum, grab your kiddos and head to Oktoberfest at Grant's Farm — or check out any other fantastic events happening this weekend — it's sure to be a classic.

Don't forget to plan your week as well:

The Best Things To Do in St. Louis During the Week, September 15 to September 21: This week is all about food and art

Now in its 50th year, the Great Forest Park Balloon Race, St. Louis' yearly gravity-defying spectacle of transportational whimsy, will once again take to the skies this weekend. The festivities kick off on Friday evening with the popular Balloon Glow, for which the bulbous and basketed blow-up birds will stay grounded but lit up by their burners for your enjoyment. The night will end with a parachute team and a fireworks finale (mercifully for the parachuters, not simultaneously), with the race itself slated for the following day. There will be food and live music, family-friendly fun and plenty of opportunity for a picnic as the balloons take flight for the competition, blasting through the air at breakneck speeds approaching 10 miles per hour. Admission is free; for more information visit greatforestparkballoonrace.com.

The Cherokee Street Theater Company is giving Kill Bill Vol. 1 & 2 Live Parody at the Golden Record (2720 Cherokee Street, cherokeestreettheatercompany.com/shows/kill-bill-live-parody) a second go after having to reschedule the original run. The show is based on the Quentin Tarantino movies Kill Bill: Vol. 1 and 2 about an assassin whose former boss, the titular Bill, crashes her wedding, murders everyone and leaves her in a coma. Bill and the group of women who helped him had better watch out, because the assassin is out for revenge. The first few rows are a splash zone where brave attendees can expect to be sprayed with Tarantino-style fake gore. Kill Bill Vol. 1 & 2 Live Parody runs through Saturday, October 1. Shows start at 8 p.m. Tickets are $25 or $50 for the splash seats and include free entry to an after-party.

Barbara Chase-Riboud has had a groundbreaking career as a Black female sculptor, poet and novelist. The Pulitzer Arts Foundation (3716 Washington Boulevard, pulitzerarts.org) is celebrating her career with the retrospective exhibit Barbara Chase-Riboud Monumentale: The Bronzes. The free show will include 50 of her most striking sculptures and works on paper, such as Chase-Riboud's award-winning poetry. Also expect some nod to Chase-Riboud's controversial book Sally Hemmings: A Novel, about the slave that Thomas Jefferson fathered children with after his wife died. Jacqueline Kennedy Onassis convinced Chase-Riboud to write the book, and it was a sensation, but mainstream historians argued that it was not true and even convinced CBS not to do a miniseries based on the novel. DNA tests later confirmed that descendants of Thomas Jefferson and Sally Hemmings are still alive today. The opening reception is on Friday, September 16, from 5 to 9 p.m., and the artist herself will talk with Richard Powell, professor of art and art history at Duke University, on Saturday, September 17, at 4 p.m. The show runs through Sunday, February 5, 2023.

Back for its seventh year, South Grand Fall Fest will take over South Grand with 70 boutique local vendors selling their wares on the sidewalks outside the diverse array of restaurants that are the hallmark of the strip. The event offers the perfect pairing of a great meal and great shopping. There will be games for kids — including the perennial favorite life-size Connect Four — as well as bands performing at Ritz Park (3147 South Grand Boulevard). Get there early to catch erstwhile The Urge frontman and restaurateur Steve Ewing as the Steve Ewing Duo kicks things off at 11 a.m. The free-admission event runs until 8 p.m. 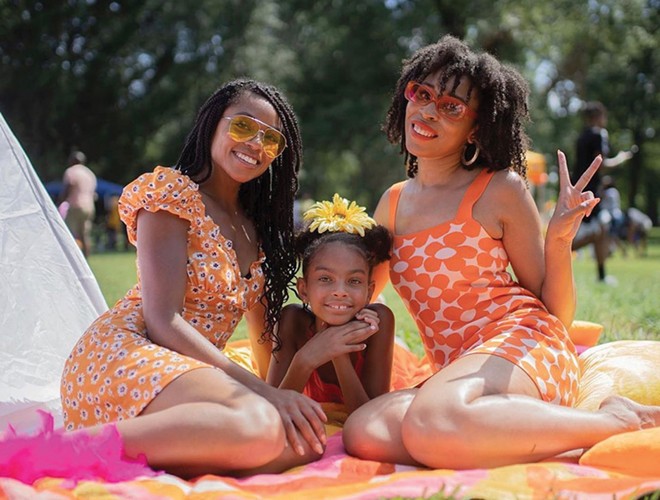 PHILLIP ELLINGTON MEDIA
Frizz Fest is an annual celebration of self love and confidence.

Leslie Hughes wanted St. Louis to have a festival that rivaled popular events in cities such as Atlanta, New Orleans, Brooklyn and Paris, according to the St. Louis American. In 2017, that led her to create Frizz Fest, an annual celebration of self love and confidence among women intended to be freeing, celebrating uniqueness and natural beauty while supporting local businesses. Although the event is primarily targeted to women of color, the event coordinators welcome "all people, of all ages, from all walks of life." Festival activities include shopping, food vendors, music, dance, yoga, natural hair demos and discussions, pony rides, face painting, arts and crafts, raffles and giveaways. Attend the fest at Tower Grove Park (4257 Northeast Drive) from noon to 6 p.m. Attendance is free. More information at frizzybynature.com.

About 17 years ago, a group of passionate music lovers came together to form the Old Webster Jazz & Blues Festival. Each year since, the festival has grown, and now attendees number more than 12,000 annually. This year's festival promises the best in music, food and beverage, shopping and entertainment such as face painting, juggling and balloons. Two stages will feature performances by the WGHS Jazz Band, Jazz Docs, Webster U Faculty Jazz Ensemble, Matt "The Rattlesnake" Lesch Band, Bach to the Future, Marquise Knox, Aubory Bugg, Blues City Swing, Walter Parks, Harvey Lockhart and the Collective, Donna Herula and The Erin Bode Group. The stages are located at either end of Glencoe, and the music starts at noon. Attendance is free.

Have you ever wanted to go to Oktoberfest but not wanted to be surrounded by drunken louts? Perhaps so you can bring your progeny along? Well, the Oktoberfest at Grant's Farm (10501 Gravois Road, 314-843-1700, grantsfarm.com/oktoberfest-2022) might be the innocent celebration that you seek. Held from Friday, September 16, to Sunday, September 18, the fest will feature music, drink, food and fun, especially since the Deutschmeister Brass Band will be performing. Tickets to the main fest are only the price of parking ($3) but there are add-ons for other activities such as a fun pass ($2 and includes a carousel ride, frozen treat and two animal feedings), Clydesdale close-up tours ($25), a VIP pass ($149) and more. The event runs from 4 to 9 p.m. 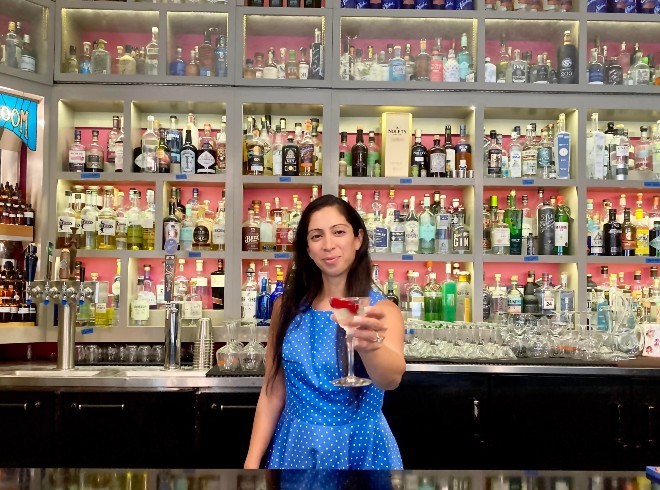 The Gin Room
Natasha Bahrami and her team are thrilled to bring back Gin Festival St. Louis after a two-year hiatus.

The last two years have been undeniably difficult across the board, but something that made them just that much more troublesome has been missing those spectacular in-person events that often weren't possible safely during the peak of the pandemic. St. Louisans can rejoice this week as one of the greats returns: Ginworld Gin Festival St. Louis. Created by Salve Osteria owner Natasha Bahrami and her Ginworld team, the event promises to be an all-day celebration and educational opportunity about gin, amaro, vermouth and zero-proof spirits. In addition to tastings, the festival will provide opportunities to meet the makers and includes an outdoor zero-proof spirits garden. Check out the fest from 12:30 to 4 p.m. at Majorette (7150 Manchester Avenue, Maplewood; 314-224-5775). Tickets are $45 and include two bar tickets and unlimited tastings.