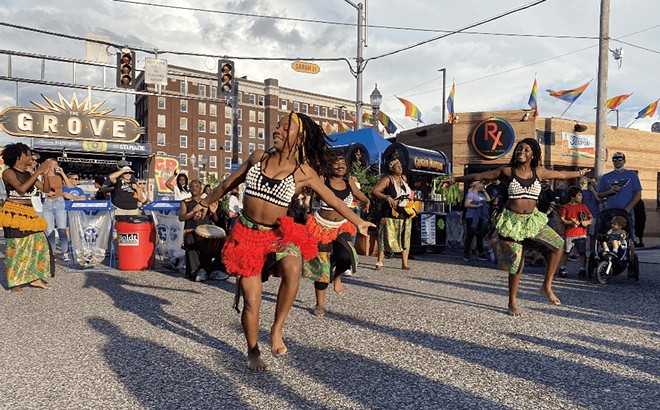 St. Louis seems to have an extraordinary number of fests, many of which take place this weekend — GroveFest, Blacktober Fest, Donut Fest — but that's probably because we do them so well. But even if you're feeling like a contemplative weekend looking at art, shopping for antiques or a decadent brunch, there's an event for you.

While you're at it, don't forget to plan your week: 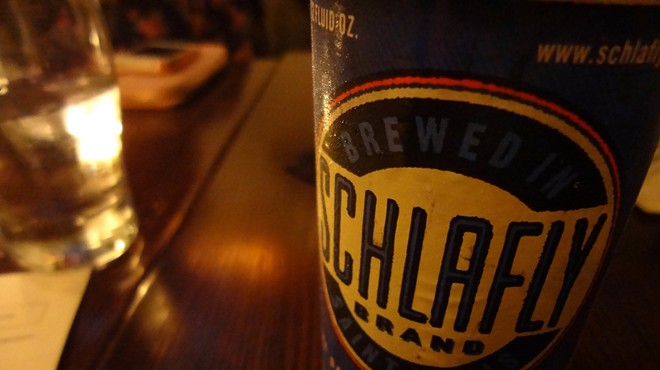 The Best Things To Do in St. Louis During the Week, September 29 to October 5: Music at the Missouri History Museum, underwater photography and group runs

Visual art connoisseurs won't want to miss the opening of St. Louis Art Museum's (1 Fine Arts Drive, 314-721-0072) exhibition Currents 122: Meleko Mokgosi. The Currents series, founded in 1978, is a "laboratory" for emerging artists to create and showcase their work. In the latest installment, Mokgosi exhibits work from his project "Spaces of Subjection," a monochromatic collection of paintings with the haunting, timeless quality of black-and-white photography. Born in Botswana, Mokgosi is known for his large-scale, figurative and text-based paintings inspired by traditions of cinema and history painting. In "Spaces of Subjection," Mokgosi draws on French philosopher Michael Foucault's writings on power and subjection as they relate to African, African American and Black life. On Friday, September 30, SLAM invites viewers to hear Mokgosi discuss his work from 6 to7 p.m. in the Farrell Auditorium. Visitors can also enjoy a celebratory cocktail with the exhibition's curators from 4 to 8 p.m. Both events are free, but cocktails are available for purchase.

The Grove's biggest party of the year returns this week, bringing plenty of food, live entertainment and general merriment to one of St. Louis' most vibrant neighborhoods for a full day of family friendly fun. Now in its 16th year, GroveFest will feature music from the likes of blues wunderkind Dylan Triplett; a performance from rapper Mvstermind featuring a slew of guest stars including Michael Franco and the Saint Boogie Brass Band; and a set of ass-shaking, eclectic sounds courtesy of DJ Sex Nintendo. In addition, there will be a drag show, a hot dog eating contest, African dancers, a bubble bus and much more. As always, the party is completely free to attend — but the memories you'll make will be priceless. The festivities kick off at 3 p.m. and run into the night. For more information, visit thegrovestl.com.

A Beer Fest with a Running Problem

For a number of years, Blacktober Fest has organized one of the largest Black craft beer festivals in the country. Now, it's coming to St. Louis with the goal of celebrating, supporting and sharing samples of beer from Black-owned establishments. The city's inaugural Blacktober Fest will kick off at Carter Commons (6746 Page Avenue, Pagedale), home to a number of Black-owned businesses. The beer drinking will take place from 2 to 10 p.m. At 5 p.m., visitors can take a break from craft beer sampling to participate in the Twilight Run, a 1k and 5k. Organized by Beyond Housing, in partnership with Black Brew Culture and Big River Running Race Management Company, St. Louis is the festival's first stop in a tour of events across the country. Throughout October, Blacktoberfest will also host events in Atlanta and Durham, North Carolina, where the event first began. In St. Louis, tickets range from $15 to $45. For more information, visit blacktoberfeststl.com.

Saturdays are for the boys, the girls and sifting through rows of antique curiosities. Join St. Louis' favorite antique store for the Green Shag Market Open Air Market (5733 Manchester Avenue, 314-646-8687) on for the store's annual outdoor market and shop from rows of local and regional vendors. In typical Green Shag fashion, expect to find any variety of antique goods. Need cat-shaped salt and pepper shakers? Letters cut from vintage books? A mid-century modern coffee table? You'll likely find all of the above and more at this annual event in the Green Shag's parking lot. And if tradition holds, you'll find live music and food truck fare there as well. Admission is free. St. Louis may not have a ritzy Fifth Avenue with blocks of classy department stores, but dammit, we sure do know how to scour and reuse the items that our grandparents, and maybe even their grandparents, have left behind.

JON GITCHOFF
Donut Fest St. Louis will include baked goods from 8 to 10 establishments.

Donuts are easy to love. Sweet. Convenient. You can eat them in your car. Sure, they aren't necessarily going to love you back, but all things in moderation, right? Well, maybe not. Donut Fest St. Louis is about chucking moderation to the wind and chowing down on some of the best donuts in town. The event includes donuts from 8 to 10 bakeries and a ticket allows you to sample them all. Samples are at least a quarter of a donut. Some are the entire donut. Entry tickets also include a beer ticket and a ballot so you can vote for best donut. There will be a donut eating contest and non-alcoholic drink samples. Let's hope one of them is coffee. Donut Fest kicks off at 1 for VIPs and 3 p.m. until 5 p.m. for general admission at Schlafly Tap Room (2100 Locust Street, 314-241-2337). Tickets are $20 to $40.

Celebrate St. Louis talent and support a good cause at Steve Ewing Presents STL Originals Festival. Steve Ewing is the proprietor of Steve's Hot Dogs and Burgers on South Grand and, unsurprisingly, the festival is next door in Ritz Park (3147 South Grand Boulevard). Ewing is also the frontman for The Urge and Master Blaster, so it makes sense he'd bring together popular local artists with food vendors to make a celebration. Bands scheduled to appear include Boomtown United, Orangetree, Midwest Avengers and Bring Me The Fires. A portion of the proceeds from the event will go to Feed the People, which has fed more than 6,000 first responders and people in need in the community since 2020. The festival runs from 4 to 10 p.m. Visit steveshotdogsstl.com/stloriginals for more information. Tickets are free.

The best Sundays are leisurely affairs: A late morning lie-in followed by a decadent (and possibly boozy) brunch with friends. One of the Grove's freshest nightlife spots, Prism STL (4510 Manchester Avenue, 314-256-1898), sees that Sunday and raises it higher with its weekly Makeup and Mimosas event. The drag brunch not only features a fabulous performance from some of the areas' fantastic drag queens but also includes a lip-smacking brunch catered by a local eatery all for $20, which is downright reasonable for brunch. You can add on $15 bottomless mimosas or $5 Bloody Mary's or a variety of other boozy options at the cash bar. Doors open at 11 a.m. and the show kicks off at half past noon.

Have an event you’d like considered for our calendar? Email [email protected] riverfronttimes.com.