Maxi Glamour is always worth seeing. VIA THE ARTIST
click to enlarge 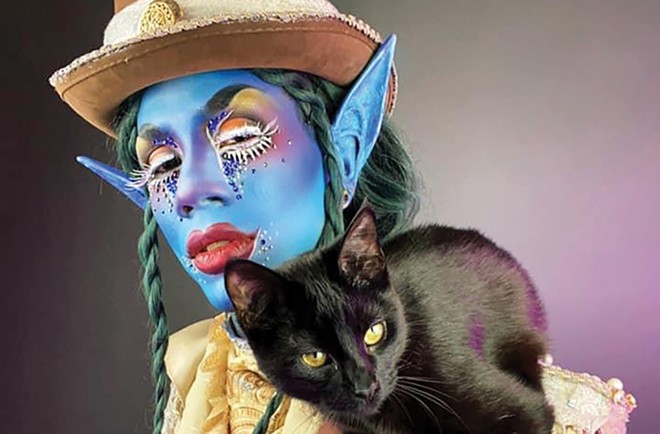 VIA THE ARTIST
Maxi Glamour is always worth seeing.
Heading out? Here's our picks for what to do, hear and see.

The Way Out Club's Last Hurrah

We have some good news and we have some bad news. The bad news is that the Way Out Club is still closing. But the good news is that they've extended their farewell festival. Instead of hosting one final week of shows, the club will now be hosting an entire month of shows as a goodbye to the beloved St. Louis institution. The shows will run each night from July 1 through 31. Owner Bob Putnam reached out to us himself to let us know about the change in plans. He said once word got out that the club would be closing after 27 years he was contacted by many entertainers who wanted to play the farewell party. So many great entertainers, in fact, that "it would be silly not to extend the party." So that's what they did, giving everyone a few more days to raise a glass to one of St. Louis' weirdest bars/venues before it goes away for good.

Coming Soon: The artists on deck haven't been announced yet, but Putnam promises that the schedule is coming soon, so we'll have that information for you as soon as we can at riverfronttimes.com.

For those who can't get enough of the stunning architecture that surrounds us all over the world, the Saint Louis Art Museum's newest exhibit will be up your alley. Architectural Photography from the Collection: 1850-2000 presents a photographic look at some of the amazing work that human hands have constructed over a period of 150 years. SLAM has compiled these works almost entirely from the museum's permanent collection, along with some recently gifted works, and they are all seen here together for the first time. Observing these pieces of art side by side will give you the opportunity to understand what compelled these artists to become fascinated with the subject of their work. From the top of a skyscraper to the complex details in medieval structures, the exhibit covers structures from across the globe and through time.

Build Your Own Story: The exhibit, running through the end of the year, features works by Francis Firth, Maxime Du Camp, Julius Shulman and Bernice Abbott. An extraordinary reason for running out and seeing the exhibit is a work by Leavitt Hunt and Nathan Baker, who were the first Americans to photograph Egypt's ancient ruins.

Do you feel the need ... the need for speed? First Fridays are back at the Saint Louis Science Center, and this time they're breaking the sound barrier! July's theme is all about the science and technology of the 1986 Tom Cruise/Val Kilmer film

Top Gun. Find out how well you know your wingmen Goose, Maverick and Iceman with Top Gun trivia. Flex your STEM muscles with the building-wide Top Gun game! (No word on if a volleyball court is being erected for the evening, but we wouldn't count it out.) There will also be speakers and other activities, along with food and drink specials. The event runs during normal daytime hours of 9:30 a.m. to 5:30 p.m.

Headed to an Aircraft Carrier Near You: This year sees the 30th anniversary of Top Gun, and the release of the sequel no one asked for, Top Gun: Maverick. (Tom Cruise isn't ready to back down yet, and we guess the next Mission: Impossible script wasn't quite ready.) Catch it in theaters November 19 (or wait 45 days and watch it at home on Paramount+).

Maxi Glamour is a demon of many flavors — standout star of Netflix's "Dragula"; lithe burlesque performer; endlessly inventive wigmaker and costumier; potent political activist; and critical Black (sometimes blue) voice within a racially divided city's art scene — so you may have missed that they're also a musical artist of increasing renown with a new album release to celebrate. Modernadada is an introspective digital environment built from dreams and discord in roughly equal measure, with Maxi as our changeling guide. Combine the highs of returning to live music with the cream of the city's drag scene, and this show is pretty much guaranteed to be the wildest ride in town.

Early Birdies: The show kicks off with free vegan barbecue (and probably baklava) from 6-8 p.m. and includes sets from DJ Steezo, AHNA, DJ Sainte, DJ Saylor and poet/wildfemme Joss Barton, so plan on showing up hungry and thirsty in all the ways.