RFT FILE PHOTO
The World's Fare festival has it all going on (just like the original World's Fair).

Another weekend hoves into view and you're looking for stuff to do. The good news is that you have options. Do you want to eat and throw axes? Do see a rarely-produced Kurt Weill show, or are you the sort that's thinking of a new tattoo? Good news, you can do all of those things without leaving town.

1. Forest Park will be more than fare this weekend.
If you're a parent trying to survive these last moments of summer break and are looking for a low-cost family activity, the St. Louis World's Fare is here to save you. This celebration of history, food and local arts features dozens of bands and performing artists, numerous crafters, a kid's island with bounce houses and creative station, and, of course, food trucks galore. Urban Chestnut will have an outpost of its beloved beer garden up and running, there's an artists village, and STL Axe Throwing will let you chuck axes at targets to burn off some of that late-summer stress. The World's Fare is open from 5 to 10 p.m. Friday and 11 a.m. to 9 p.m. Saturday and Sunday (August 17 to 19) at the World's Fair Pavilion in Forest Park (www.stlworldsfare.com). Admission is free.

2. A story of murder, race and our future.
Shaun Patrick Tubbs has only been in St. Louis a few weeks, and already he's weary of hearing the same response when he talks about directing Union Avenue Opera's forthcoming production of the Kurt Weill and Maxwell Anderson musical Lost in the Stars, which is based on Cry, the Beloved Country, Alan Paton's novel of Apartheid-era South Africa. "People keep saying to me this show is 'so relevant' to St. Louis. And I keep asking them, 'Isn't that a shame?'" Tubbs says. He offers a disingenuous smile, but he means it. "This is a show that's relevant to all of America, and it is a shame. But we keep getting better. I know that because I'm here directing this piece." "This piece" is the story of a black father and son, Stephen and Absalom Kumalo, living in South Africa. Stephen is an Anglican priest, and he raised his son to be a moral person. But when Stephen goes to Johannesburg to find his son, he learns that Absalom has committed serious crimes. During a robbery, Absalom kills a white man and faces the death penalty. This shakes Stephen's faith and also brings him into close contact with the murder victim's grieving father. Tubbs is crystal-clear on what he hopes audiences take away from the show. "I want people to leave with a question in their mind; I don't want them to leave with an answer. I want people to question what they're doing in this. I don't want to lose hope for the future, but I want us to think what can we learn to give the next generation a future?" Lost in the Stars is presented by Union Avenue Opera at 8 p.m. Friday and Saturday (August 17 to 25) at the Union Avenue Christian Church (733 North Union Boulevard; www.unionavenueopera.org). Tickets are $30 to $55. 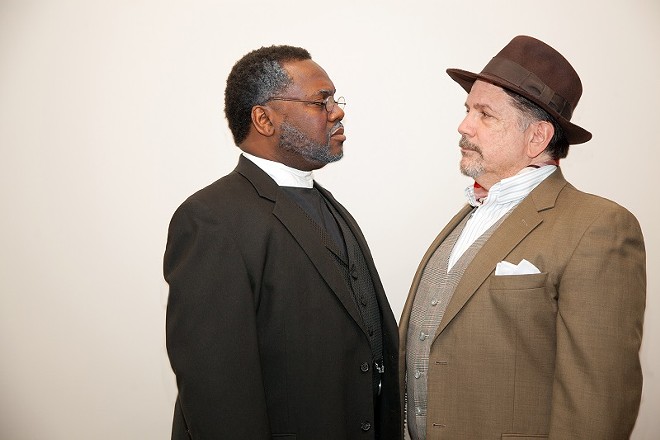 3. Batter up, guns down.
The Midnight Company is well known for presenting unusual plays filled with unusual ideas, but its contribution to the St. Lou Fringe festival may be one of its most outré endeavors. Joe Hanrahan's Now Playing Third Base for the St. Louis Cardinals ... Bond, James Bond is about theater itself, as well as baseball in St. Louis. As the title hints, James Bond is involved, but so are the Beatles, and there's a plot to kill the president. Because this all takes place in St. Louis, race is also a big part of the play. It sounds ambitious, but that's Midnight Company. Now Playing Third Base is performed at 7:30 p.m. Saturday and 4 p.m. Sunday (August 18 and 19), and 9:30 p.m. Thursday, 7:30 p.m. Friday and 6 p.m. Saturday (August 23 to 25) at the Kranzberg Black Box Theatre (501 North Grand Boulevard; www.midnightcompany.com). Tickets are $15.

4. Get flashier tattoos.
Trader Bob's Tattoo (2529 South Jefferson Avenue; www.tbobstattoos.com) celebrates the old school every year with its Tattoo Flash Revival. Flash tattoos are essentially clip art for your body: Think daggers through hearts, li'l birds, stars and winged skulls. They're generally simple to ink and feature minimal color work; they're also classics of the form. The Tattoo Flash Revival is a fundraiser for CHADS Coalition for Mental Health. The staff has dug out vintage flash sheets from Trader Bob's vaults, and from noon to 8 p.m. Friday and Saturday (August 17 and 18) they'll ink them on for $50 to $300 (as always, size matters). One hundred percent of the fee goes to CHADS. The shop is simultaneously hosting its first-ever Trader Bob's Charity Art Auction this weekend, and Piehard Pizza and Custard will be on-site.

THEO WELLING
You can get flash tattoos similar to those on this woman's right hand at Trader Bob's Tattoo Flash Revival.

5. Morrissey was right, the Queen is dead.
The current prince of Wales is heir to the throne of England, still, at age 69. If he ever does become king, what sort of monarch would he be? Playwright Mike Bartlett imagines Charles' reign in his controversial play King Charles III. Told in Shakespearean blank verse, the play imagines a Charles who isn't afraid to take a more active leadership role than his mother — or really any modern English monarch. Faced with giving his assent to a law he doesn't approve of, Charles refuses to give his permission, which just isn't done. Suddenly the figurehead king is an active participant in the governing of England, and the people are outraged. Charles has his own problems as well — the ghost of his first wife haunts him in private moments. St. Louis Shakespeare opens its new season with the tendentious King Charles III. Performances are at 8 p.m. Friday and Saturday and 2 p.m. Sunday (August 17 to 26) at the Ivory Theatre (7620 Michigan Avenue; www.stlshakespeare.org). There is an additional performance at 7:30 p.m. Thursday, August 23. Tickets are $15 to $20.

6. Bike on track.
If you think riding your bike on the streets of St. Louis is dicey, where does a NASCAR Superspeedway rank on the terror factor? Not to worry, because during the Gateway Motorsports Criterium only bicycles are on the track at Gateway Motorsports Park (700 Raceway Boulevard, Madison, Illinois; www.bigshark.com). It's a 1.6-mile, mostly flat course that uses both the NASCAR oval and the roadway portions of the track. Races start at 8 a.m. Sunday, August 19, with the juniors and wrap up with the 5 p.m. Fixed Gear Criterium.

7. It's a hump day hoe-down.
We're roaring right at the last weekend of summer, so it behooves us all to get out and enjoy it while it lasts. If you're the sort of young professional who lives for al fresco sippin' and dancin' on a mid-week evening, head over to Jammin' at the Zoo. This celebration of beer, wine, food, live music and summer takes place from 6 to 10 p.m. Wednesday, August 22, at the Saint Louis Zoo (1 Government Drive; www.stlzoo.org). The party starts with a complimentary wine and beer tasting from 6 to 8 p.m., after which you pay for your drinks. Several local food trucks and zoo restaurants will sell comestibles throughout the evening. Check out the stingrays in Caribbean Cove and then dance under the stars to the highly choreographed spectacle of entertainment sensations Dirty Muggs with Johnny Henry. The party is sponsored by the Zoo Young Professionals, and if you officially join the group before the day of the event, you'll get free admission. Otherwise, you pay $12.95 to $22.95.