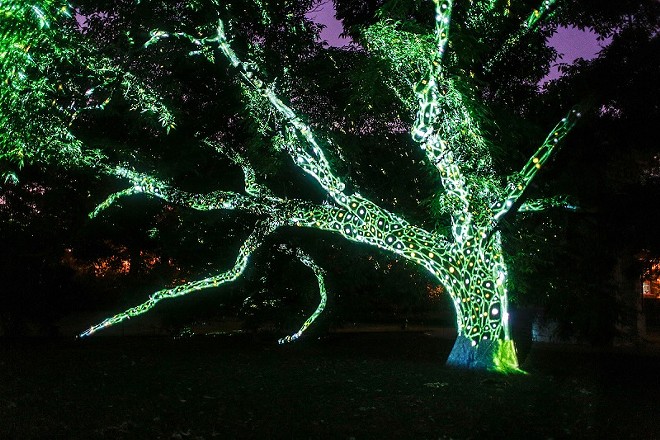 Some of you are reading this in a mostly-empty office while your colleagues are enjoying an extended July 4 holiday. The rest of us are grinding out another day, albeit with sunburns and the too-many-hotdog shakes. This list of  activities is for the working-class dogs, who earned the right to blow off some steam this weekend.

1. Experience the romantic high seas
Time has slightly blunted the edge of Gilbert and Sullivan's satiric blade, sadly. Their best operas once came with the sting of the high-and-mighty being mocked for their presumptions, but our mostly-classless society doesn't understand why the characters of H.M.S. Pinafore are so overwrought about marrying above their station. It's simple, really. Ralph is but a humble sailor aboard the aforementioned Pinafore, the pride of the British Navy. He loves his captain's daughter, Josephine, from afar, and she loves him, but in those days the children of naval officers didn't marry people from the working class. The captain has his own lower-class admirer, but despite his curiosity about the woman, he can't lower himself to admit it. All of these people sacrifice love and happiness for decorum, which makes them idiots. But what if they hadn't been born to such a lofty station? What joy they could experience — if only. Union Avenue Opera opens its season with the classic light opera about love among the emotionally repressed. Performances take place at 8 p.m. Friday and Saturday (July 6 to 14) at the Union Avenue Christian Church (733 North Union Avenue; www.unionavenueopera.org). Tickets are $32 to $55.

JOHN LAMB
A scene from "How's Bruno," one of the plays in the 2017 LaBute New Theater Festival.

2. Dive into new theater in fun-size portions
Now in its sixth year, St. Louis Actors' Studio's LaBute New Theater Festival is a win-win situation for the local theater scene. Seven new one-act plays will debut at the festival, which is win number one; win two is the fact that all seven productions will be performed, crewed, directed and costumed by local theater artists. As is tradition, namesake patron Neil LaBute always has a new work of his own in the show, which this year is entitled "4th Reich." There's a lesser-known third win hidden in here as well. The festival includes a special category for young playwrights who are still in high school, and these emerging artists get to see their work performed by professionals for an audience. This year's edition takes place at 8 p.m. Thursday through Saturday and 3 p.m. Sunday (July 6 to 29) at the Gaslight Theater (358 North Boyle Avenue; www.stlas.org). Tickets are $30 to $35.

3. The Garden lights up our lives
Summers in St. Louis are no picnic, what with the brutal heat and oppressive humidity. At night conditions improve a bit, and that's the time to get outside and experience the city. The Missouri Botanical Garden (4344 Shaw Boulevard; www.mobot.org) takes full advantage of the nocturnal respite with Flora Borealis, a nighttime-only special exhibition. Thanks to the artistic and technical brilliance of AVI Systems Inc., a section of the garden is temporarily transformed into a new experience with active lights, moving images and sounds that alter and enhance the familiar landscape. Tickets for Flora Borealis are $10 to $25 and are sold for specific time slots each night (Thursday through Tuesday through August 26). While you're waiting for your scheduled time you can take advantage of MoBOT’s new tented biergarten, which features live entertainment on select nights.

4. It's your move, peeps
When Dutch director Paul Verhoeven wanted to make a film that doubled as an analogy for the life of Jesus Christ, he chose to do so in the visual language of science fiction. Peter Weller stars as Alex Murphy, a police officer in a dystopian, near-future Detroit that is ravaged by crime. When Murphy dies, a corporation revivifies him to be the world's first cyborg police officer: RoboCop. What follows is an ultra-violent spectacle that outdoes even the Old Testament for bloodshed. The Landmark Tivoli Theatre 6350 Delmar Boulevard, University City; www.landmarktheatres.com) presents RoboCop as part of its Reel Late series of midnight movies. It's screened at 11:55 p.m. Saturday and Sunday (July 6 and 7), and tickets are $8.

5. They came, they sang, they Jerseyed
The Muny's centennial season is a sort of greatest hits celebration of musical theater, but the producers still made room for that most special of shows, a Muny premiere. In the case of Jersey Boys, it's essentially a two-fer; while the show itself is wildly popular, it still counts as a first for the Muny. It's the story of Frankie Valli and the Four Seasons, the quartet of working-class New Jersey boys who discovered that not only could they sing, they could write their own chart-topping material as well. Jersey Boys follows their meteoric rise, their brushes with heartache and mobsters alike, and friction within the band, all conveyed through more than 30 Four Seasons songs. Jersey Boys takes over the Muny in Forest Park (www.muny.org) at 8:15 p.m. Monday through Monday (July 9 to 16). Tickets are $15 to $100.

(C) 1960 THE FILMGROUP
The original Little Shop of Horrors has no singing and few laughs, but an exceedingly grisly end.

6. There's no singing, but plenty of screaming
Before Little Shop of Horrors was a beloved musical, it was a low-budget black comedy shot in two days by the legendary Roger Corman. The plot is definitely darker than that of the musical version. Seymour is a meek young assistant in Mushnick's flower shop who cross-breeds two plants and ends up with a killer hybrid. Seymour accidentally kills a few people (you know how it is), and feeds their corpses to the exotic Venus flytrap-style plant he’s named Audrey II after his crush, the beautiful shopgirl Audrey. The police start tracking all these missing people, and fortuitously end up at Mushnick's shop just as Audrey II's buds are about to open. Things really get grisly from there. The Strange Brew division of the Webster University Film Series presents this dark slice of 1960 horror at 8 p.m. Wednesday, July 11, at the Urban Chestnut Grove Brewery (4465 Manchester Avenue; www.webster.edu/film-series). Admission is $5.