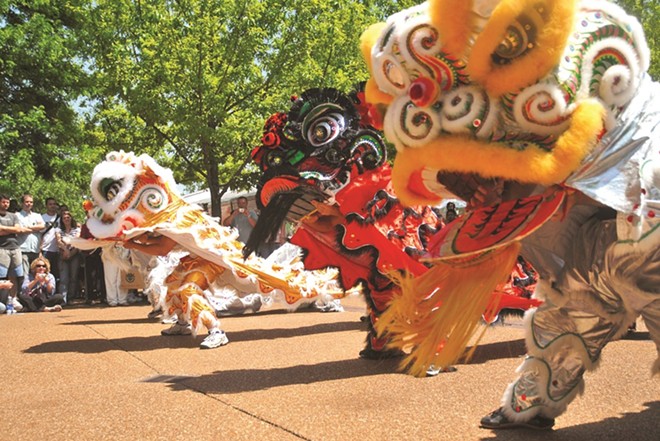 JOSH MONKEY/COURTESY OF THE MISSOURI BOTANICAL GARDEN
Chinese Culture Day is a riot of colorful activities.

Big weekend for the Blues coming up, with game two against the Stars on Saturday night. Saturday is also the best holiday of the year: Independent Bookstore Day. If you're not a big reader, well...have you considered the visual arts? It's an option, along with QFest, some Chinese culture and more.

1. The Film of Life
Leo Tolstoy's War and Peace is an all-consuming novel about the entirety of love, life, war and death, all set against the magnificent backdrop of early-nineteenth-century Russia. As Napoleon invades the country, the misogynistic Prince Andrei and his social misfit friend Pierre Bezukhov interact with their large cast of friends and rivals as everybody prepares to deal with the war. People fall in and out of love, fortunes are lost and life grows grim for many.

Sergei Bondarchuk spent six years making the four installments of his film adaptation and suffered two heart attacks during the process. He emerged with a truly monumental seven-hour film that employed thousands of actors (12,000 alone in the epic Battle of Borodino set piece), as well as valuable artifacts and props loaned by Russian museums, all of which give the film a sweep and verisimilitude worthy of the source material. The Webster Film Series presents a recently restored version of Bondarchuk's War and Peace, Part I at 7:30 p.m. Thursday, April 25, in Webster University's Moore Auditorium (470 East Lockwood Avenue; www.webster.edu/film-series). Parts II through IV will be shown on successive nights through Sunday, April 28. Tickets are $5 to $7 per film, and a $15 punch pass good for all four installments is also available.

2. Together 'til the End
Elderly twin sisters Iola and Anest have lived together on the rugged coastline of Wales all their lives. The only thing that's changed is Iola, who suffers from dementia. Her end is in sight, but can Anest live without her sister? Sooner the tide go on without the shore. When Anest's adult daughter Menna arrives to see what can be done for Iola, she finds the two sisters changed. Anger, acceptance and the old Welsh stories of the sea intertwine in Tim Price's poetic drama Salt, Root and Roe. Upstream Theater presents the American premiere of the play at 8 p.m. Thursday through Saturday and at 7 p.m. Sunday (April 26 to May 11) at the Kranzberg Arts Center (501 North Grand Boulevard; www.upstreamtheater.org). There's a final matinee at 2 p.m. Sunday, May 12. Tickets are $25 to $35. 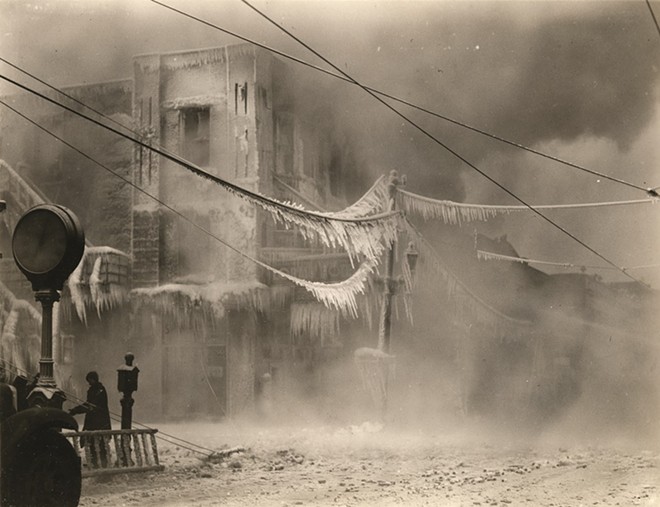 Untitled (ice scene), 1936; American; gelatin silver print; sheet: 4 × 5 1/8 inches; Saint Louis Art Museum, Gift of John R. and Teenuh M. Foster 311:2018
The Saint Louis Art Museum's Poetics of the Everyday: Amateur Photography 1890-1970 showcases the snapshots of the world.
3. Say Cheese!
Portable cameras democratized photography. Once anybody could carry a camera with them, photography became a hobby as well as an art. Poetics of the Everyday: Amateur Photography 1890-1970, the new exhibition at the Saint Louis Art Museum (1 Fine Arts Drive; www.slam.org), features 110 works by unknown moms and dads. They show children, landscapes, family gatherings and of course the family dog, with often unintentional effects such as the dreaded double exposure. Despite being made by strangers, the images of family vacations and candid shots have a familiarity that makes them universal. Poetics of the Everyday is on display in galleries 234 and 235 from Friday, April 26, to August 25. Admission is free.

4. Book It
Independent Bookstore Day takes place this year on Saturday, April 27, and the Novel Neighbor, the Book House, Left Bank Books and Subterranean Books all mark the day with special events. The Book House (7352 Manchester Road, Maplewood; www.bookhousestl.com) and Left Bank (399 North Euclid Avenue; www.left-bank.com) have official merchandise for the occasion, which this year includes literary tea towels, a James Baldwin pin and the Atlas Obscura Guide to Literary Places. Staff at Subterranean (6275 Delmar Boulevard, University City; www.subbooks.com) will dress as literary characters, while some special merchandise on offer features shop dog and de facto mascot Teddy. The Loop shop is also hosting the Great Bookstore Bake Off, in which staffers create a signature bake from a literary reference. Meanwhile, the Novel Neighbor (7905 Big Bend Boulevard, Webster Groves; www.thenovelneighbor.com) will have snacks and adult beverages for adult shoppers. All locations, suffice it to say, will be selling books, books, books. Check the websites for hours and more information, and buy more books.

5. It Takes a Steady Hand
Nanjing paper cutting is a Chinese art used to create intricate and detailed portraits of people, animals and flora. Using only scissors and monochrome paper, the artist deploys a series of folds and cuts that reduce the paper to the essence of a monkey, a chrysanthemum or a branch sprouting blossoms. Zhang Jun is a fifth-generation Nanjing master of the art form, which UNESCO placed on the Intangible Cultural Heritage List. He will demonstrate the art at this year's Chinese Culture Days Saturday and Sunday (April 27 and 28) at the Missouri Botanical Garden (4344 Shaw Boulevard; www.mobot.org). The festival also features acrobats, martial arts demonstrations, arts and crafts for the kids and food. The Grand Parade featuring a 70-foot dance dragon is at 2 p.m. both days. Chinese Culture Days takes place from 9 a.m. to 5 p.m. Saturday and Sunday, and admission is $5 to $16.

COURTESY OF CINEMA ST. LOUIS
QFest celebrates LGBTQ life and culture in films such as Brazil's Hard Paint.
6. Say His Name
Fredy Hirsch was one of many young German Jews who were just finding their place in the world when the Nazis rose to power. A keen athlete and strong believer in the benefits of physical health and education, Hirsch was a respected sports instructor in the Jewish youth club system. He was also gay, which led to some murmuring, but his charisma and personal integrity carried him through most of it. When the Jews were deported to the camps, Hirsch looked after and trained more than 4,000 children and teens. Leading by example, he stressed hygiene, posture and exercise, all of which kept morale high and child mortality exceptionally low. In Auschwitz, Hirsch continued caring for the children; he also had a lover and lived as an out gay man in the dwindling days of his life. Rubi Gat's documentary Dear Fredy tells the story of Hirsch — one of the few LGBTQ people whose history survived the Holocaust — through animation, archival photos and eyewitness testimony of his legacy from the children who survived the camps and honored his memory. This year's QFest film festival, which celebrates and illuminates the lives of LGBTQ people, runs Saturday through Thursday (April 28 to May 2), with all films at the Landmark Tivoli Theatre (6350 Delmar Boulevard, University City; www.cinemastlouis.org). Dear Fredy is shown at 3:30 p.m. Sunday, April 28, as part of QFest. Tickets are $10 to $13.

7. Bright Lights, Small City
Life as a young gay man in the small city of Porto Alegre, Brazil, has been lonely and difficult for Pedro. Painfully awkward, he lives in a small apartment with his older sister and has been bullied at school. At night he escapes online, where he does an internet show as the highly erotic Neon Boy. Naked and slathered in neon paint, he dances for and seduces an audience of strangers. When another camshow dancer steals his act, Pedro has to brave the outside world to put an end to the imposter. Filipe Matzembacher and Marcio Reolon's film Hard Paint is a story about small towns, coming of age and romance; it won the Teddy Award for best LGBTQ film at the Berlin International Film Festival. QFest presents Hard Paint at 9 p.m. Monday, April 29, at the Landmark Tivoli Theatre (6350 Delmar Boulevard, University City; www.cinemastlouis.org). Tickets are $10 to $13.