The Fourth Annual LaBute Fest Is Better Than Ever, Thanks to Its Actors 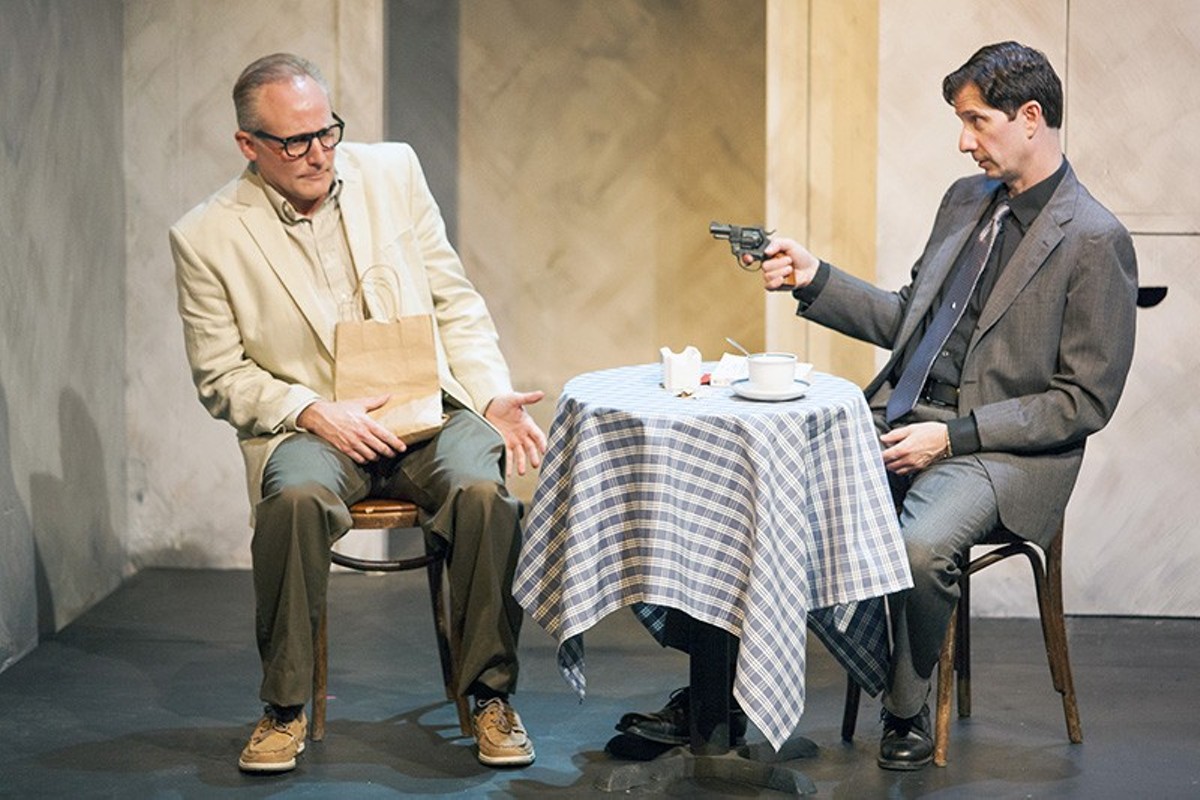 One of the lesser-known benefits of the LaBute New Theater Festival, the annual month-long event featuring a bill of one-act plays from emerging writers, is that local actors get to play a number of different roles, all in one night. It's a boon for both the audience and the actors, some of whom are frequently cast in thankless, unlikable roles. It's beneficial for us critics as well. Far too often the word count, or our own obsessions, get in the way of offering praise for actors who do excellent work.

Ryan Foizey and Eric Dean White are prime examples of my personal failing on this front. Both actors are heavily featured in this year's fourth annual LaBute Festival, and I've scribbled pages of notes about the nuances of their individual performances over the years. That secret appreciation has only translated to cursory mentions in the reviews, however. Shame on me.

So let me rectify that now. The pair close this year's festival in Willie Johnson's "Blue Balls." The play itself feels unfinished. White plays Peter, a suitor for the never-seen Nicole. Foizey is her adult son Benoit, who has been in a wheelchair since birth. Benoit is bitter and mercurial, unsettling Peter with alternating blasts of hostility and sudden civility. Peter responds with forced politeness, then fear, then hostility. Foizey is all wild gestures and exaggerated facial expressions, while White's measured retreat conceals a slow-burn that almost rescues the piece. It's not quite enough — the play, which ends abruptly, offers nothing other than the performances, with no sense of resolution or enlightenment. But watching the two of them work this fraught dynamic is very satisfying.

White also plays the exceptionally nervous Mitch in Adam Seidel's "American Outlaws." Mitch goes to a suspiciously vacant restaurant to hire a hit man, played with exquisite restraint by David Wassilak. Wassilak is another actor I've rarely written about, which upon reflection baffles and embarrasses me. He seemingly creates his characters from the inside out. Every one of them has a different physical language of movements, gestures, stances and cadences. His hit man, Michael, is resplendent in a tailored suit, but it's his lethal, confident stride that tells you everything you need to know about the killer who reads The Man of La Mancha while waiting for his next assignment.

Seidel's script is one of the best of the festival, a marvel of intonation and unspoken words lurking beneath Michael and Mitch's tense dialogue. A false ending offers an unexpectedly happy outcome for both men, but that's merely a feint to catch you off-balance when the real ending comes. It is, as noted, a great script, but watching Wassilak and White chase each other through it raises "American Outlaws" to another level.

Laurence Klavan's black comedy "Show of Affection" brings together Wassilak, Foizey, Bridgette Bassa and Emily Baker for a Thanksgiving celebration. Foizey and Bassa are fraternal twins who suspect something is different with their parents this year. For starters there's a dead dog in the backyard, and the neighbor's head is impaled on a spike by the front door. The gossip in the neighborhood is that he's one of those vampires who only attacks the people he loves, so neither sibling is too worried.

"Show of Affection" is fast and funny, its action punctuated by a string of ambushes and grisly revelations. But behind that laughter is a very sharp point about the death of relationships, and the damage done to a family when one partner emotionally withdraws but is still physically present. Baker and Wassilak together bring the play to a close on a somber, painful note — they do excellent work, not that that's any surprise.

Nor should it surprise anyone that the fourth year of the LaBute Fest is so rewarding for audiences. But it is remarkable, because any successful play requires the coordinated efforts of writers, actors, directors, scenic designers, lighting designers, technical directors, sound designers, stage managers, stage hands, box office staff and a small army of ushers. The LaBute Fest requires all of those people to come together in a short span of time and do all of that seven times over. It's an exceptional challenge, but somehow artistic directors William Roth and Bobby Miller and the entire production team make it look effortless.

St. Louis is lucky to have all of them.