The free, family-friendly food and music festival takes place outside Schlafly Bottleworks in Maplewood across three days next weekend 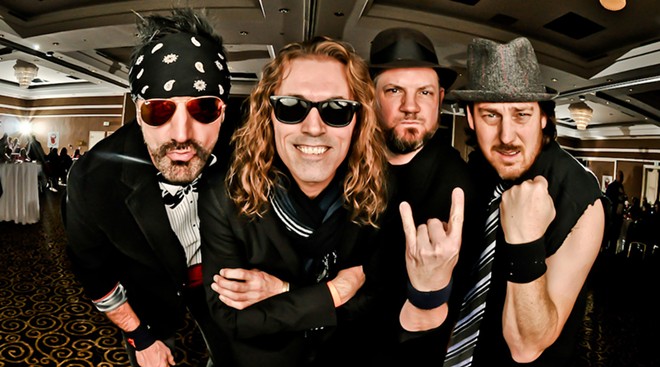 COURTESY OF THE BAND
Joe Dirt and the Dirty Boys Band will perform on Sunday, August 21, along with Story of the Year, Tech N9ne and a lineup of local favorites.

Next weekend marks the first Pig & Whiskey Festival,  a family-friendly celebration of beer, BBQ and bourbon with a mighty lineup of live music featuring Tech N9ne, Story of the Year, Sebastian Bach and many more. This free, end-of-summer block party begins on Friday, August 19 and runs through Sunday, August 21 at Schlafly Bottleworks (7260 Southwest Avenue, Maplewood; 314-241-2337).

Two weeks ago we excitedly shared with you the first details of Pig & Whiskey, and today we have even more bands to throw at you as the three-day event quickly approaches. We here at Riverfront Times have called Joe Dirt & the Dirty Boys Band the kings of the St. Louis cover/tribute circuit, and while the band itself might blush and dispute that claim, we can’t think of a better group of guys to play the outdoor stage on Sunday afternoon while the city of Maplewood feasts on the midwest’s best BBQ.

Fresh additions to the day-time lineup on Saturday include power funk group The Grooveliner, a Ben Folds Five tribute set by Nathaniel Carroll and the Party Line, a decade-spanning two hour set of covers by Bad Habit and, lastly but not leastly, The Lion’s Daughter will perform directly before Sebastian Bach headlines the outdoor stage.

After a year-long hiatus from playing shows in St. Louis, the Lion’s Daughter will take the stage at Pig & Whiskey just weeks before the release of their upcoming Turbo Covers EP, a collection of covers ranging from Judas Priest to Nirvana. Pre-orders available now at the Record Space website.

PHOTO COURTESY OF THE BAND
The Lion’s Daughter will perform Saturday, August 20, at 7:30 p.m. before Sebastian Bach takes the stage at 8:30 p.m.
So what about the name “Pig & Whiskey?” This free, three-day event features food from many of the region’s favorite barbecue joints including Stellar Hog, Navin’s BBQ, BEAST Butcher & Block, Five Aces Bar-B-Que and Dukes BBQ Shack. Many of the vendors will be offering vegetarian options, so hopefully the herbivores won’t feel left out.

Exceptional adult libations will also be on hand including Schlafly beer, craft cocktails and a whiskey row (where you can find all the styles: scotch, whiskey and bourbon). Get ideas for your own cocktails and cooking at the mixology and chef’s stage.

While you have to be over 21 to imbibe, Pig & Whiskey is a family-friendly event that includes a kid zone complete with bounce houses, video games and an opportunity to try out musical instruments provided by School of Rock. Adults (and older kids) can also attain bragging rights amongst their family and friends by riding the mechanical bull.

Without further ado, here is the full musical lineup for Pig & Whiskey 2022:

Read more and check out the full list of food options and vendors at https://pigandwhiskey.com/