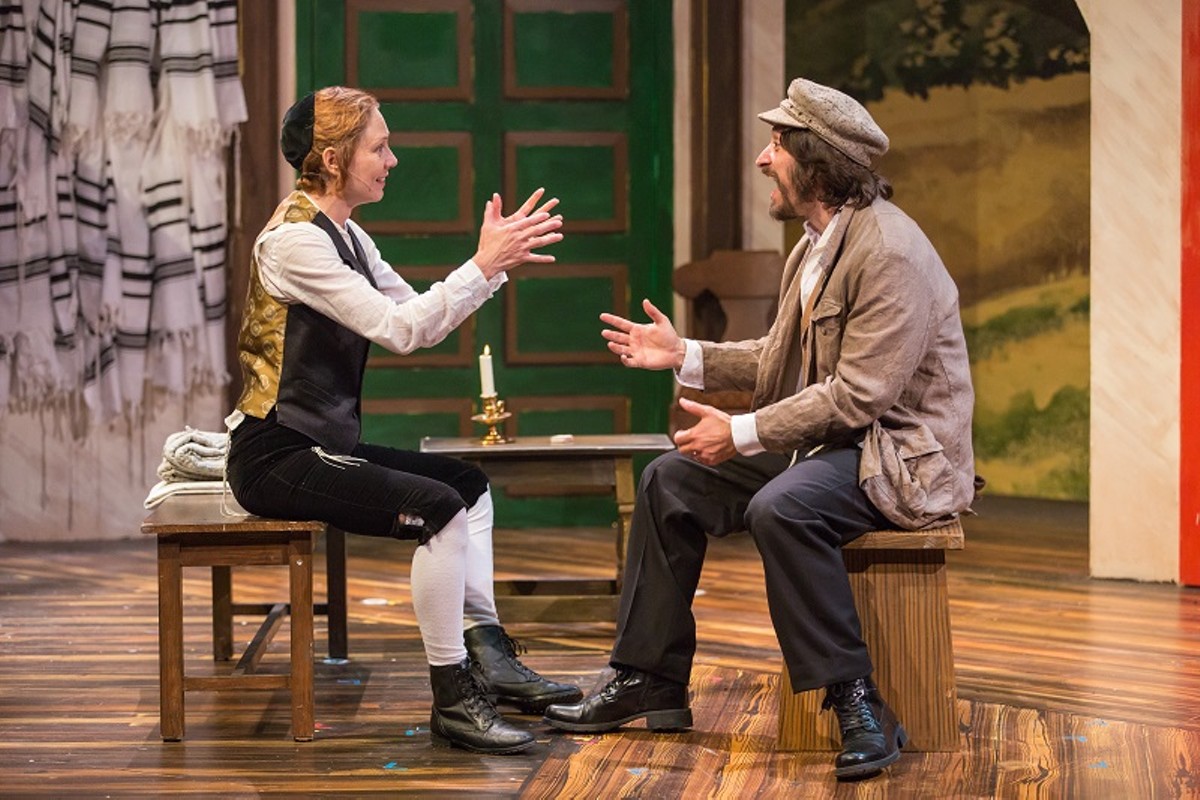 There are two explicit warnings in the program for the latest production by the New Jewish Theatre that the Yentl you're about to see is not the Yentl made famous by Barbra Streisand. Streisand rewrote the Leah Napolin play (which is based on an Isaac Bashevis Singer short story) so that it became an awards-ready star vehicle larded with schmaltzy songs and "serious" acting moments. Napolin has now wrested it back and brought in Jill Sobule to write new songs.

The result, which closes New Jewish Theatre's nineteenth season, is an astonishingly contemporary musical about gender, identity and love. Even better, Sobule has restored Singer's wry sense of humor by incorporating it into her buoyant, Klezmer-meets-pop songs. Director Edward Coffield and company have crafted a Yentl you can feel down to your soul, even if you're not a Jew.

Shanara Gabrielle is our Yentl, the only daughter of Reb Todrus (Terry Meddows), a scholar of both the Talmud and Kabbalah. She has a brilliant mind and longs to follow in her father's footsteps, but Jewish law in late nineteenth century Poland forbids such a thing. (Scenic designers Peter and Margery Spack's Polish village consists of three white houses for entrances and exits, and a massive landscape painting — framed, even — that wraps around two walls. The painting may be more impressive than the homes, if only because of the realistic way the sky glows when lighting designer Seth Jackson turns up his blues for night.)

But Yentl learns anyway, because the life of a wife and mother is a hollow prize compared to the rich treasures she finds in Jewish law. You can see her point in light of her father's sole recommendation for the traditional role played by her mother: “When we're reunited in heaven, she will be my footstool!"

Reb Todrus' death allows Yentl to move to a new village and start her life as a male Yeshiva student named Anshel. Before she departs, she forces her way into the men-only minyan held for her father's soul. What is viewed as an act of defiance is in fact one of profound love. As the men scatter to escape the abomination of a woman at a minyan, only the village idiot (who was present to reach the necessary quorum of ten men) stays to finish the service. Meddows also plays the idiot, smiling with delight as Yentl sings "Last Candle," a song in honor of this final moment of her daughterhood (in more ways than one).

If you don't enjoy the song, you'll enjoy nothing in the show. It's a showcase for Sobule's facility at marrying deceptively simple lyrics and a wistful melody to imply the depth of Yentl's loss, and musical director Charlie Mueller leads his small ensemble (guitar, bass, clarinet) through it softly while Gabrielle puts it over the top.

Yentl is soon caught up in the whirl of study and debate, and a growing friendship with Avigdor (Andrew Michael Neiman), her handsome study partner. Neiman is instantly likable in the role, which he plays as a laughing, chiding older brother. He's a man who knows what he wants — to marry the beautiful Hadass (Taylor Steward), his one-time fiancee. When Yentl is invited to Hadass' family home for dinner, she first becomes their go-between, and eventually one point in a love triangle that neither Hadass nor Avigdor are aware exists.

There is no shying away from either segment of that triangle, either. After Yentl and Avigdor share a drunken kiss, the other students sing the winking "Jonathan and David," inspired by the relationship these two friends share in the Bible. "They were really close — if you know what I mean," the boys brightly sing, before clasping hands and making a quick exit.

The Bible also inspires the love song Hadass and Yentl share, "My Sister, My Bride,” a phrase from the sensual Song of Solomon. Gabrielle delivers it with Solomonic passion, inflamed by both Hadass' beauty and her generous spirit. Their love is real, even if Anshel is not the man Hadass believes Yentl to be.

Yentl's solution to her romantic entanglement also takes a cue from Solomon: The triangle must be sundered. Yentl pursues the love she's fought for since childhood, a solitary figure in a century that wasn’t prepared for someone like her. It's an unexpectedly happy ending, all things considered — and not just because "Papa, Can You Hear Me?" is nowhere in sight.