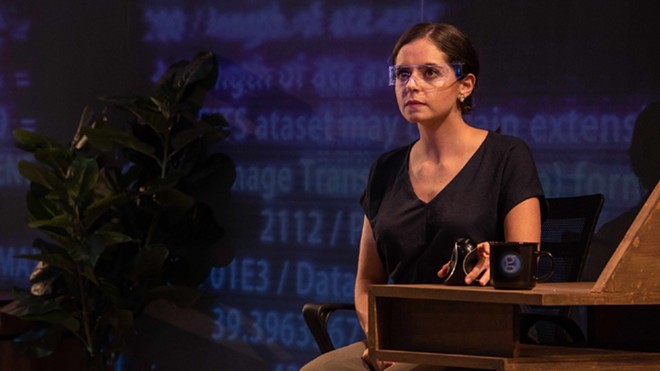 The year is 2017, and leaves are crunching under your feet outside in late October as you unlock your phone. When you slide open Twitter or Facebook — or really, any social media platform — you’re bombarded with apologies or accusations from friends or celebrities. The #MeToo movement is in full swing after a slew of sexual assault allegations against now-disgraced film producer Harvey Weinstein. For a moment, it seems as though justice is finally being served.

But as the seasons changed into the summer of 2018, playwright Steph Del Rosso couldn’t shake the feeling that none of these apologies we were inundated with seemed like enough. That’s when she began her script for the Repertory Theatre of St. Louis’ new play, The Gradient.

“I just became obsessed with the fact that these apologies were not what I hoped they would be, and that bothers me. And when something bothers me, I write a play about it,” Del Rosso says. “So, I was trying to look at what would be enough. What would feel like true accountability for me? What would be a sufficient apology? When does an apology necessitate actual accountability and relief and catharsis?”

Running from October 8 through October 24 at the Catherine B. Berges Theatre at COCA (6880 Washington Avenue), the play follows its main character Tess at her new job, a rehabilitation center of sorts called the Gradient. With an algorithm, Tess works to change men — and other people, but mainly men, another character notes — who have sexually harassed people or committed sexual misconduct.

Tess is elated to be at the Gradient, praising the algorithmic solution to life’s messier, more difficult parts. As the story progresses, the play’s complexities tangle with what Del Rosso questioned in 2018 — what would really be enough to prove someone has changed? Are apologies enough, or do we have to move further?

“One of my favorite parts is to watch this powerful, smart female character come into her own power,” Powell says, “and give herself the permission and the validation that she may have been waiting for someone else to give her, and just seize that ownership of her own life and her own power.”

Del Rosso explains a lot of her plays are about women taking up space in a way she relates to, navigating a career in an industry that’s dominated by white men. Developing stories where women can take up space, deal with issues like sexual harassment but also find a catharsis through comedy is something important to Del Rosso. She never wants to retraumatize her audience, so providing moments of relief is important to her.

The writer says she thinks “comedy is necessary to get people to pay attention.” If you’re laughing, you’re open to receiving, Del Rosso adds.


At its heart, The Gradient is a complex comedy. Powell says she hopes the audience can see themselves — and other perspectives — in the story.

When the hour and forty minutes is up, there’s no one thing Del Rosso or Powell wants people to take away from the show, but they do want you to know it's okay to laugh. Powell wants you to feel some sort of release while also finding something truthful in The Gradient.

Del Rosso says as long as you’re not thinking about what to eat for dinner five minutes after seeing the show, she’s happy. She’d rather you dislike the play and it get under your skin than not feel anything after seeing it. If it encourages some sort of analysis or reflection, she'll be happy.