The Trial Brilliantly Brings Kafka to Life as an Opera in Its U.S. Premiere

A man is awoken and informed that he is being arrested, but the charge is never clear. So begins Franz Kafka’s 1925 novel The Trial, but so too could begin any number of stories ripped from the headlines in the decades since. It matters little who makes the arrests — Stalin’s men in 1930s Russia or U.S. intelligence forces in the Middle East after 9/11. A show trial is a show trial (or maybe there’s no trial at all). The detainee’s fate is clear from the moment he’s apprehended. His guilt or innocence doesn't matter.

The Trial is now an opera, thanks to Philip Glass and Christopher Hampton. Their faithful adaptation of the novel first premiered in Wales a few years ago and then was a smash hit in London; Opera Theatre of St. Louis' staging of the show, which kicked off Sunday, is the U.S. premiere.

And what a premiere! Sunday's flawless performance came with one of those endings where the audience was holding its breath and didn’t even realize it until that startling closing line (no spoilers here, though it’s in the book). You could almost hear the collective gasp — and then everyone jumped to their feet. Theo Hoffman, who stars as the hapless Josef K., came in for the most applause, and rightly so: He was on stage for every minute of the show, and he was simply incredible.

On first thought, it might seem like an odd fit, Kafka as opera. Yet as becomes readily apparent watching this production, nothing could be more apropos. Reading Kafka, after all, is like being in a nightmare, where nothing quite makes sense, yet the absurdity on the page strikes at a greater truth. It’s like having a fever; everything is at once both blurry and startlingly clear. And what is opera if not a fever dream? Of course people don’t go around in real life singing their conversations — much less baring their hearts in arias. Yet the truth on stage in a great opera strikes at the heart of the human condition. Its artifice is a path that allows us to explore our secret hopes, our dreams, our fears.

The Trial has fewer moments allowing for bared souls than you’ll find in operas from the golden age (there is never a moment when Josef K. faces the audience and sings of how he aches for Fräulein Burstner or must fire his lawyer — and rightly so). But the unvoiced desires and fears... they are there, always lurking out of the corner of his eye. 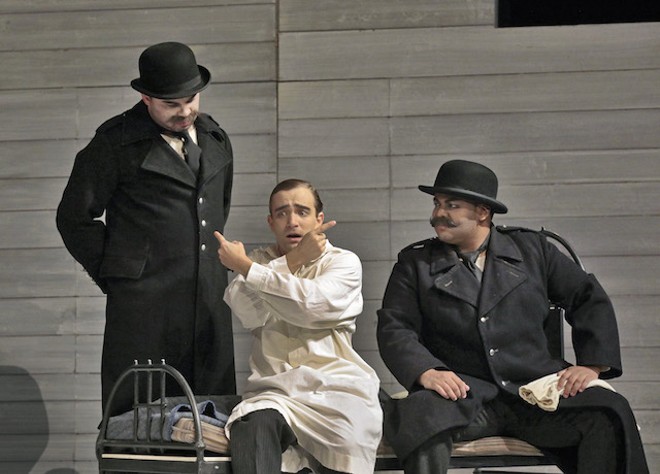 PHOTO (C) KEN HOWARD, 2017
Robert Mellon (left) and Joshua Blue (right), with Theo Hoffman, provide the comic relief as a pair of corrupt guards.
Director Michael McCarthy’s staging relies on a simple set where someone always seems to be watching Josef K. The singers’ powdered faces might be an homage to Charlie Chaplin, but they also suggest German expressionism. They’re unsettling, the slightly off-kilter visages you'd encounter in a bad dream. That eight singers play more than twenty parts only adds to the dissonance. Everyone seems vaguely familiar even upon first entrance — and that familiarity is menacing rather than comfortable. It helps that the cast is terrific. Everyone is good, but Susannah Biller, who plays two of the main female parts, is especially so. As the guards, too, Robert Mellon and Joshua Blue are quite funny, the comic relief brought to bumbling life.

For all its black humor — and the audience did laugh at loud, much more than you'd think — the show remains harrowing. That Glass’ music pays homage to Bernard Herrmann’s jangly, paranoid score for North by Northwest punctuates the feeling that you’re watching a suspense classic turned on its side. It’s a world where everyone else may be in on the joke... or maybe there isn’t even a joke. They’re just laughing at you out of contempt.

Kafka himself died before The Trial was published — years before his name became synonymous with bureaucratic nightmares, and nearly two decades before two of his sisters were themselves apprehended by a government that didn't have to explain its charges against them. One died in the camp at Chelmno; the other at Auschwitz.

In translating Kafka's classic tale to opera nearly 100 years after its writing, Glass and Hampton leave us with unsettling truth. History’s grand sweep shows us that the surreal is more real than we’d like to think. We should probably all be a bit more paranoid.

Sarah Fenske is the executive editor of Euclid Media Group, overseeing publications in St. Louis, Detroit, Cincinnati and Cleveland. She is the former host of St. Louis on the Air and was previously editor-in-chief of the RFT and the LA Weekly. She lives in St. Louis.
More
Scroll to read more Arts Stories & Interviews articles (1)
Join the Riverfront Times Press Club