Things To Do In St. Louis This Halloween

Get your chills on at events at the botanical garden, aquarium, City Garden and more 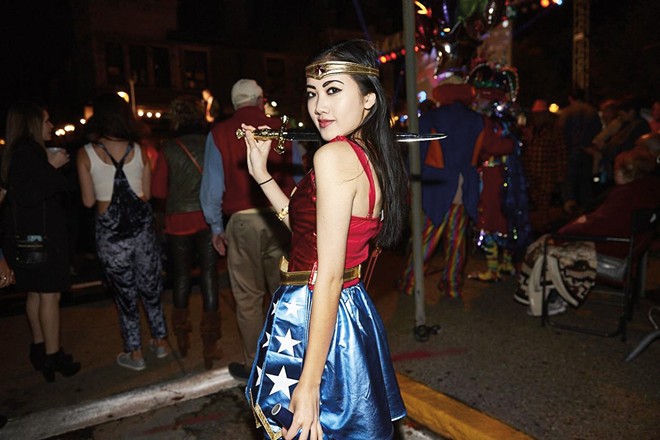 Who else is ready for a week of delightful chills, sugar highs and happy, costumed revelers, both kid and adult? Yep, we thought so: just about all of you.

So read on for a look at some of the many fantastic ways to celebrate Halloween in St. Louis.

Dressing up your pup may be nice, but dressing up your pup and yourself? It's the couple's costume of every dog lover's dream. You and Fido will get your chance to dress for spooky-season success at Barktoberfest, a pup-friendly Halloween soiree hosted by the Young Friends of the Humane Society of Missouri. The event, which takes place at Urban Chestnut Midtown Brewery & Biergarten (3229 Washington Street), will feature a host of pet-friendly activities, including a costume contest with prizes such as pet portraits and Blues tickets. The price of admission is $25 and includes entry to the beer garden, a voucher for one drink and entry into the costume contest. The fun starts at 5 p.m. Advance tickets are available at e.givesmart.com/events.

The Missouri Botanical Garden (4344 Shaw Boulevard, 314-577-5100, missouribotanicalgarden.org) invites you to a night of frightening spirits — oh, and booze, too! — as the garden celebrates Halloween with Spirits in the Garden, when guests can sample spirits from local and regional distilleries, wineries and breweries. While you're at it, you can show off your attire in a costume contest, solve a scavenger hunt, catch classic horror movies, meet local paranormal investigators or learn about the "spirited" history of the garden. Enjoy a fortune teller, fire performer, stilt-walking Frankenstein's monster, airbrush tattoos and the musical talent of St. Louis-based artist D.J. Nune is Lamar Harris. Spirits in the Garden is open to visitors 21 and over. The event begins at 6 p.m., and tickets are $30 for members and $35 for nonmembers. 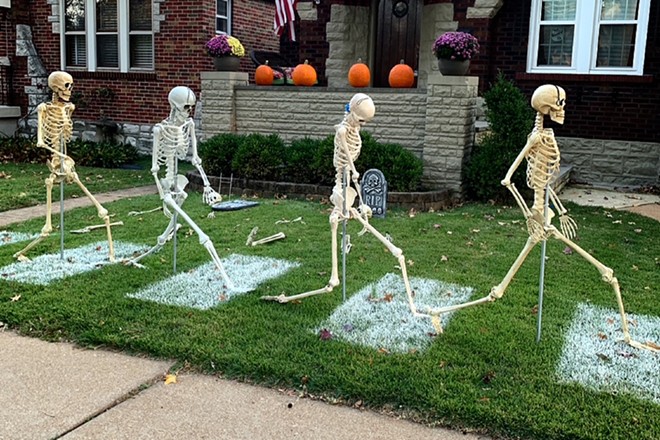 JAIME LEES
This Halloween you might go out to visit a friend and find yourself on Abbey Road.

When the annual Fall Festival takes over downtown Collinsville, roads will be blocked off. There will be trick-or-treating for kids. A chili cook-off. Bounce houses. Carnival games. A critter-crawl pet parade. And it's all packed into five hours. The highlight of the day, though, is always the costume contest. Described as a "family-friendly event," this is a "not-so-scary" contest that will feature multiple categories ranging from TV character costumes to homemade garbs. The event will take place from 10 a.m. to 3 p.m. Tickets are free but required.

St. Louis has no shortage of Halloween celebrations. But we would be remiss to leave out one of the city's most notorious bashes: the Legendary CWE Halloween. Taking place in the streets of the Central West End neighborhood, the party begins with daytime family-friendly activities. Then, as the sun dips and the kiddos head out, the wild rumpus starts. Partygoers 21 and up dressed in every costume imaginable pack the streets, ducking in and out of the neighborhood's many food and drink establishments. Capping off the evening is the costume contest, a catwalk affair showcasing "elaborate, complex and outrageous" costumes and $6,000 in cash and prizes. The festivities kick off at 11 a.m., go to midnight and are free to attend.

Horror on the River

What better way to celebrate Halloween than with a view of the moonlight reflecting off the flowing waters of the Mississippi River? At 9 p.m., a riverboat filled with costumed revelers will embark from the dock right next to the Gateway Arch. The two-hour Halloween Costume Cruise presented by Riverboats at the Gateway Arch (50 South Leonor K. Sullivan Boulevard) will feature a DJ, dance floor, light hors d'oeuvres, a cash bar and a costume contest. We suggest dressing as a riverboat captain, just in case something happens to the actual captain and you need to step in and save the night. Tickets are $26, and the boat boards at 8:30 p.m.

Most of the time these days, you only hear of the youths causing mayhem in the city. They're stealing cars and running into shit. They're dangerously using guns. They're running around at all hours of the night. But now it's our turn to have some fun. The adults. The hard-working, 8-to-5-grinding, slightly bitter adults. Our fun will be law-abiding and safe and hopefully end early enough so we can get to bed at a reasonable time. Have that fun by celebrating Halloween with some fellow grownups at the Adult Halloween Costume Party & Bonfire at the COFLA City Garden (6112 Ridge Avenue). From 6 to 10 p.m., you'll find food trucks, a DJ, a bonfire and more at the Circle of Friends Learning Academy's community garden space in north St. Louis. The event is 21 and up, and tickets are $10 on Eventbrite. 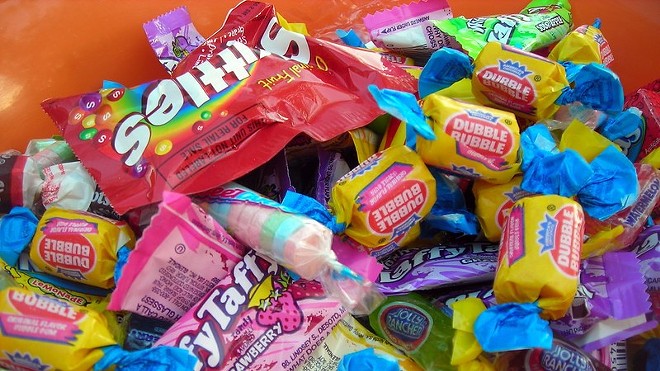 In honor of Halloween, the St. Louis Aquarium will be open to pirates and pirates only. Want to get in? You need a pirate name. Want some candy? Better call it "pirate booty." Want to tour the aquarium? This isn't just an aquarium. This is a "Pirate Quest for the Sunken Treasure." During the evenings this weekend, the 120,000-square-foot St. Louis Aquarium will be transformed into a pirate-themed aquarium. There will be pirate ships, treasure caves and, of course, fish, sharks and stingrays swimming around in the tanks. Trick or Treat at the St. Louis Aquarium (201 South 18th Street, 314-923-3900, stlouisaquarium.com) will take place from 5 to 8 p.m. Tickets cost $25 for adults, $18 for kids ages three to 12, and are free for those two and under.

Few are better at evoking a delightful sense of dread than acclaimed filmmaker Alfred Hitchcock, and Psycho is undeniably one of his most tension-filled offerings. St. Louisans can pair the 1960 neo-noir tale of Norman Bates and Marion Crane with a magnificent rendition of the film's powerful score during the St. Louis Symphony Orchestra's Psycho. During the event, the symphony will perform Bernard Herrmann's score live while the movie plays on a big screen at Powell Hall (718 North Grand Boulevard, 314-534-1700, slso.org). At 6:30 p.m. the SLSO will hold a costume contest and serve themed cocktails in the foyer. The show begins at 7 p.m., and tickets are $35 to $65. 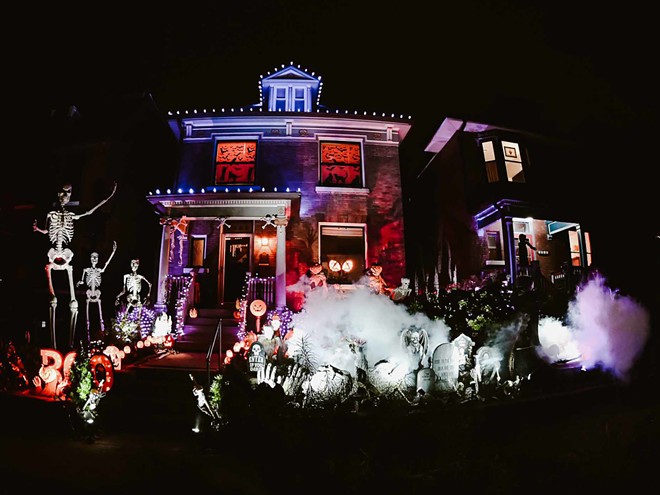 Sarah Lovett
Stop by Metra Mitchell's Halloween home day of, and you'll be treated to a tour of her extensive displays.

For all the many events that surround this festival of the dead, with all the scary stories, costumes, candy and more, the best Halloween celebration is probably what's happening in your neighborhood when the sun starts to dip on Monday night. So regardless of whether you're a kid finally getting to wear that cool costume and tell a lame-but-fun joke (or a nonsensical one you made up), a parent being dragged around by your kiddos or walking 10 feet behind them because you're "so not cool," a beer-drinking-candy-hander-out-er hanging by a frontyard bonfire, or someone hiding inside with a scary movie and the porch light off — this is your moment. Enjoy the magic of Halloween, all!

The annual Haunted Soulard Barcycle Tour takes place after the sun has set, winding through the creepy brick streets of the iconic neighborhood. The oldest neighborhood in the city, Soulard has a wealth of haunted homes, streets, alleys, empty schools and abandoned factories. Attendees will get to experience all of it while riding a bicycle together and sipping some beers. People don't have to get on and off the bike to load up. All of the drinks are supplied on the bicycle for you to enjoy while visiting the haunted sites. The event runs 7 to 9 p.m and kicks off from St. Louis BarCycle (1013 Ann Avenue, 31-239-1884, stlbarcycle.com). Tickets cost $50.