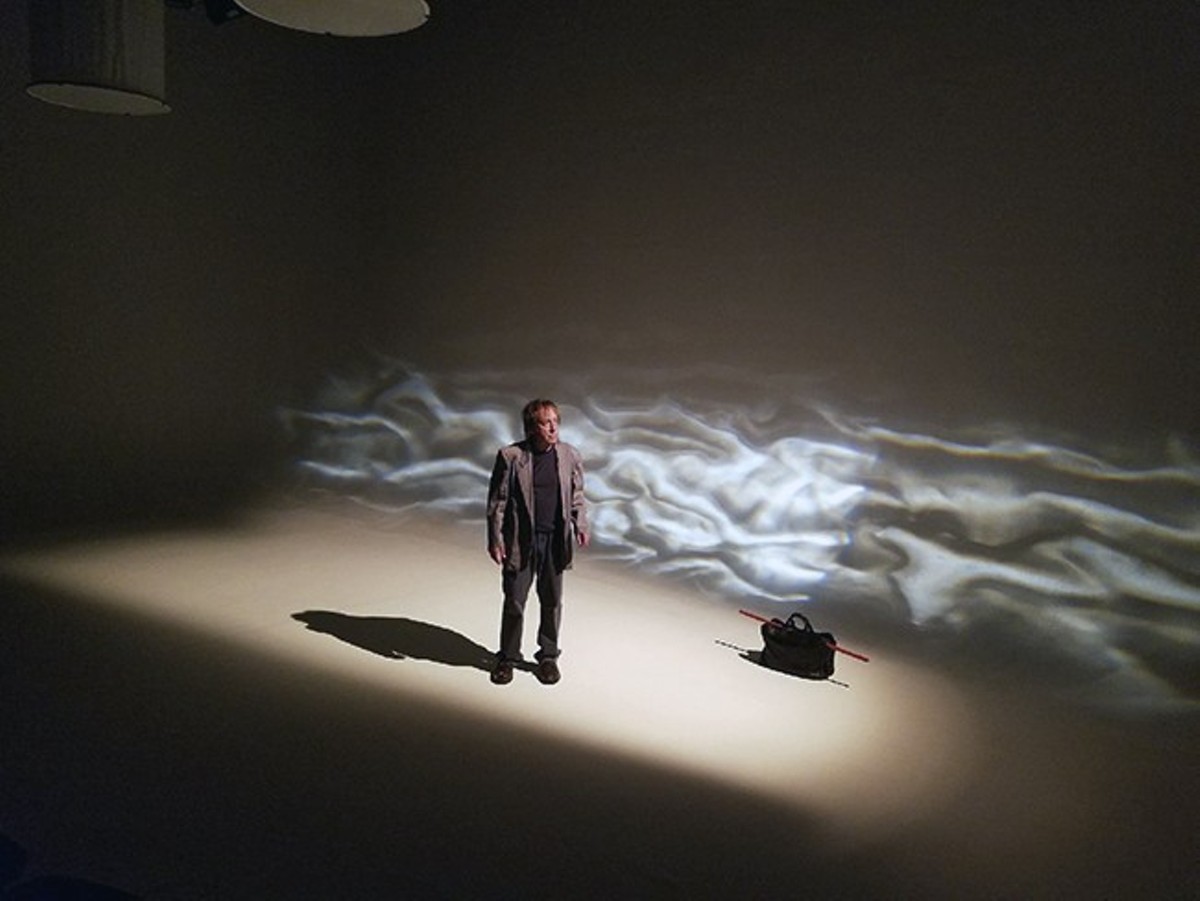 Joe Hanrahan muses on home and heartache in Title and Deed. LIZ HENNING

Written by Will Eno. Directed by Sarah Whitney. Presented by the Midnight Company through June 24 at Avatar Studios (2675 Scott Avenue; www.midnightcompany.com). Tickets are $15.

Will Eno's one-man show Title and Deed is part monologue, part mystery. It's rife with clever wordplay, which is delivered by a lone philosopher preoccupied with his own wanderlust. The more he talks, the more you get the feeling he's not wandering so much as he's running away from home. It's an unusual show, one that approaches its topic like a wary animal, skirting around it only to circle back again.

It's a prime vehicle for Joe Hanrahan, St. Louis' reigning king of the thinking man's one-man show. It's no surprise that Hanrahan's own Midnight Company would mount it with himself in the lead. It's also no surprise that Hanrahan would nestle into the discursive role like a hand in a glove. Still, there is something at work in this production that feels like an exorcism — if not for Hanrahan, definitely for his audience.

The unnamed protagonist walks into the performance space carrying a valise with a cut-off mop handle laid across its opening. Behind him is a white wall marred only by prismatic whorls cast by the heavy-duty lights. For the next hour he talks about home — both the physical place and the psychic sense of it — and occasionally brings out a treasure from his bag.

LIZ HENNING
Shadows form a major part of the visual look of this show.

There is a definite arc to the man's conversation, which begins with the friendly plea, "Don't hate me, if you don't mind," and repeated promises that "I'm not really this gloomy, it's just my voice." His probing questions about this new place he finds himself in are answered by his own explanations of the customs of his home; it's different than here, but also the same in many ways.

Avatar Studio's back wall gently curves into the floor with no sharp angles, so the shadows cast by our protagonist take on fun-house distortions. It's as if we're seeing many versions of the man ... or perhaps he's left a little bit of himself behind in his former stops, and they'll never catch up to him.

What has caught up to him recently is regret. He explains that he moves around because he holds out hope that a change of scenery will change him. The memory of a lost chance at love leads into his recollections about the deaths of his parents. With the hint of a smile, he offers, "Maybe you're doing what I'm doing — making something into something else, and then killing the first thing."

In the hands of a lesser actor, this gnomic dialogue could lull you into glassy-eyed torpor. Hanrahan spools it out like Theseus with his ball of twine, leading us into the heart of the labyrinth. When the man draws his mop handle, we've found the beast's lair. He sets his jaw and his eyes fix on his secret foe as he lashes his right thigh with his weapon. A pause, and he crashes his sword against his thigh again. "This is for her!"

Except what I heard, sitting in the audience, was, "This is for him." Hanrahan dedicated the show to his late son Travis, who died in February. But I felt my own personal history echo in those words. I was sitting in one of those shadows that Hanrahan's figure cast on the back wall, beating myself up for a dead sibling I couldn't save and never mourned, lost in the memories of a home that no longer exists.

And then Hanrahan, or Will Eno, or one of those shadows, smiled that queer half-smile and signed off with the good advice, "Don't stay lost for too long — they stop looking for you after a while."