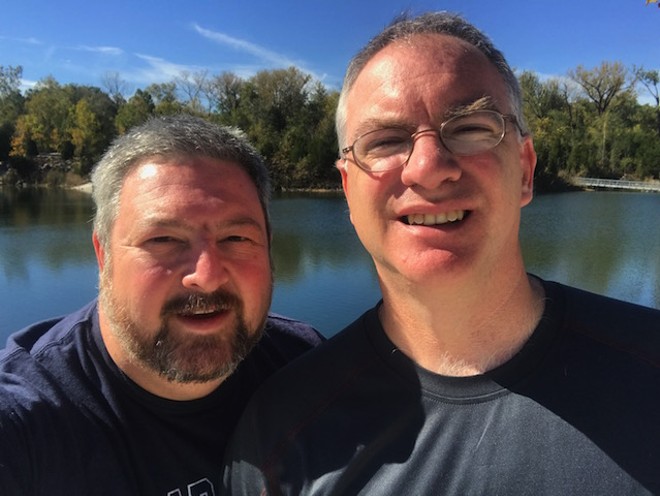 COURTESY OF TODD SMITH
The first time Todd Smith got shot, he'd just gone to 7Eleven for a Slurpee. The shop was in a not-so-great neighborhood, and he ended up being confronted by gunmen on his way home. He ran; they shot him in the leg.

The second time came ten years later. On February 7, 2008, Smith was covering the Kirkwood City Council for the Suburban Journals, the community newspaper group affiliated with the St. Louis Post-Dispatch, when a gunman opened fire at the meeting.

The man, Charles "Cookie" Thornton, had been a regular presence at council meetings, ranting about corruption. He killed two police officers, the public works director, two council members and the mayor. Smith, who was shot in the hand, was the only victim who survived.

Rehabilitation wasn't easy — Smith says he needed extensive physical therapy — and it was made even more difficult by what happened next: The paper laid him off just fourteen months later.

Still, he's philosophical. Explaining that he worked for a few years after that at the State Journal-Register in Springfield, Illinois, before being laid off there too, he seems to shrug almost audibly. "The newspaper business," he says.

At 47, Smith has now survived twenty years after the first shooting and ten years after the second — which could make 2018 seem like a particularly ominous year. If you've been shot in 1998 and shot in 2008, what do you in 2018 but spend the year hiding under the covers — especially in a nation (and a city) where random gun violence seems all too common?

But rather than let the incidents stop him, Smith has turned them into literature. His soon-to-be-released book, Murder, Romance and Two Shootings, is a lightly fictionalized memoir of the tragic events and his love affair with his partner, David Kaplan, who stayed by his side as he recovered after the second shooting. They married in 2009 and now live in Edwardsville, Illinois, where they are raising their young son (he'll be three in March).

The book is being released by Nine Star Press, an Albuquerque-based publisher specializing in gay and lesbian themes. Smith says he worked on it on and off for years, finishing a first draft during National Novel-Writing Month in 2011. Becoming a dad slowed his progress — "I spent a couple years at home taking care of him," he says. "I kept talking about getting the book done, and I finally did it when he went to daycare."

For Smith, writing the book was "somewhat therapeutic," but he acknowledges that the violence he's experienced has left him somewhat cynical about the concept of "safety" in modern America. Of mass shootings, he says, "I try my best not to watch too much coverage of [them], or it just brings me back to it. There haven't been any congressional bills to slow any of that down, and so I now live in the reality where it doesn't surprise me."

He adds ruefully, "Life is a war zone, in my viewpoint. I can't go back to thinking things are safe."

See Smith's website for more information about his book.

Editor's note: A previous version of this story failed to account for one victim, a cop shot before Thornton made his way into the meeting. We regret the error.