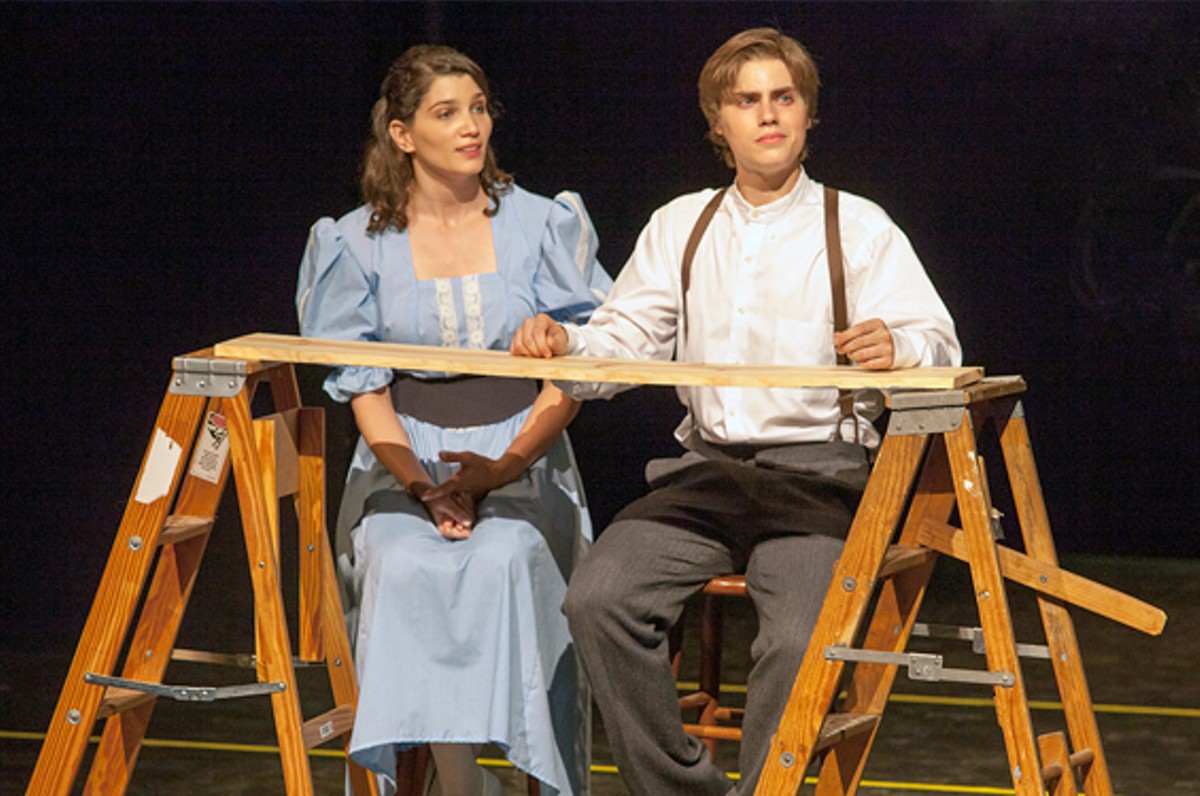 Our Town: Always worth returning to. John Lamb

Thornton Wilder's Our Town is back in town, which is very good news indeed. In recent years Stray Dog Theatre and the Webster University Conservatory also have staged this Pulitzer Prize-winning evocation of American life. This week the mantle of temporary ownership has passed on to Insight Theatre Company. Surely there is always an audience for Our Town, comprised of viewers young and old, both first-timers and repeaters who know how important it is to their well-being to see the play every few years.

Wilder described the arc of his 1938 script as "the life of a village against the life of the stars." Our Town artfully manages to juxtapose the mundane with the eternal. The genial Stage Manager introduces Act One as a typical day (May 7, 1901) in the tranquil hamlet of Grover's Corners, New Hampshire — though any small town could fill in, perhaps even the Bedford Falls of It's a Wonderful Life.

The morning routine begins simply enough; milk is delivered, breakfasts are prepared. But then the stakes are raised. Act Two moves on from daily life to love and marriage; Act Three ponders the unknown afterlife. The Stage Manager evolves from cracker-barrel philosopher (think Shelby Foote in Ken Burns' The Civil War series on PBS) to supernatural spirit. Wilder's attempt to plumb the unknown is audacious. Yet in the ensuing 75 years, what poet, essayist — or, for that matter, dramatist — has equaled his ability to compel us to pause and marvel at the fragile and transitory gift of life? Our Town can be viewed as a living psalm.

When it debuted in 1938, Our Town also was an experiment in unconventional theater. There was, for instance, no front curtain. Today of course, the lack of a theater curtain is the norm. So to one extent, time has caught up to the play's inventiveness. But consider this: Our Town spans a dozen years between May 1901 and the summer of 1913. In 1938 those years were only a generation past. Surely, the play's first audiences viewed Our Town with the smile of recognition. They could still remember when you didn't have to look for automobiles before you crossed a street. Now a century has passed since the summer of 1913. Today Our Town plays out like a time capsule unearthed.

Although every production adheres to the play's contrivances, each new director seeks to put his own personal stamp on this masterwork. Apparently director Tom Martin has chosen for his template a phrase from the Stage Manager's final speech to the effect that the solar system is "just chalk." There's a lot of chalk in evidence here. Martin also relies heavily on sound effects, which is probably OK (although the constant bean snapping becomes an irritant).

Martin has assembled an engaging ensemble of nineteen actors. Alan Knoll and Amy Loui portray newspaper editor Webb and his wife. Their daughter Emily, who is pretty enough for all normal purposes, is played by Taylor Pietz. John Contini and Peggy Billo are Dr. and Mrs. Gibbs. Jack Dryden portrays their carefree son George. Joneal Joplin is an admirably straightforward Stage Manager. But it would almost be bad form to review actors in Our Town. Mostly you just envy them the privilege of participating in a profession where they can contribute to such a beautiful experience.

For that matter, you don't really review the play either; rather, you appreciate it. You inform readers that another production is on view for another all-too-brief engagement. Then you go out looking for heliotropes. Emily tells us that they smell wonderful in the moonlight, so they surely must, because Our Town doesn't lie. It is an evening abundant with truths, small and large.