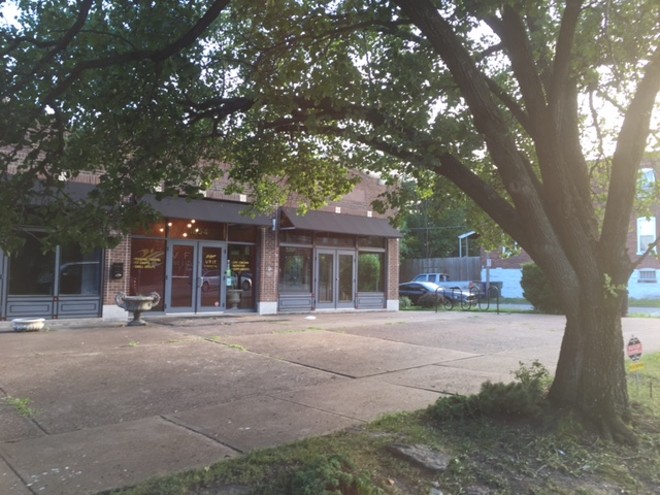 Urban Fort Play Cafe, which is being planned for 1854 Russell Boulevard, will be part play place for children under seven and part parent hangout. Its creator, Megan King-Popp, who is herself a city resident, says she stumbled on the idea after realizing how few options exist for young kids in the city.

After getting a degree in elementary education and working at a preschool, King-Popp opened an in-home daycare for children. She had decided to take the kids on a fun trip to Forest Park last August when she had her big realization.

“I get them all in the car, which takes a lot of effort, and it literally started down-pouring as soon as I closed the door. It was so frustrating,” King-Popp says. “I thought about all the places I could take them, and they were all for older kids. Everything that exists for young kids is all in the county, and as a city gal I just don't like to go to the county.”

King-Popp started searching for indoor play places for young children in the area when she stumbled across “play cafes,” which had just started popping up in Chicago.

A week after learning about play cafes, on a family vacation, King-Popp tested one out with her husband and two-and-a-half-year-old, Gideon.

“All my two-year-old really wanted was to make sure we were in the room,” King-Popp says. “Gideon played for three hours while my husband did work, and I walked around with the manager picking her brain. It was bliss.”

Megan King-Popp
The sketch of the new family center includes a treehouse and a slide, among other activities, for kids under the age of 7.

What makes Urban Fort unique is that it’s not just a daycare — it’s a place for adults too. The cafe offers space for parents to finish up emails, bond with other parents, and even form a solid community, all in the presence of their children. In addition to providing services like parent seminars, lactation consultants, and support groups, Urban Fort brings a social aspect to watching over children.

“Young parents don't want to give up that part of our life,” King-Popp says. “The purpose of Urban Fort is to meld the idea of a play space for young kids with a hangout space for adults.”

King-Popp recognized the importance of having a solid community of parents out of personal experience. After going through postpartum depression in her first year of child-rearing, she felt isolated from other parents with her in-home daycare business. King-Popp was interested in fostering a sense of friendship between young parents.

“Oftentimes, moms aren't sure how to meet up with other parents, especially if their friends don’t have kids. It's just difficult to maneuver that world when your friends aren't in it," King-Popp says. "Part of my goal is to give parents that outlet to meet new people and make new friends. Urban Fort provides that opportunity to maintain your adulthood while looking after kids."

These cafes offer different payment plans, depending on how frequently families plan on visiting. Urban Fort, for example, charges an $8 drop-in fee for a full day of playing, a $65 fee for a ten-visit punch card, and more expensive seasonal and annual memberships.

King-Popp's play cafe will offer all sorts of activities for children — music, art, science, sign language, parent-and-me yoga, and a maker community for teaching entrepreneurship. King-Popp recently signed a lease for her new space and is raising a little more money for startup costs through Indiegogo. She hopes to open the business by October.