USA Today Is Wrong About O'Fallon 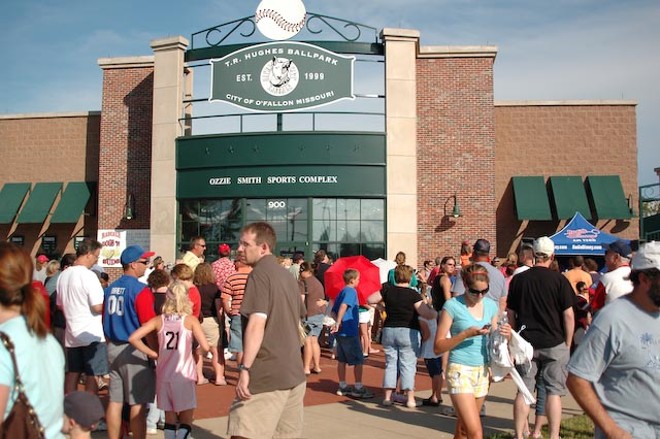 Photo via Flickr / coopgas1
Literally one of the only things to do in O'Fallon at all, and even this sucks.
Late last week, USA Today published an article ostensibly running down a list of the 50 most livable cities in the U.S., looking at factors such as population size, median home value, poverty rate and education to determine which places in America are best to live.

But USA Today really pooped in the punch bowl on this one. O'Fallon, Missouri is ranked No. 8 on the list: surely proof enough that said list is complete bullshit. How the hell did they let this happen?

Before we go any further, a disclosure: My knowledge of O'Fallon comes from the two decades I spent growing up there, absorbing its complete lack of culture and absolute over-abundance of fast food even while evolving into the social degenerate who comes before you today.

And so you can take it on good authority that O'Fallon is a desolate wasteland of chain eateries and parking lots, where the hub of all cultural life is a Wal-Mart located adjacent to a Home Depot, less than a mile away from a Lowe's. Natives like me are aware that O'Fallon is probably best-known for being home to no less than seven Quiktrip gas stations in its 29.20 total square miles. O'Fallon has more apostrophes in its name than it has interesting things to do.

Now, we'll concede the city would hold the title of "white-flight capital of the state" if not for all the former O'Fallon residents who have already packed up and moved to Wentzville in abject fear of the creeping encroachment of their black fellow citizens. We can trace this phenomenon to the early 1900s, when scared white people fled St. Louis city for north county after black people moved in, then fled north county for St. Charles County when the schools got desegregated, and have since been creeping further and further into the farmlands to the west as the decades have worn on and the people with more melanin in their skin have proven less and less interested in self-segregation.

In fact, according to data from the 2010 census, O'Fallon is 89.9 percent white, eking past even Chesterfield — which a colleague once dubbed "the white bread that white bread makes its sandwiches with" — by more than 3 points.

Speaking of sandwiches, O'Fallon is home to the "Arch Nemesis," a  monstrosity involving two quarter-pound beef patties, a grilled chicken breast, four slices of cheese and a side of heart failure. It is brought to you by the River City Rascals, a "professional" baseball team who plays in the Frontier league, which no one has heard of. The team's concession stand has also been known to sell pizza by the slice, which they purchase from Domino's multiple times a week and for which they never tip the driver.

Speaking of pizzas, the Imo's pizzas you eat in O'Fallon are probably made not with the Provel cheese you crave, but rather with with Zesty Pizza Loaf, a less expensive and less flavorful alternative. You probably never even heard of Zesty Pizza Loaf before now. You have been played for a fool.

Speaking of fools, remember that guy who ate a bunch of acid, attacked a friend with a medieval spiked club and then ran out into the street naked before biting a cop's face and being shot twice and thrown in jail? That happened in O'Fallon, because it is so boring there that people are forced to resort to drugs and subsequently lose their entire minds.

Notably, an absence of crime was one of the metrics that 24/7 Wall Street, the financial news and opinion operation that produced this deeply flawed list for USA Today, used in its findings. While it is true that O'Fallon's overall violent crime rates are low, it is also true that when its citizens do decide to break the law, they commit some of the most fucked-up crimes humanly possible. Sometimes they even export their trash and terrorize us fine simple city folk.

And can we talk about Winghaven? Brought to you by notable bad guy Paul McKee, the 1,200-acre city-within-a-city located in the southwest portion of the city limits seems to have been built solely around the premise that "round-a-bouts are fucking awesome, man" and provides little of value unless you are the type of person who would pay money at the Yuppie Puppy for a "relaxing muzzle massage" for the dog you keep in your purse. Winghaven is a pretend city that couldn't decide if it wanted to be surreal and terrifying like New Town or boring and unremarkable like every other part of O'Fallon, so it just settled on being stupid and unnecessary instead.

Civic Park sucks. You can get much cheaper screen printing and embroidery on the internet than you can at Sportsprint. That water tower ain't even that tall.

All of those people posting hateful and racist comments at the bottom of every news story? It is a proven fact that every one of them lives in O'Fallon, or has at one time.

This isn't to say that every single person who lives in the city is a bad person — there are also those who hate it there and are forced to stay against their will. Pity them.

And pity poor USA Today, whose journalism has fallen so far they apparently can't even employ fact-checkers anymore.

Daniel Hill is editor at large for the Riverfront Times and he demands to be taken seriously, despite all evidence to the contrary. Follow him on Twitter at @rftmusic.
Scroll to read more Arts Stories & Interviews articles (1)