The public art display features nearly 90 portraits of survivors, including 12 from St. Louis, by Luigi Toscano 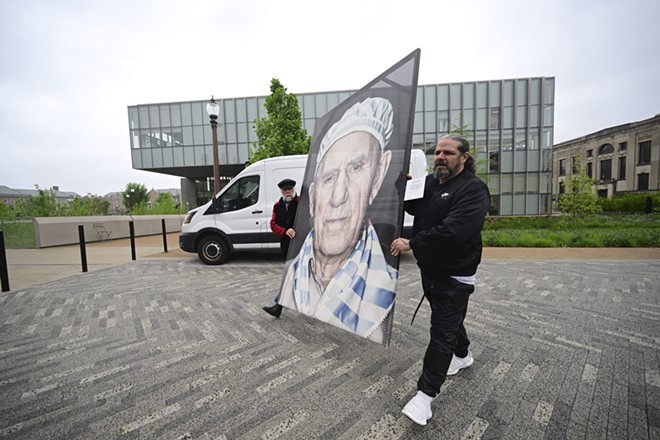 VIA LIAM OTTEN
Luigi Toscano carries one of his 90 portraits that are now displayed at Tisch Park at WashU.

For the next two weeks, nearly 90 people will fill the lawn at Washington University. Their faces stand over seven feet tall. They press up against the sidewalk. They force anyone and everyone to stop, to look at them, to stare into their eyes and to think.

These are the faces of survivors of the Holocaust.

They are part of the public art installation, Lest We Forget, captured by photographer Luigi Toscano, which is running through Sunday, November 6, at WashU’s Tisch Park.

“If we forget the past, we are doomed to repeat it — and this is our chance — if we remember what happened,” Toscano says.

Toscano began photographing survivors of the Holocaust seven years ago. He was a talent manager at the time, but after he visited the Auschwitz concentration camp in Poland, he was moved to begin photographing survivors. He started in his hometown of Mannheim, Germany, which had a small concentration camp. He placed the subjects in front of a black background and took zoomed-in images of their faces — and his lifelong project took off.

Since then, Toscano has captured the images of nearly 400 survivors of the Holocaust who live in Germany, Ukraine, South Carolina, and now, St. Louis. His portraits have earned him a 2021 UNESCO Artist for Peace.

“People asked me — what is my motivation? And my motivation is totally simple,” he says. “I am against antisemitism, racism and any kind of hatred. If I showed this exhibition in the museum or in the gallery, nobody will come. But if you put them in the public space, everybody stops.”

He has displayed his images all around the world, including Vienna, Austria; Paris; Kansas City, Missouri; Pittsburgh; San Franciso; and even at the United Nations.

But sitting at WashU on a chilly October afternoon, Toscano is still animated, leaning forward in his picnic chair, his hands moving with every word. “People ask me — ‘Luigi, what is your other project?’ No, this is 100 percent,” Toscano says. 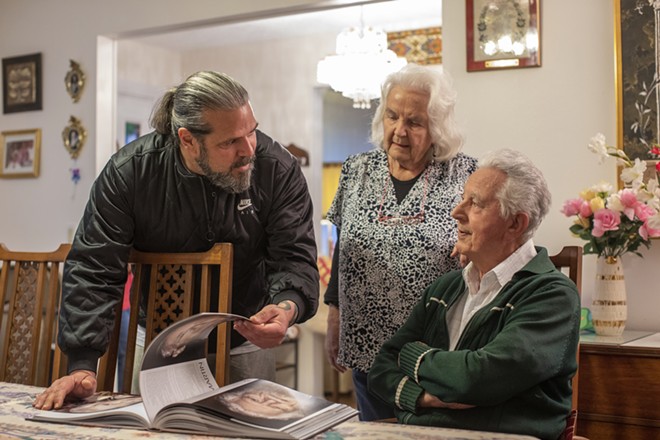 St. Louis native Dee Dee Simon, the chair of the Holocaust Education and Awareness Commission of Missouri, first saw Toscano’s portraits around the Lincoln Memorial Reflecting Pool in Washington D.C. in 2018. She has traveled the world to see Holocaust memorials. “But nothing spoke to me quite like Luigi’s,” says Simon, who is also the co-founder of Conversation Builds Character.

“For me, it's his eyes,” she says. “You have a still subject, right? But yet the eyes in his subjects speak volumes. I just couldn't get it off my heart.”

Simon helped lead the charge in bringing Toscano to St. Louis, who photographed 12 people over three days. Rachel Miller was a St. Louis survivor included in Toscano’s exhibit. Originally from France, she was a “hidden child” — sent away to the countryside during the Holocaust, where she stayed with a Catholic family, changed her name for a period of time and survived. But her mother, father and three siblings did not make it. Miller says she lost 93 people in the genocide.

Since 1995, Miller has traveled around the country, telling her story and stressing the importance of remembering the Holocaust. She spoke at the opening ceremony of Toscano’s exhibit on October 20.

“The speech … is really about not to forget what the Holocaust was like,” she says. “To tell the story about the Holocaust. I'm representing the Holocaust survivors.”
Toscano says he doesn’t do anything special technically. Taking pictures only requires a camera, light, black background and a few minutes.

But the process usually takes hours of time with the subjects, drinking coffee, hearing their stories and making sure they’re comfortable before capturing their images. His record, he says proudly, is eight hours with a subject.

“When he goes in, he's not just going in and taking this picture,” Simon says. “He's going in and he's developing this respectful relationship with these survivors, and that I think comes out in his pictures.”

But Toscano says he’s not a “superhero.” His goal is to keep the memories, the people and the faces of the Holocaust alive.

“I have two beautiful [children], and if something happened in the future and they ask me, ‘Father, what have you done against this?’ then I can show them [my work],” he says. “I will teach them it's necessary to be an upstander, not a bystander, to open your voice if something is wrong in the world.”

This post has been updated to correct the date that Rachel Miller started speaking engagements.