via Youtube/PechaKucha
Goldkamp displays the anonymous message that made him think the hell about cultural and racial diversity.

Nearly a year has passed since local poet Henry Goldkamp began dropping off typewriters around St. Louis. Each acted as a prompt, of sorts: Signs asked passersby to participate in a collective book writing project, titled What the Hell is St. Louis Thinking?

Five-thousand submissions and a Kickstarter campaign later, that book -- curated by Goldkamp and designed by a local graphic artist -- has finally found a publisher, Bottle Cap Press, and a release date: November 22.

"Maybe only a 1,000 were worth a second look," says Goldkamp, a scraggly bearded 25-year-old who spent months reviewing and transcribing messages that ranged from a paragraph to multiple pages in length. Some were short and sweet. Many were short and dumb.

"There were 250-plus that just said 'Poop'," laughs Goldkamp. "But some of them were laid out so beautifully that we're thinking of just scanning them and using those as pages."

The book is divided into the three sections which cover a spectrum of submissions -- from notes describing hardship and loss to poems bursting with hope and joy. The idea, Goldkamp says, is that stacking and arranging the submissions will create something similar to an oral history of the three months when the typewriters were available to the public.

"It's like the city is having a conversation within itself, so it's sort of like a weird, free-thinking time capsule," he says.

One of those early conversations, however, was aimed directly at Goldkamp's placement of the typewriters in areas like the Cherokee neighborhood and the Central West End. He was criticized for appearing to ignore African American neighborhoods. 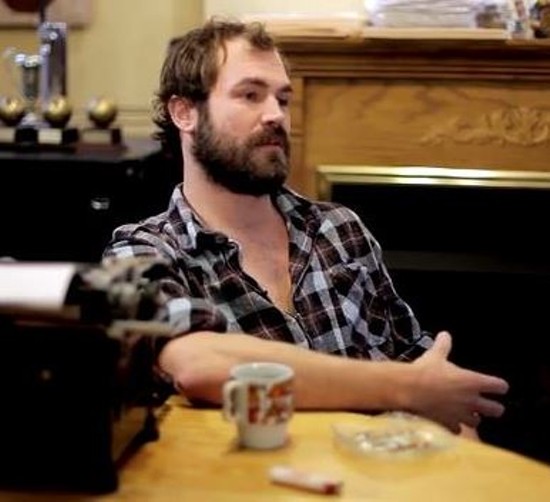 Kickstarter/STL Curator
If you give Henry Goldkamp a typewriter, coffee and cigarettes, he'll give you a poem on the spot.

Goldkamp chose to expand the project to all 79 St. Louis neighborhoods, and he's thankful for the criticism that opened his eyes to the problem.

"There was definitely a hipster congregation in the areas where it first started," he admits. But including voices from all St. Louisans rounded out the project. Though the styles of language varied widely, Goldkamp says "the same emotion was behind them."

Yet, after a year of collecting typewriters, repairing them and hauling them all over the city, Goldkamp is understandably anxious to start something new.

"I've been trying to shake the typewriters schtick from my name. For my next project I do not want typewriters involved."

See also: St. Louis Has a Busking Poet. This Kind of Stuff Makes Our City Cool

Fittingly, What the Hell Is St. Louis Thinking? will be published by a brand-new local company, founded expressly to promote St. Louis writers without the hindrance of heavy-handed editing practices.

"I'm focusing pretty heavily on projects that challenge the concept of exactly what literature is," says Bottlecap Press founder C.A. Mullins, an aficionado of DIY book publishing and a writer himself. "Mostly out-of-the-mainstream stuff, highly conceptual, artistic projects that could be at risk of losing a little bit of soul if too heavily edited."

Here's a sample page from book: (Warning: It's slightly NSFW.)

Mullins announced the deal to publish What the Hell Is St. Louis Thinking? on the Bottlecap Press Tumblr page this week, writing: "Not even the highest expectations can match the raw, emotional brilliance of the collected thoughts and dreams of our entire city."

"I just want to give people what I've been blessed to have been able to see, all these powerful, powerful things," says Goldkamp, musing on the near-completion of a project that seemed like an outlandishly idealistic goal when he began last August.

"You can relate to every single entry, and that's the main thing that I really want to accomplish with the book -- that this all came from a person, and that person is still walking around this city to this day. I want to remind them that is not just a book, but that these are people."