[Update published April 15, 3:00 p.m.: I've uploaded an mp3 file of Curtis Lyle reading from Answer Back; the link is below (search for "Lyle")]

The tribute to Donald Finkel -- yes, that's my dad -- Monday night at Duff's Restaurant in the Central West End drew nearly three dozen poets, each of whom read their favorite Finkel poems.

A slideshow of photos by RFT staff photographer Jennifer Silverberg is available here.

A couple of shots to give you a taste: 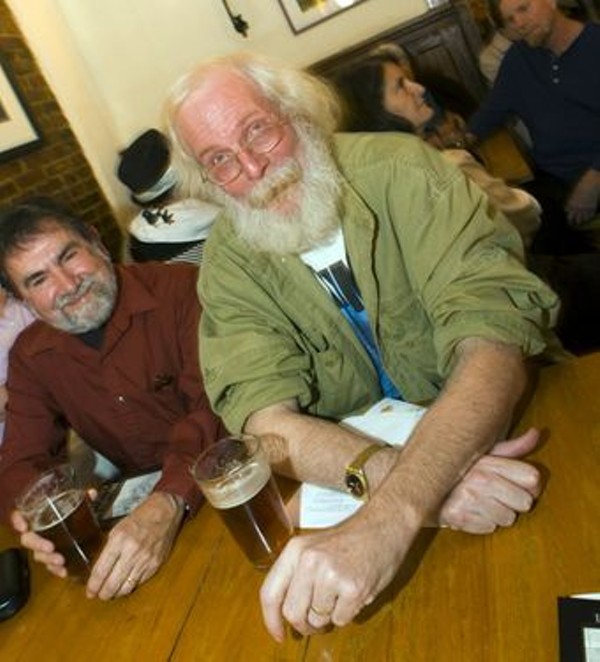 The top one's of two of Dad's best drinking buds, Pete Genovese and David Clewell. Genovese published my father's chapbook-length poem "Beyond Despair," an exploration of the River Des Peres, on his Garlic Press imprint. Clewell, a member of the first class of Washington University's Graduate Writing Program, is one of Dad's closest friends.

The lower shot is of Curtis Lyle, who utterly astounded me with his reading of a section from Answer Back, a book-length poem published in the late 1960s. The poem, which begins as an exploration of caving (a longtime obsession of my father's), blooms into a diatribe on war, racism, myth and art.

Howard Schwartz and Peter Carlos recorded the event (audio and video, respectively; I'm trying to get a clip of Curtis Lyle's reading to post here).

In the meantime, here's the evening's musical interlude, provided on CD from Marty Ehrlich, a brilliant reed player and friend of Dad (who used to babysit me). Marty couldn't make it in person, so he sent this:

And finally, one anecdote, to justify the headline on this blog post:

Tad Richards was a student of Dad's at Bard College in upstate New York during the late 1950s (that'd be before yours truly was even the proverbial twinkle in the old man's eye). Tad, along with Armand Forster, are two of my father's oldest friends. Both had to fly in from out of town in order to participate in the event, Tad from New York and Armand from Oakland.

On the way to the airport to pick up Tad on Saturday night, I tried, and failed, to remember the last time I'd seen him. I did, though, recall the time before that. It was in the late 1970s. I was a carefree rogue with a newly minted driver's license. My sister Liza had just finished her first year at Middlebury College, and my dad thought a father-son road trip was in order. We set out from St. Louis in the family car, which was (always) a VW bus. On the itinerary were stops in NYC and also Bennington, Vermont. The New York visit was a burden on Dad's part -- he'd grown up there, so passing through without pausing to see family members was out of the question -- but pure heaven to me. Better still, it transpired that our time in New York would coincide with a performance by John Lee Hooker at the late, legendary Lone Star Cafe. Amid the requisite visits to uncles, cousins, grandparents, etc., Dad squoze in an afternoon with Tad.

I don't remember much about the Hooker show, aside from the fact that he played sitting down and was entrancing. (Listening to John Lee Hooker, that master of monotone, might be the closest I've ever managed to get to meditation. Standing in the same room with him only multiplies the effect.) My other memory of that show: Waiting in line in the men's room when in walks John Belushi.

I mention Belushi because the next day, over lunch with Tad, I was still basking in the Lone Star glow of Hooker and Belushi, which I proudly imparted.

Tad, I knew, was somewhat of a music encyclopedia. So I shouldn't have been surprised that he'd have a story that would top mine. He warmed up by noting that he'd been Chevy Chase's roommate for a time back in the day. As for Belushi, I believe Tad referred to him as "Fucking John Belushi." He said a friend -- who also knew Belushi -- knew Tad was a blues aficionado and arranged for Tad to loan Belushi his record collection, as the Saturday Night Live star was intent upon being an authentic Blues Brother.

And, carped Tad, Belushi still hadn't returned the records. I believe Belushi went to his grave a deadbeat in the eyes of my father's good friend.

This I briefly pondered as I drove north on Interstate 170.

Twenty minutes later, driving south on I-170, I pondered the punch line that tops this post. How did we get here? I asked Tad if he'd ever been to St. Louis. Yes, he says, in the mid-1960s when he was living in Iowa City. Somehow that led to, I believe, the poet Marvin Bell and thence to some guy named Parker, who, according to Tad, was a ne'er-do-well aspiring writer and also the father of Sarah Jessica Parker.

So, concluded this first of many anecdotes from Tad, "I can tell people that I held Sarah Jessica Parker naked in my arms. What I don't tell them is that she was six months old and I was changing her diaper."

Someone please pass the Patrón.