A busy weekend in St. Louis. Hot weather seemed to put everyone in a sloth-like state during the day, but at night, when temps cooled into the lower 70's, nightlife took off. And some people just took off their clothes.

On Friday night, Jargon, work by Terrance Hughes, Alphonzo Solorzano, Miguel Filipe and Jason Faulkner, opened at the Mad Art Gallery. To see the art and read about the opening, click here. Review by Brian Stitt.

Also on Friday, Lollapalooza music festival got underway at Grant Park in Chicago. We have photos from all three days of the fest. Photos by Mark C. Austin.

Slide Show We also have the Top 15 Rocker Faces of Lollapalooza. Photos by Mark C. Austin. 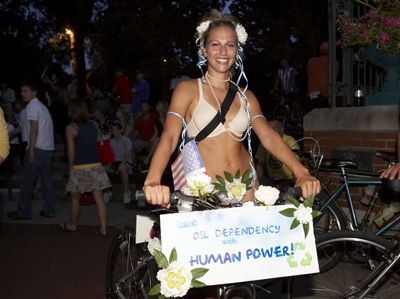 Also on Saturday, the first St. Louis version of the World Naked Bike Ride rolled from Tower Grove Park to Manchester. We have a photo essay of the body-painting, protests and fun of the event. Photos by Steve Truesdell.

Here's what you don't want to miss this week.