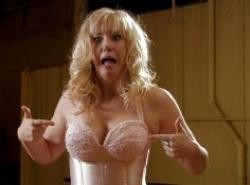 Tonight's the night! St. Louis' lesbian, gay, bisexual and transgender film festival, Stella Artois QFest kicks off at the Hi-Pointe Theatre. The festival, in its fourth year, celebrates the experiences of queer folks around the world, in all their poignant, loony, hysterical, serious and fabulous glory.

The festival begins with a party sponsored by The Vital VOICE at 5:30 p.m. -- your $20 admission fee gets you pizza from Pi, Stella Artois beer, wine from West End Wines, popcorn and snacks from the Hi-Point and a DJ keeping the party groove going, and tickets to the first movie of the festival, The Sons of Tennessee Williams. Online sales for the party are done, but we're told there will be plenty available at the door.

Tonight's flick starts at 7:30 p.m. (And while you can see it without going to the party, why do that?) The Sons of Tennessee Williams is a 75-minute documentary about the gay scene that coalesced around Mardi Gras in New Orleans way back when. There are interviews with now-old men who were part of the happenings back in the '40s and '50s, when being gay was criminal -- but dressing up and peacocking around was totally acceptable in the context of Mardi Gras. Archival footage mixes in and gives a taste of what it was really like. Director Tim Wolff will be on hand.

The festival continues all weekend long, with documentaries, shorts and feature films. Plenty of the screenings will have directors and actors in attendance. Friday night, Riot Acts:  Flaunting Gender Deviance in Music explores trans identity and gender presentation (and bending) in music, beginning at 9:30 p.m.. Saturday's showing of Fishnet at 4:30 p.m. looks like a campy great time, following two burlesque dancing lesbians on the lam (sponsored, natch, by Van Ella Studios). The festival closes with BearCity, which follows a group of hairy huggable gay men around a summer in New York City.

Afterparties and festival specials abound at bars around town. Check out the full screening schedule to plan your viewing, and head to Vital VOICE's Facebook page for the details on partying around the fest.