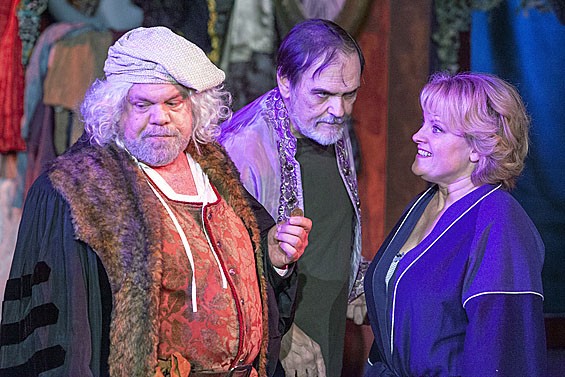 A strange thing happens in Act One of Rembrandt's Gift, Tina Howe's half-baked comedy about the time-traveling Dutch master and the healing powers of art.

As the Dramatic License Productions show opens, we're treated to the beginning of what looks like a powerful drama about two has-been artists whose careers and marriage have foundered on the shores of mental illness. It's the middle of the night, and Polly, a once-promising photographer, can't sleep because her husband, a rusty actor named Walter, has finally mastered his engorged prostate and now snores lustily beside her.

Walter's OCD and hoarding tendencies have been crippling to the couple. Neither has had steady work in years. They're due to be evicted the next day, and their apartment, which once doubled as Polly's studio, now looks like a hamster cage, thick with costumes Walter has draped about.

But then, just as we're settling in for this (albeit grim) domestic drama, who should arrive but...presto chango! The Pride of Holland himself, Rembrandt van Rijn. Fresh from plague-ravaged Amsterdam, the Dutchman, like his hosts, is an artist down on his luck, fallen from fashion with the rise of painters like Johannes Vermeer.

As the inevitable love triangle emerges, Rembrandt's Gift is intended to be an urbane, absurdist comedy that trips lightly atop the weighty issue of what remains when an artist's inspiration (or the public's taste for his or her work) disappears. What Howe delivers, on the other hand, is a silly little play that never transcends the absurdity of its conceit — one brimming with bromides about the artist's fifteen minutes of fame while relying on crude Freudian slips and coarse sit-com confusion for a laugh or two. Thus, Rembrandt just can't get enough of that "wondrous-strange" indoor plumbing, while Polly yucks it up as she describes a vagina to the confused Dutchman, not, as one might expect (given the circumstances), as a "vagina," but rather as a "honey pot," "pussy" and, bafflingly, as a "gloryhole."

Directed by Annamaria Pileggi, the work struggles to move beyond vague generalities and stereotypes. Walter obsesses about those archetypal OCD bugaboos, locks and hand-washing. Meanwhile, Polly rediscovers her "work" — which she earlier compares to Edward Weston and Alfred Stieglitz — while taking snapshots. For his part, John Contini gives a performance that's less funny than it is unsettling as Walter. Unmoored, obnoxious and profoundly unpleasant to be around, Contini shines (albeit somewhat pathetically) as he channels roles past, reciting lines from Oedipus Rex or Cyrano de Bergerac. Dramatic License's Executive Producer Kim Furlow, a fine actor in her own right, has good chemistry with the male leads, but is miscast as Polly. Greg Johnston handles Rembrandt's baroque speechifying fairly well, though a paragraph of speech nearly went missing Saturday night.

There are a few legitimate laughs, but when the night's funniest moment is a sight gag of the Dutch master in a "Rembrandt Rocks" T-shirt, it's hard not to think that Rembrandt's Gift is actually a white elephant.

Jump to comments
« Dirty Dancing: Movie-Turned-Stage-P…  |  A Kid Like Jake: Kindergarten Is No… »