Anything Goes Is a Joyous Romp, Thanks to Cole Porter 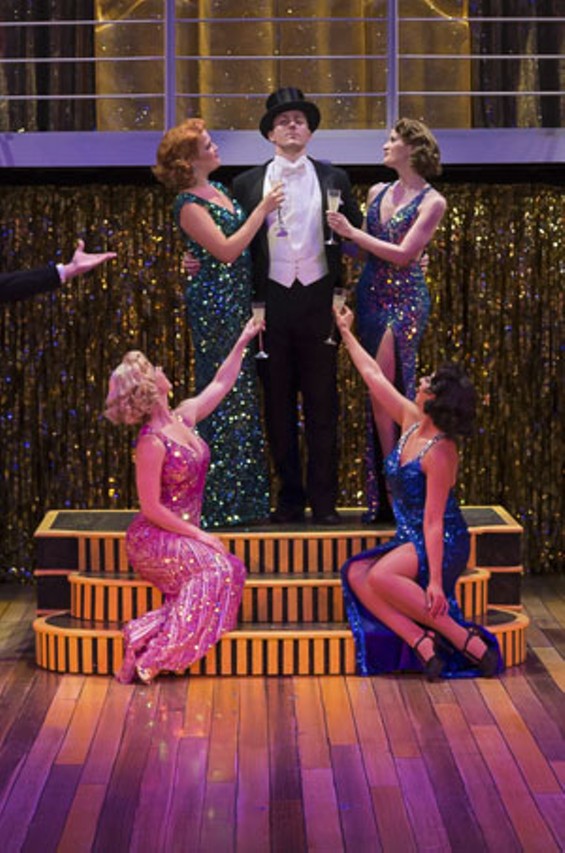 The plot fascinates, the characters spark with life and the dramatic conflicts engender real feeling from the audience, even if only fleetingly. Is it magic? It very well might be.

Director Michael Hamilton and a knockout cast take full advantage of the transformative power of Porter's songs, breathing new life into these standards at every turn. Of course, the most potent of Porter's works are given to Reno Sweeney, played with electrifying appeal by Julie Cardia. Cardia vamps through "I Get A Kick Out of You," and flashes her comic timing in "You're the Top" opposite Brent Michael Diroma, who plays romantic lead Billy Crocker.

Now, about that plot. Crocker is a middling stockbroker who's fallen in love with debutant Hope Harcourt (the winsome Heidi Giberson). Charged by his boss, Elisha Whitney (Whit Reichert), with selling off the company's stock in a doomed enterprise, Crocker instead stows away aboard the ocean liner S.S. America in a desperate attempt to stop Hope from marrying daffy English lord Evelyn Oakleigh (Dan Fenaughty) when they disembark in England. The ship also carries Billy's old friend Reno Sweeney, second-rate gangster Moonface Martin (Bob Amaral), and his boss' moll, Erma (Laura E. Taylor).

It sounds complicated, but don't worry about it -- all of this confusion exists only as connective tissue to bundle together all those marvelous songs. And the fact that every actor mentioned so far finds a way to make his or her character funny and charming in a different way, well, that aids understanding immensely.

Crocker and Giberson are delightful as the star-crossed lovers. He has a crooner's voice and matinee looks, and she has a lovely voice with a subtle dark undercurrent. It gives her half of "Easy to Love" a real sadness that acts as welcome counterpoint to all the silliness around the couple.

Bob Amaral plays Moonface with a classic New York accent and a heart of gold. He rolls his eyes a dozen different ways as he cons passengers out of money, threatens them with his Tommy gun and watches Erma carve a swathe through the ship's crew.

As for Taylor, she can sing, she dances beautifully and she breaks numerous hearts when she belts the bad girl's cautionary tale to smitten men everywhere, "Buddy, Beware." It's a gem of a song, and she slinks her way through it with sinuous delicacy.

And then there's Evelyn, the English lord. Fenaughty hops around the deck with a simultaneously stiff-backed and sprung-knee gait, warbling bungled Americanisms and behaving like an oversized and very polite praying mantis. But in him beats the heart of a great lover: His duet with Cardia in "The Gypsy in Me" is a tour de force of everything that makes Anything Goes such a galloping romp.

In any other show, this would be the song you walk away whistling -- but there's no denying Julie Cardia's protean rendition of the title song at the end of the first act. Her voice is lush and full, but the sheer power that flows out of Cardia when she hits the chorus is felt in the hollow of your being. Unbelievably, she has a fifth gear that lifts up the house during the final refrain. The eight-strong dance corps earn their keep during this number as well, displaying power and grace as they kick perilously close to each other.

If there's an underlying message to Anything Goes, it's that happiness is contagious and there's nothing more pleasant than falling love. That's also the perfect argument for seeing Stages St. Louis' production -- you'll leave feeling happy, because you've fallen in love with Cole Porter.