How a St. Louis Artist Took on Ferguson — and Race Relations — in a Chess Set 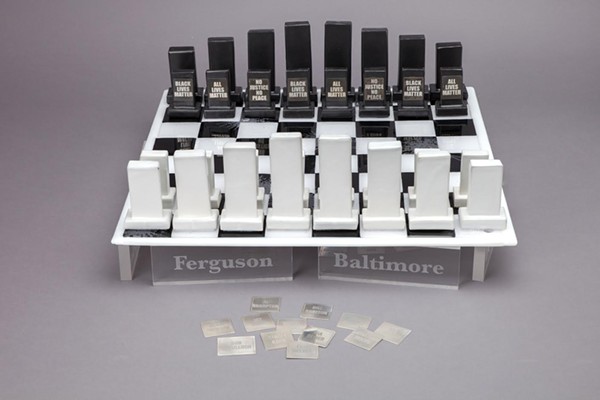 When is a chess set not just a chess set? When it becomes art, perhaps. When it takes on as its subject race relations, definitely.

A chess set on display at the World Chess Hall of Fame beginning Oct. 29 uses the classic board and its pieces to explore the politics of protest in the age of Ferguson. Designed by St. Louis artist Yuko Suga, the set's black chessmen are emblazoned with "black lives matter," while its white ones are crafted to resemble the police shields used by the National Guard to hold protestors at bay.

A University City native, Suga, 46, originally designed the set for a faculty exhibit at the Craft Alliance, where she teaches. After watching the conflagration that followed the police shooting of Michael Brown last summer, she felt compelled to create the piece. Seeing the two sides in a standoff reminded her of a chess board with its two opposing sides, its black vs. white.  "It really generated this feeling where I had to get this out of my head and into the physical world," she explains.

There is no figure in the Ferguson mess designated as king, no bishop given a name. Instead, accompanying the set are silver nameplates for a host of figures including St. Louis County Circuit Attorney Bob McCulloch, Governor Jay Nixon and even Jesse Jackson — all interchangeable depending on which controversy is raging. The idea, says Suga, is to show that even as the standoff remains the same, the political figures change.

Less than a month after the piece was shown at the Craft Allliance, Suga got a call from Shannon Bailey, chief curator at the Hall of the Fame in the Central West End, asking for photos. After seeing them, Bailey chose Suga's board for selection in a new show — Ladies Knight: The Female Perspective on Chess. It's the Hall of Fame's first female-centric show and includes the work of eleven other contemporary female artists, including Yoko Ono. (Her all-white board is titled "Play It By Trust.") The show will be on display through April 17.

Suga is thrilled to be a part of a show that focuses on women and chess. She remembers playing the game as a little girl with her older brother. "He would beat me all the time," she says, "and it was so discouraging. Eventually, you just give up." She'd like to see young women today have a different experience.

Even better if her piece inspires them question their assumptions about race relations, to move out of their entrenched position on the proverbial chessboard. She says, "If people just look at it and it makes them think, I'm happy."

Ladies Knight: The Female Perspective on Chess is one of two shows opening before month's end at the World Chess Hall of Fame, 4652 Maryland Avenue. For more details, see the Hall of Fame's website.