In Edwardsville, Lineup Media Group Is Pioneering a New Model for Podcasts 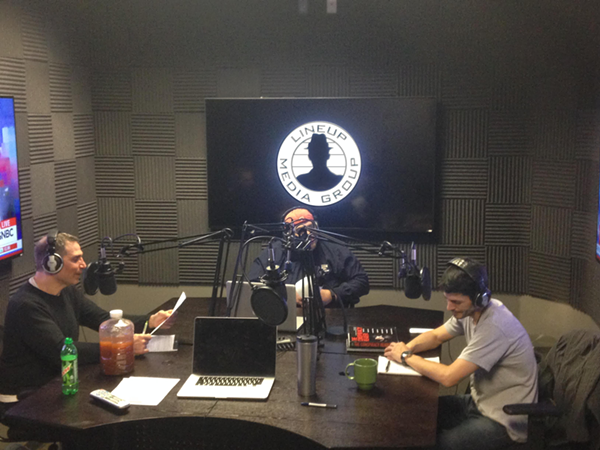 Two National Hockey League stars share stories about the St. Louis Blues. An Armenian man discusses all things related to his home country. A youth baseball coach talks about life and the game.


What do these have in common?


“Everyone’s got a story,” says Fred Licon, the company’s chief operating officer. “Behind everyone you’ve got a pet project, an issue du jour, you’ve got a hobby. And you think, ‘Yeah, who the hell wants to listen to me for 45 minutes talk about mid-century modern furniture or barber techniques?’ But there are audiences out there that wanna cut through.” For them, there’s Lineup.


The company began when Licon, Kris Lakin, and Jeff Cooper — long-time podcast listeners — decided to try a new business model. In their earlier ventures, much of their money went to advertising. But they wondered what would happen if they created a sort of network instead, one where they could use podcasts to promote other podcasts. Especially if that content was hyper-specific to what they — and their audiences — wanted to listen to. “Why pay for it?” Licon remembers the group thinking. “Let’s create our own.”


The project began small. Cooper decided to start a show where he drinks whiskey and talks philosophy with guest stars. They drew in family and friends, finding their quirks and foibles, asking them to talk about the things that captivate them. They recorded in what Licon calls “our own little sound laboratory.”


Their motto? Licon says, “We gotta give voice to people who either feel they have no forum—or for those that already feel they do, provide them the mechanism to do so easily. Let talent be talent.”

This philosophy results in a particular business model. While they find people who have something to say, Lineup Media Group does all the work that lets them say it (including editing, circulating, analyzing, and advertising the podcasts).


For Darren Pang, former National Hockey League player and current media personality with the St. Louis Blues, that meant he could have a show with his friend Kelly Chase, who also used to play hockey and now comments on the Blues for KMOX.


In the show, Chasen Pucks with Panger, they chat about the inner workings of the NHL. And that’s all they do. He says, “[We] put our entertainment and our stories together, combine that with guests, whether NHL or other entertainment friends that we know in the business.” Lineup Media Group puts the show together and gets it online.


With his busy schedule and lack of technical expertise, Pang normally wouldn’t be able to host a podcast. Without the work done by Lineup Media Group, Pang says, “We wouldn’t be able to pull it off, and if we could it would be no good. The content because of Kelly and I would be fun, and there’d be great chemistry, and all that, but the quality would not be there, the organization would not be there.”

On this model, anyone who has a good idea can do podcast, regardless of how much time and money they have. Lineup’s only take is a cut of the revenue they bring in. “In all reality, they aren’t ever paying us ever,” Lakin says. “We get paid and the talent gets paid and we monetize the show.”


In part, this model works because podcasts have been growing greatly in the past few years, and cater to a demographic that is highly desirable for advertisers. Lakin is confident that podcasting, as a medium, will continue to gain traction in the United States.


Pang says, “What we all like about ours is the stories that we’ve got.” Hockey fans really like fun stories and relationships, he adds, and that’s what Chasen Pucks with Panger has to offer. “On a mainstream time, you just don’t have the time to dive into it,” he adds.